In Conversation: Laure Rondi-Reig and Tom Otis discuss the cerebellum

In Conversation: Laure Rondi-Reig and Tom Otis discuss the cerebellum

One of the best things about our work at the SWC is that we get to invite top scientists from around the world to come and speak to us. Their lectures are always illuminating, but it’s the one-to-one conversations that happen during the visit that often have the largest impact.

When Dr Laure Rondi-Reig visited London in December, SWC Chief Science Officer Tom Otis couldn’t wait to discuss her hypothesis that the cerebellum plays an important role in the calculation of self-motion during navigation, and how the field has changed since she first started her work. What follows is an excerpt from their conversation, which has been edited and condensed.

Tom Otis: To start off I want to thank you for giving such a fascinating seminar at the SWC.

Your work makes a strong case that vestibular-based and maybe vision-based calibration is critical for using self-motion in navigation. It is also interesting to think about how broad mechanisms like this—in particular whether, for example, sequence-based memories, or episodic memories—could be calibrated.

You touched on this a bit in your talk, but I wonder, given that sequence-based recollections seem to activate cerebellum, if you think that cerebellar ‘calibration mechanisms’ like those involved in self-motion may also be participating in sequence-based or episodic memories?

Laure Rondi-Reig: This is a good point. As I mentioned during my talk, sequence-based navigation, which is a good proxy for episodic memory in humans and episodic-like memory in mice, is associated with co-activation of hippocampus and cerebellum, but not all cerebellum. Crus 1, a hemisphere part of the cerebellum cortex, is particularly involved. This co-activation suggests functional connectivity between hippocampus and the ‘cognitive’ part of the cerebellum during sequence-based behaviour.

The next logical question concerns the role of the cerebellum in such tasks. The experiment that comes to mind is an unpublished one in which we trained mice to alternatively find fixed and random rewards. The objective was to compare cerebellum-hippocampus interaction during either optimal trajectory to a fixed reward or pure exploration.

We set up an experiment with a fixed reward in the centre of an arena, and others arranged around the perimeter. When the mouse reached the fixed reward position, he received a rewarding intracranial stimulus. However, to get a second reward, the animal needed to go to one of the random reward positions. This arrangement incentivised mice to explore and get the additional rewards. We wanted to see whether mice trained this way could optimise their trajectory. Using cerebellar mutant mouse lines we tested if the cerebellum is required.

What we observed is that control mice developed an optimised path that allows them to sequentially visit the different sites where the rewards were located. This sequence-like behaviour never developed in cerebellum-mutant mice. 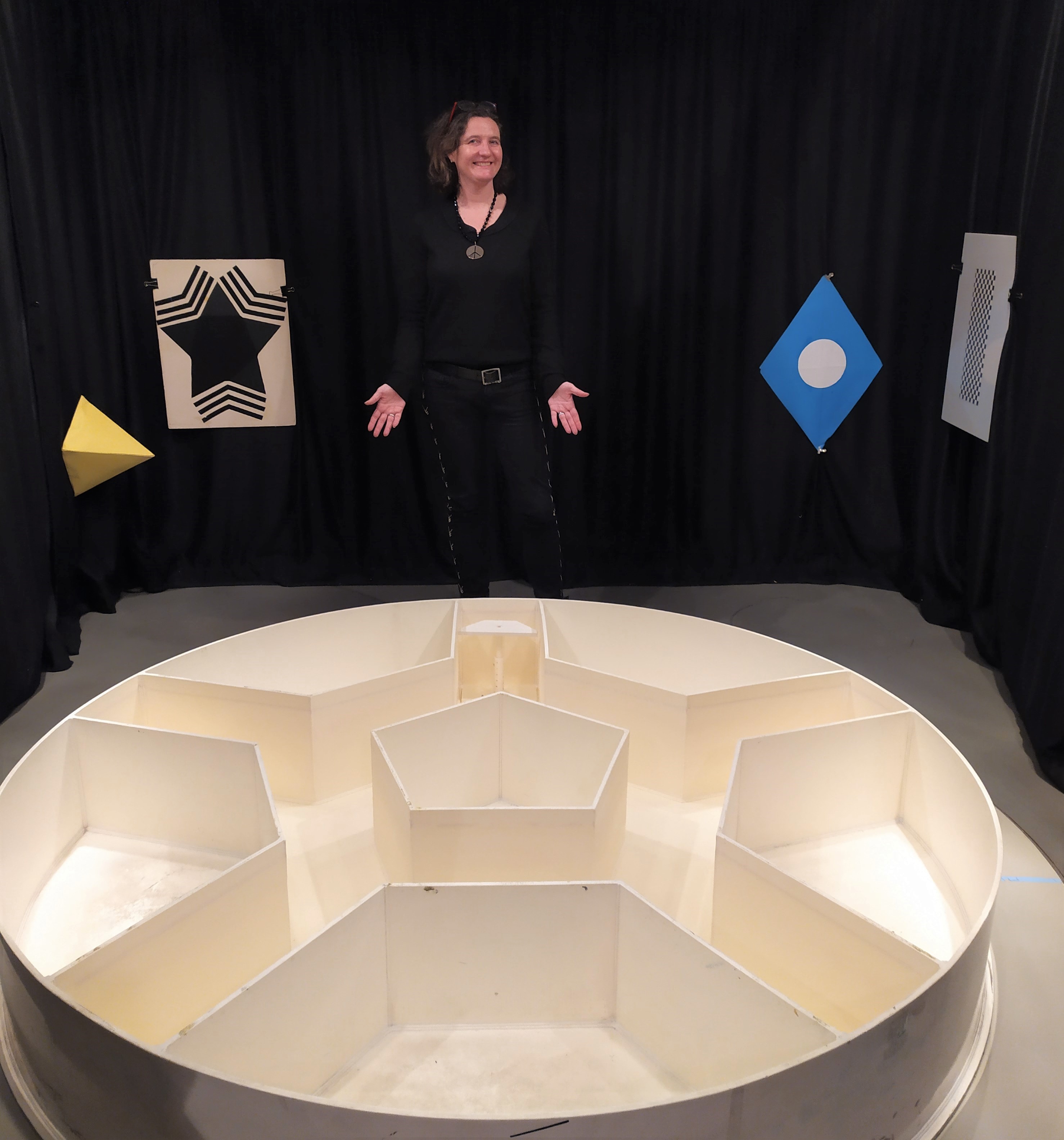 Laure Rondi-Reig with the 'starmaze' task her lab used to test for sequence-based memory.

TO: That’s really interesting. You’ve been doing work on the cerebellum since early in your career. Was the scientific community ready for hypotheses like this when you started?

At the first international meeting I attended I was already talking about cerebellum being potentially involved in spatial navigation. My title was ‘Is the Cerebellum Ready for Navigation?’, sort of implying, ‘is the community ready to realise the cerebellum is part of the brain network involved in navigation?’ Just before my talk, Peter Strick presented this new idea that the cerebellum is connecting to the prefrontal cortex, which was a pretty ground-breaking idea. But he received a lot of push-back. In a subsequent presentation the speaker put up a picture of Joan of Arc burning and said ‘everybody saying cerebellum is involved in cognition will finish like that!’

My presentation was just after that. When I gave my talk, I have to admit that I was rather worried to conclude that the cerebellum played an important role in spatial navigation... Quite an experience indeed!

Fortunately, the field has moved on quite a lot since then. I think the evolution of the cerebellum field is great. The Gordon Research Conference on the Cerebellum really makes a difference, because it’s clearly inclusive. We now meet every two years and the atmosphere is really friendly with very rewarding discussions and open to new ideas. I think the field is now fully prepared for new ideas and interactions with other fields of science; this is also a trend that I see at our annual meetings of the France Cerebellum Club.

TO: Thanks so much, Laure, for a great seminar and a great conversation.

Dr Laure Rondi-Reig is Director of Research at the CNRS (National Centre for Scientific Research) and Director of the Scientific Council at the Faculty of Science and Engineering of Sorbonne University. She obtained her PhD in Neuroscience on the role of the cerebellum in motor learning and spatial memory at Sorbonne University and then completed a postdoctoral fellowship at the Massachusetts Institute of Technology (MIT) in the laboratory of Susumu Tonegawa.