How do prey rapidly learn to escape to safety when under threat? We know that natural habitats are complex and an animal’s route back to the burrow may be laden with obstacles. Somehow, prey species must learn to perform efficient, multi-step escape routes in very limited time.

Researchers at the Sainsbury Wellcome Centre investigated the behavioural strategies of mice faced with the challenge of navigating to a shelter in response to threat when their direct path is blocked. While past research has typically focused on one of two traditional strategies for modelling complex navigation, this new study suggests that, in natural scenarios, mice can instead use a hybrid approach called subgoal memorisation.

Decades of studies have led to the development of two well-described strategies for computing multi-step routes: the taxon strategy and the cognitive map strategy. In the simpler, model-free, taxon strategy, animals learn a route by repeatedly practising a set of actions, for example running towards a particular landmark. By contrast, in the model-based cognitive map strategy, animals explore their environment and incorporate this into an internal map, which they then use to compute the best path to their goal.

While this dichotomous framework has been very effective in describing behaviour in tightly controlled experiments, researchers at SWC wanted to find out how well the strategies would match up with aspects of real-world navigation, such as how animals go from being completely naïve to exploring new, complex environments on their own and gleaning spatial information that is critical for their survival. 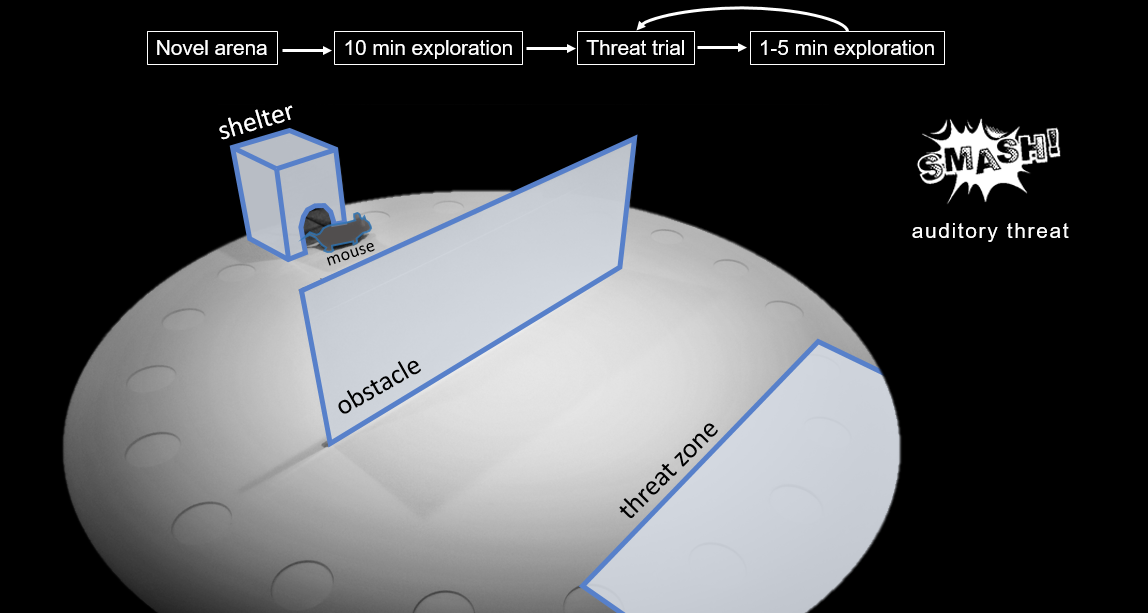 The SWC researchers studied how mice navigate past an obstacle blocking their path to shelter during escapes.

Philip Shamash and the Branco lab team found that escape behaviour could help them unravel the behavioural strategies mice use to navigate in new environments. Instinctively motivated, mouse escape behaviour provides a relatively unbiased way to observe spatial leaning as the researchers can study the animal’s first trip outside its home cage, without needing to first pre-train the animal to learn a new task.

In a new paper, published in Nature Neuroscience, the team describe how they first determined whether animals instinctively know how to get around obstacles or if it is something that is learnt. By using an auditory stimulus to simulate a threat, the researchers observed that mice initially run directly towards the shelter and use their senses to navigate around the obstacle blocking their direct path. This inefficient strategy is based on instinct, however after 20 minutes of experience the mice learn a more sophisticated escape strategy by running towards the edge of the obstacle and then towards the shelter.

“Through their own, self-generated patterns of exploration, mice learn efficient routes in space that are not purely based on sensation as they can’t see their goal, but instead reflect a more cognitive approach. When we looked at the escape trajectories following auditory threats, we could identify the approach that they preferred, which was to find subgoal locations that could help them get to safety more efficiently,” said Philip Shamash, SWC PhD student and first author of the Nature Neuroscience paper. 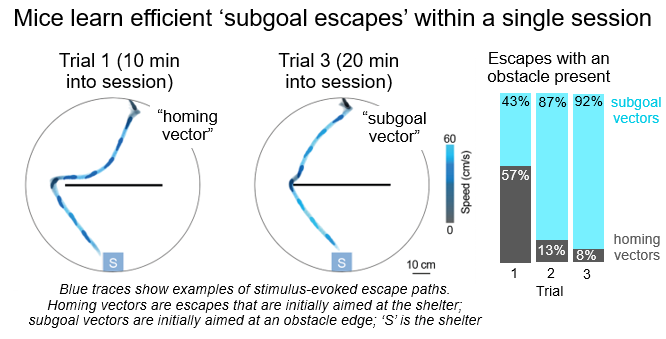 As would be expected from the cognitive map strategy, the researchers found that even when they turned the lights off, mice still remembered the subgoal location and could navigate towards it before heading to the shelter itself. This indicated that spatial learning was involved. However, the behaviour didn’t fully fit the model-based strategy, as subgoals did not appear to be learnt by how well the mouse investigated features of its environment, such as the obstacle.

Instead the team found that mice learn by practicing ‘escape-like’ movements during spontaneous exploration when there was no threat present. It is during these instinctive practice runs that mice form subgoal memories. The overall behavioural strategy therefore combines elements from both taxon and cognitive-map navigation to enable mice to learn rapidly by practice through memorising locations. This hybrid approach involves the learning strategy of model-free actions but the outcome is a map of locations in space.

The researchers also found that once mice had learned to take these subgoal trajectories, they continued to do so even when a shortcut was available, such as when the obstacle was taken away. Again this did not fit the expectation of a model-based strategy, as cognitive maps are dynamically updated. But what was causing the inflexibility of this hybrid approach and is this specific to escape behaviour?

One hypothesis is that there is a trade-off between how long the brain has to compute a response, versus how sophisticated it can be. Thus when mice face an imminent threat, they compute something very quickly yet this comes at the expense of flexibility. The researchers tested this theory by carrying out the same experiment geometrically but instead using a less urgent food-seeking task. They found that mice were still inflexible and ran at subgoals that no longer existed in the real world. This indicates that the hybrid approach is not just a defensive behaviour but rather a more general mechanism for computing multi-step routes to goals.

Implications for neuroscience and machine learning

The discovery of this intermediate approach in between model-based and model-free strategies will be important for neuroscientists when mapping how brain activity allows animals to learn locations in the environment. Philip Shamash and team are now utilising subgoal behaviour to test different theories of how goals are encoded in the brain in the hippocampus and superior colliculus.

In addition to helping neuroscientists understand real behaviours, this study also has implications for machine learning. Instead of the traditional model-based/model-free dichotomy, this hybrid strategy suggests we can endow agents with practice abilities to help them learn a model of their environment.

A new preprint from the SWC examines how instincts and learning work together to generate effective spatial navigation in mice.