OpenWorm, a community of scientists, programmers and citizen scientists dedicated to creating the first virtual organism in a computer, recently held an Open House at Sainsbury Wellcome Centre involving an afternoon of talks, demonstrations and discussions.

The afternoon began with a talk by Stephen D. Larson, PhD, Project Coordinator at OpenWorm Foundation, who outlined OpenWorm’s mission: to build the world’s first digital version of a multicellular organism by developing a framework to build a comprehensive computational model of a very small microscopic animal called C. elegans in close collaboration with the scientific community.

The impetus for building this organism, Stephen explained, is to answer questions on how the nervous system in C. elegans works in order to help us understand how the human brain works.

C. elegans has been specifically selected for a lot of biological research due to certain qualities and characteristics. First of all, C. elegans only has 959 cells in its entire body and only 302 neurons. The organism has the ability to reproduce and all of those cells are identifiable as the developmental pattern is very well-known.

In comparison, it is not possible to identify all the cells in the human brain, which is composed of trillions of neurons and the communication between these cells, and their electrochemical properties, is thought to be key to understanding how the brain works.

Despite the fact that scientists have been studying C. elegans for many years, and have known all the connection patterns of its brain for 30 years, Stephen explained how scientists are still doing ground-breaking research right now to better understand how it functions.

Stephen described how OpenWorm have taken inspiration from the magnificent things that we can already do with software. He gave the example of aerospace companies who test devices in the computer before fully building them, which involves tracking and simulating around 2 million different parts. Simulation can involve stretching the wings of a plane, for example, and running test flights to see how wind will bounce off the wings to get a sense of how the different parts interact with one another. Thus you can do things in simulation in mechanical devices that you can’t do very easily in the real world.

In the biological sciences, it is a bit trickier, but a few years ago OpenWorm envisioned what a simulation of a living organism would look like and they arrived at the concept art shown below. 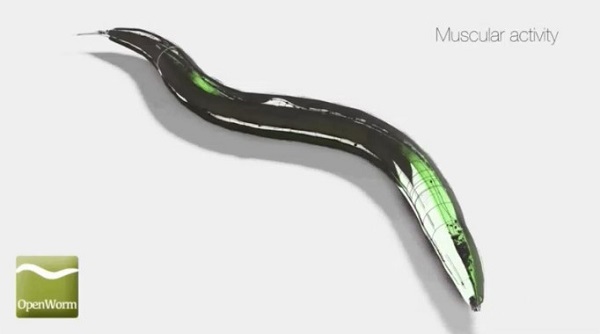 Early on, OpenWorm ran a Kickstarter campaign where one of the prizes was admission to a site called WormSim, which was the beginnings of making the simulation of the worm available to the public through just a web browser, thereby without having to download special software or be a computer programmer. At this point WormSim was more of a movie showing you the results of the simulation rather than running the simulation directly, so essentially it was a platform to host the results online.

Stephen then proceeded to discuss the science behind OpenWorm, describing a 2012 paper by Karr et al., published in Cell, which took an approach to simulating a one-celled organism called Mycoplasma genitalium. This study pulled together several dozen of the molecular biology functions within a single cell including DNA repair, protein modification, protein folding and so forth, in order to investigate questions about how much energy the cell uses and how different proteins are metabolised. 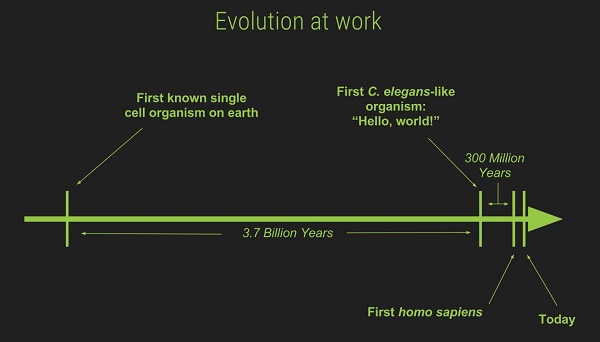 In the next part of the talk, Stephen described the trade-offs in organism simulation between the biological accuracy and the ability to make predictions. OpenWorm are interested in a particular sweet spot: they are not aiming to be able to predict everything, but they want to be able to at least predict the outward behaviour of the organism from knowledge of what the cells of the nervous system are doing.

One question Stephen raised was how much biological accuracy do we need to achieve to hit this sweet spot? To explore this, OpenWorm are using models with different levels of accuracy and so far they have found that models with more biological accuracy than people have used historically, are enabling better predictions, however, they are hoping that they won’t need to simulate every single atom. 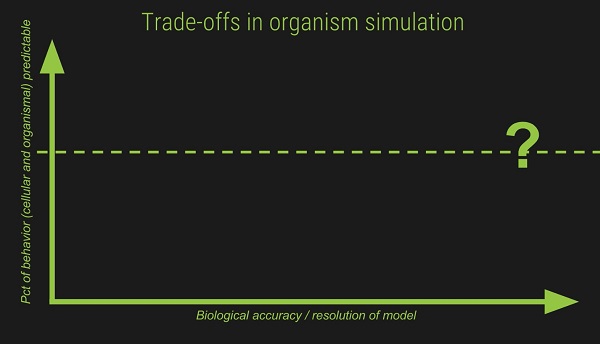 OpenWorm are pulling together data from the community into a framework to simulate C. elegans. Firstly, they have a neural circuit, as C. elegans is currently the only adult animal for which we have a synapse and gap junction level connection graph of how all the neurons come together. The model also contains the muscles of C. elegans, which cause the body to change posture and thereby interact with the environment.

c302 is the name OpenWorm give to the community effort around defining the neural circuits, pulling data together and building this simulation and Sibernetic is the system responsible for the muscle, body and environment simulation. Both c302 and Sibernetic were demonstrated at the Open House event.

After a brief overview of how neurons communicate signals down their length through action potentials and between neurons through synapses, Stephen described the mathematics behind defining these curves that OpenWorm uses to simulate C. elegans neurons. The resulting visualizations are then publicly accessible through an open source platform called geppetto. 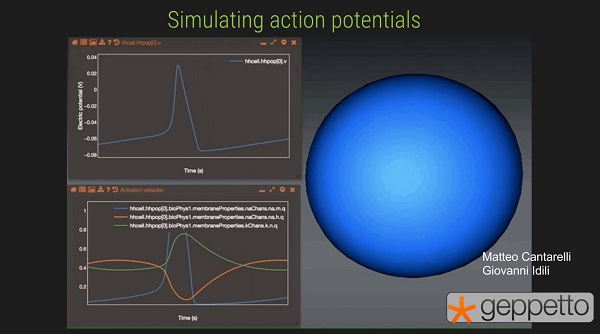 To simulate the cells of a larger organism, it is necessary to fit cells together into larger groups and technologies such as NeuroML and resources like OpenSource Brain, allow OpenWorm to start to assemble these networks of neurons and begin to explore the synaptic structure of neurons for example.

In the final part of his talk, Stephen described how OpenWorm are testing hypotheses of how forward crawling in C. elegans might actually work. As there are gaps in our current knowledge, some OpenWorm community members have used machine learning techniques to do parameter optimization to search for parameters that would allow forward crawling in the simulation. This generates images of activity over time through a Raster plot, which uses a colour scale to show when either the membrane potential, or the calcium concentration, is low or high. By ordering the muscles as they go down the body of the worm from head to tail, the plot shows how the muscles are activated in sequence as they go down the body of the worm and the dorsal and ventral sides alternate. 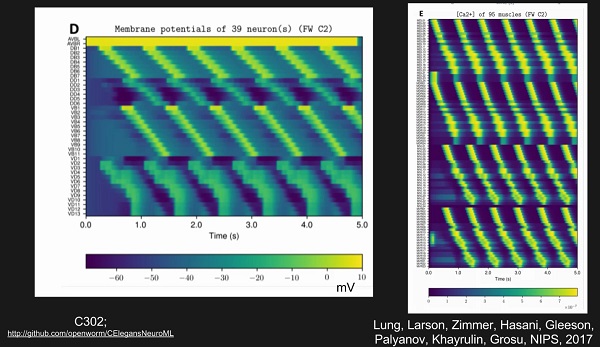 The output of the muscles from the c302 platform is then plugged into the Sibernetic simulation, which is essentially particle simulation doing fluid dynamics as a way to simulate tissues that are bendy and elastic and moving around in an environment.

Stephen then showed a real worm crawling around and compared it with the Sibernetic simulation in its early days and more recent work they have done with colleagues in Vienna to do crawling that is directly reading the outputs of the simulation from the c302.

OpenWorm are still working on mathematically comparing this simulation to databases of real world worms, but for the moment they look to have a platform where they can begin to do something in the nervous system, see the behaviour to close the loop and test more advanced hypotheses in the same environment.

The next goal for OpenWorm is to be able to reproduce ‘tap withdrawal’ behaviour in C. elegans. This behaviour occurs when a worm is crawling forwards and then starts crawling backwards after the side of the petri dish is tapped. To do this, Stephen explained how the worm needs to get sensory feedback, which it turns into neural signals that go through intermediate neurons and result in a motor signal.

This goal will mean that OpenWorm have to demonstrate they have a complete closed loop from the environment, through the sensory neurons, all driven by cellular activity. Once they get to that point, they will be able to remove a lot of the assumptions they put into build the model and add in a lot more biological data and realism to move us more towards being in line with all known data.

Finally, Stephen thanked all the contributors and collaborators of OpenWorm and mentioned a parallel effort that has been taking place for educational purposes to build a version of the worm that is in a robot. The open-hardware 3D printable robot that crawls around was then demonstrated at the Open House. 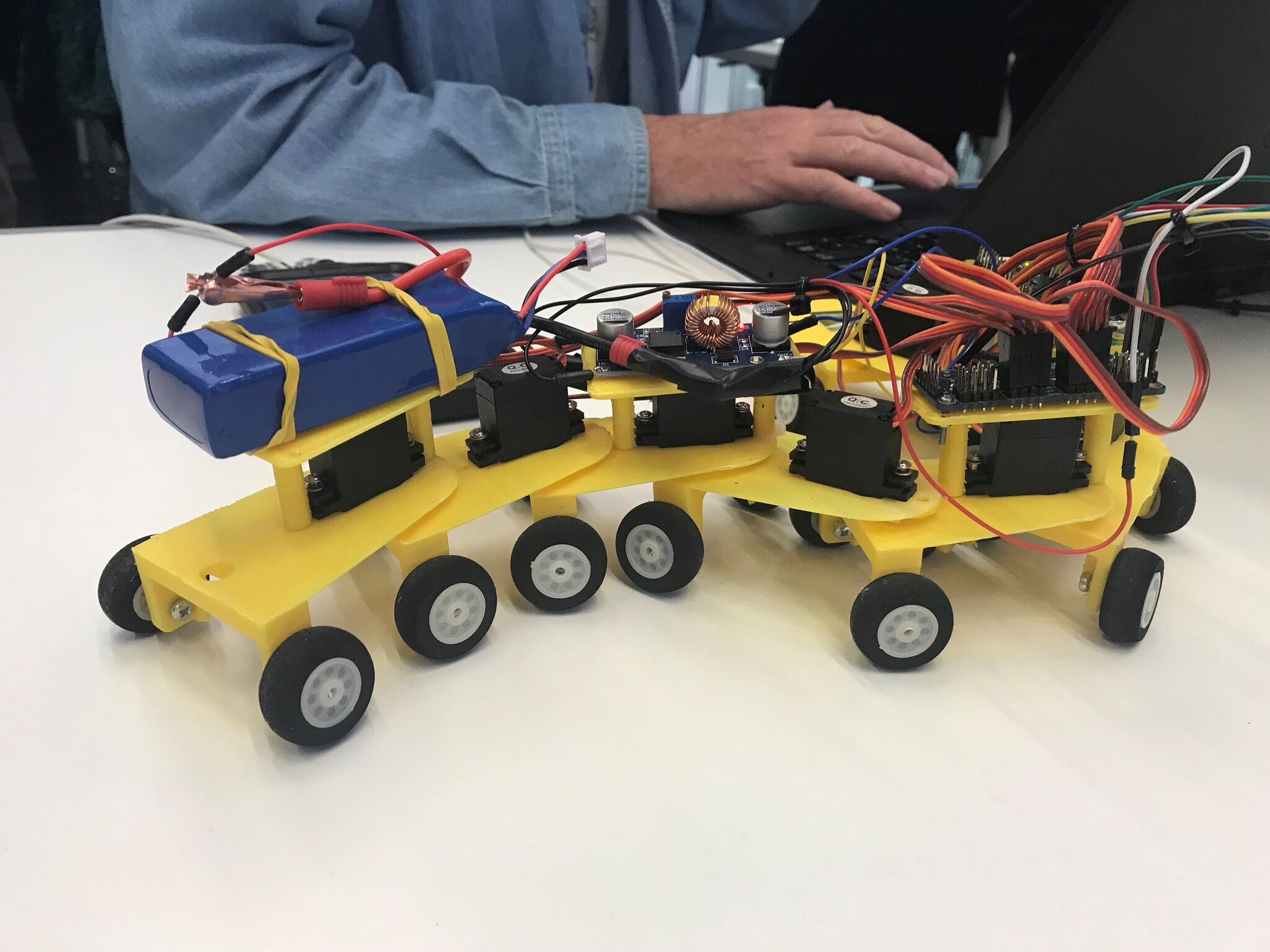 For more information on OpenWorm and how to get involved, please visit: