The somatosensory system plays a pivotal role in controlling movement via its reciprocal interactions with the spinal locomotor circuitry. Although rhythmic motor behaviors such as locomotion can be elicited by central pattern generator (CPG) networks in the absence of sensory input, sensory feedback is required for generating protective reflexes, adapting ongoing movement to environmental perturbations and postural changes, and for shaping complex motor behaviors. Growing evidence support a prominent role of dorsal spinal cord interneurons (dINs) in processing cutaneous and descending inputs. What is not known is how this information is integrated and conveyed to other elements of the motor system to shape both reflexive and corrective movements. By using a holistic approach that includes the combinatorial application of optogenetic, pharmacological and intersectional genetics, we identified few spinal dIN populations that contribute to transform specific sensory stimuli into distinct and often stereotyped motor actions. We have characterized multiple molecular markers: CCK, Calbindin, Calretinin, PKCγ and RORα that define specific dIN subpopulations with “layer-confined” domains of expression in the adult spinal cord. By genetically manipulating the activity of these IN subpopulations (i.e. ablation, silencing and activation) we find a striking correlation between laminar localization and behavior. INs localized in superficial dorsal horn laminae contribute to itch-induced scratch and mechanical-induced withdrawal reflex, whereas those localized in more deep laminae contribute to the corrective reflexes and come into play in more challenging locomotor tasks. Interestingly, manipulating the activity of INs that are not defined by the same genetic markers but are localized in the same lamina induced similar behavioral impairments. Taken together, our data suggest that laminar location is a key element in defining a functional cell population, and that the dorsal horn is organized in coherent heterogeneous layers that are driving distinct motor actions upon coding a certain sensory stimulus. Current efforts are aimed at understanding how layer-specific circuits in the dorsal horn interface with the CPG network and re-configure it to produce distinct sensory-driven behaviors. 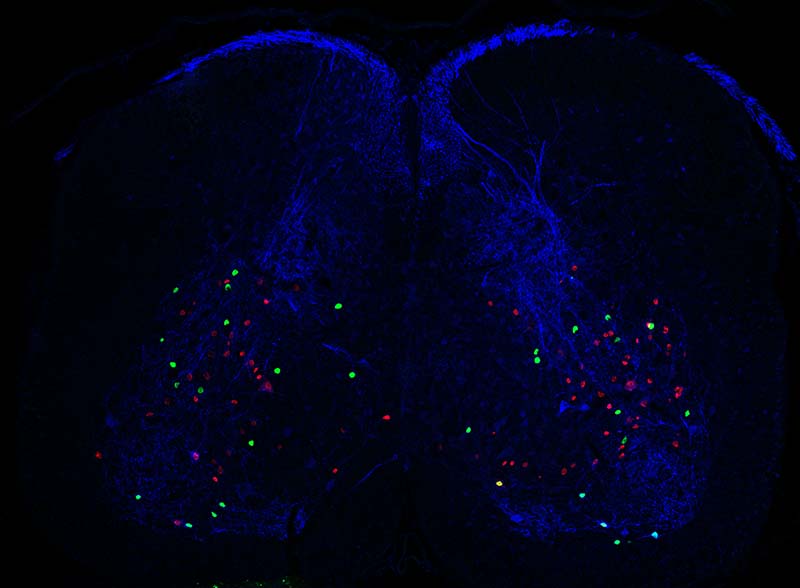 I graduated from the University of Naples in 2006 with a Masters degree in Medical Biotechnology. During my research project I characterized the molecular mechanisms by which the Epstein-Barr virus induces microRNA expression. Following a Summer studentship at the LMB-MRC in Cambridge I moved to the Max Planck Institute of Neurobiology in Munich where I obtained my PhD in September 2013. For my PhD I studied how the modulation of Eph/ephrin and neurotrophic factor signaling regulates motor and sensory neuron guidance while based in the laboratory of Rüdiger Klein. I then joined Profesor Martyn Goulding's lab at the Salk Institute as an EMBO Fellow in September 2014 to study the role of dorsal spinal interneurons in shaping the motor response to aversive stimuli. I am particularly interested in combining genetic, optogenetic and pharmacological approaches to functionally and molecularly characterize the different subclasses of dorsal interneurons involved in processing withdrawal reflex and itching behaviors.