Please note the date and time of this meeting has changed

The primary olfactory, or piriform, cortex has been traditionally hypothesized to facilitate the identification of odourants. A region whose principal role is to support stimulus identification ought to produce a readout that varies little over the animal’s lifetime. For example, absent learning-induced plasticity, odour representations in the olfactory bulb (the principal input to piriform) are stable over several weeks (Kato et al., 2012). Similarly, sensory maps in primary neocortical regions, like retinotopy in V1, are grossly stable (e.g. Shtoyerman et al., 2000; Rose et al., 2016; Jeon et al., 2018). We asked whether piriform, which lacks an analogous sensory map, exhibits comparable stability.

For this we developed a strategy to achieve long-term recordings from fixed populations of single units in anterior piriform cortex and measured odour tuning across weeks. We have made three observations. (1) Odour representations exhibit marked reorganization on a timescale of weeks: a linear classifier trained using responses recorded on one day performs nearly at chance when tested on responses recorded one month later. (2) Odour representations are stabilized if the animal has frequent, regular experience with the stimuli. But (3) this stabilization lasts only so long as regular experience is maintained; otherwise, previously stabilized representations become labile once again.

Piriform therefore seems poorly suited for facilitating odour identification over an organism’s lifetime. Instead it exhibits key features of a fast learning system: regular, non-reinforced, experience is sufficient to produce a memory trace (evidenced by a stable representation), however, this trace is not burnt in and is rapidly overwritten absent frequent experience. We propose that piriform is a highly plastic system that learns statistical regularities in the olfactory environment but without the capacity for long-term storage of that information. This view produces two predictions that we are currently testing: (1) odour identification over the animal’s lifetime is implemented in a parallel system without requiring piriform, and (2) a slow learning system exists downstream to store long-term memories initially encoded in piriform. 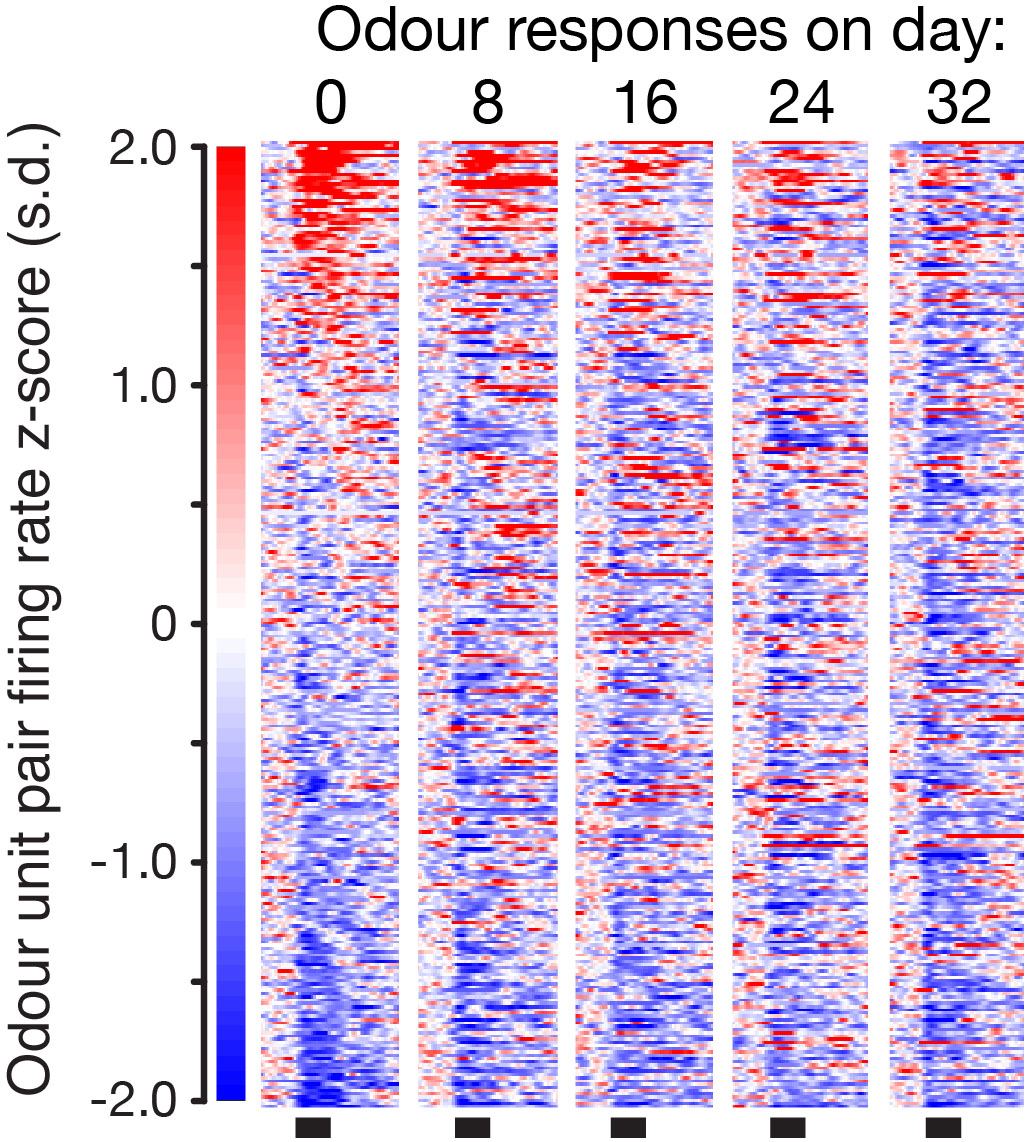 We formed a close collaboration upon joining Richard Axel's lab at Columbia University for our postdoctoral fellowships, during which we have laid the foundations of a joint research program to investigate the neuronal mechanisms underlying non-reinforced learning. We have developed a behavioral assay for the mouse that yields a readout of a subject's ongoing learning of the statistics of olfactory scenes. In parallel we have developed electrophysiological methods to observe the spiking activity of large populations of single units over extended periods of time. This has revealed the primary olfactory cortex to be exquisitely sensitive to the statistics of recent odour stimulus history, and to be capable of predicting future olfactory events based on past regularities.