Cortical layer 5 is a uniquely organized layer with a high fraction of recurrent connections. Recurrent connectivity can underlie rapid changes in a network’s activity state, through positive feedback. Our work focuses on understanding the function and development of this recurrent network.

During unconsciousness induced by anesthesia, we observed synchronous activity in layer 5 neurons across the adult cortex, extending over functionally distinct cortical areas. This synchronous activity is an aperiodic temporal alignment of neuronal activity, independent of the general anesthetic used. In contrast, all other cortical layers demonstrated no consistent change in the synchrony across different anesthetics. Additionally, changes in layer 5 synchrony coincided with the loss and return of consciousness.

To study the development of layer 5, we performed two-photon imaging of embryonic neuronal activity, in vivo, from the inception of the layer 5 circuitry at embryonic day 13.5 (E13.5) until birth. At E14.5, spontaneous activity spreads within a transient two-layered recurrent network of layer 5 neurons. The network then transitions into the nascent layer 5, which shows spontaneous activity with increased synchrony across the population just prior to birth. 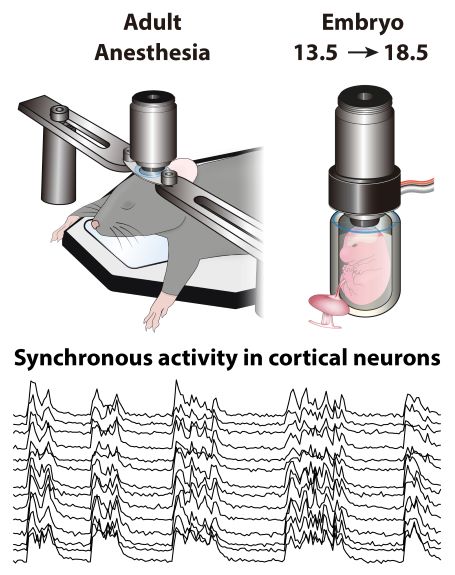 Arjun Bharioke's interest is in the relationship between neural circuit architecture, activity, and function. After early experimental work exploring learned somatosensory behaviours (with Karel Svoboda, Janelia Research Campus), he transitioned to theory, and identified candidate neurons for the elementary motion detector within the Drosophila optic lobe connectome (with Mitya Chklovskii, Janelia Research Campus). In his postdoc, he decided to return to experiment, and joined the Roska lab to study cortical circuits. He became interested in the layer 5 circuitry, given its highly recurrent nature and the presence of spontaneously active dynamical states, making it a perfect testbed to ask deeper questions about architecture, dynamics, and function.

Martin Munz worked initially on natural somatosensory behaviours in the Etruscan shrew (with Michael Brecht, Bernstein Center for Computational Neuroscience Berlin), and became interested in understanding activity-dependent circuit development. By manipulating individual retinal ganglion cell axons within the Xenopus optic tectum, he showed how neuronal activity can modulate circuit architecture (with Edward Ruthazer, Montreal Neurological Institute). His interest in the Roska lab was to explore the role of activity in organizing the developing mouse cortex in the living embryo. Activity in early neuronal circuits is spontaneous, given the absence of sensory inputs. Hence, studying embryonic circuits provides another opening to explore spontaneous activity states within cortex.

Together, in their current work, they utilise their combined theoretical and experimental expertise to identify synchronous network states of cortical activity in layer 5 neurons in vivo both during early development and during unconsciousness.