Neural encoding of social interaction involves the integration of multisensory stimuli in a state-dependent manner. My research is focused on uncovering the cellular basis of social behaviors using in vivo electrophysiological, anatomical and behavioral analysis techniques. In the first portion of my talk, I will discuss work regarding the sex-hormonal modulation of cortical inhibitory activity, which was revealed using in vivo recordings of social touch interactions in female rats. We demonstrate that estrogen is a powerful modulator of PV-positive fast-spiking neurons in the deep layers of the cortex, suggesting a cyclic nature to cortical sensory processing depending on states of sexual receptivity.

In the second half of the talk I will cover new work regarding the neural mechanisms of kinship behavior. Employing in vivo intra- and juxta-cellular recordings, we unveil a novel role for the lateral septum in kin-choice behavior and show that kin-responsive neurons are organized topographically. Together, our results demonstrate that the cellular milieu associated with sensory processing in social contexts is exquisitely organized in cortical and sub-cortical structures of the brain. 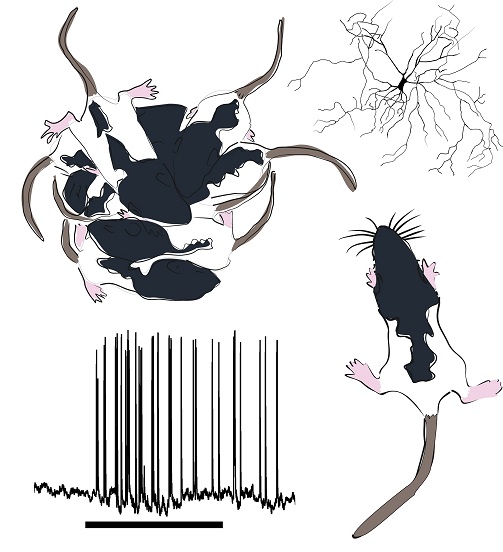 Ann is a postdoctoral fellow in the laboratory of Dr. Michael Brecht at the Humboldt University of Berlin. She pursued her doctoral studies in the laboratory of Dr. Daniel Johnston at the University of Texas at Austin, where she examined dorso-ventral and age-dependent transformations of somato-dendritic intrinsic plasticity in neurons of the hippocampus. Upon completion of her PhD, Ann moved to Germany to learn in vivo recording techniques with the goal of connecting high-resolution neuronal physiology to social behaviors. In her current and ongoing research, she focuses on uncovering the cellular mechanisms of social-sensory processing from a structure-function perspective.