The visual cortex represents not only visual but also behavioural information. Experimental work suggests that the integration of motor and visual signals is mediated by GABAergic interneurons, but how this integration is implemented by the cortical circuitry is incompletely understood. Here we show that optogenetic and behavioural modulations of activity share common features, and that they can be described by a common perturbative framework. We first infer statistical descriptions of V1 recurrent circuitry that explain each cell type's response distributions to visual stimuli of animals in a stationary condition. The inferred connections recover key aspects of observed V1 connectivity, suggesting their necessity for observed responses. We then characterize response distributions to optogenetic perturbations theoretically and link them to circuit stability. We predict that PV but not SOM interneurons show "paradoxical" response of stimulated cells - negative response to positive stimulation -- across stimuli conditions, and verified this prediction via cell-type specific holographic stimulation, in an ongoing collaboration. Second, we infer inputs that explain locomotion-induced firing changes. We find that locomotory drive to VIP cells, which disinhibit pyramidal cells (thought to be one underlying mechanism for locomotion-induced increases of V1 firing rates), is largely cancelled by locomotory drive to SOM cells. This cancellation is described by parameter-independent relationships between responses of different cell types to SOM vs. VIP perturbations, which provides a general mechanism to regulate disinhibition found in this circuit. Finally, we compare the response to optogenetic perturbations in the mouse and in the monkey brain and find that strong recurrent connectivity in the monkey brain could explain the small mean changes with optogenetic perturbation found in this species. We describe a possible network mechanism underlying this resilience to perturbations. This work paves the way to study the dynamical signatures of cell-type specific manipulations of activity, and to guide the interpretation of behavioral modulations the cortex. 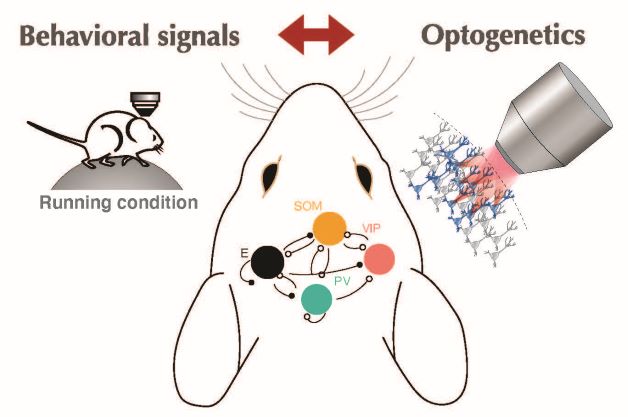 Agostina Palmigiano is a Swartz Fellow at the Center for Theoretical Neuroscience at Columbia University, working in the lab of Dr Ken Miller. She studied physics in the University of Buenos Aires, and was a graduate student at the Max Planck Institute for Dynamics and Self-Organization with Dr Fred Wolf. Her research involves the development of mathematically tractable models with biological fidelity to investigate the mechanisms underlying sensory representations and how they are shaped by and in conjunction with behavior.