In collaboration with FitzFest, a local community music and culture festival, Sainsbury Wellcome Centre was pleased to present ‘Orchestrating the brain’ a stimulating workshop exploring the fusion of music and neuroscience.

The vision behind the event sprung from conversations between musicians and neuroscientists and the shared concepts of neurons in the brain functioning like instruments in an orchestra, but with one perplexing difference – as far as we know, there is no ‘conductor’ in the brain.

Danbee Kim, a neuroscientist in the Intelligent Systems lab at SWC, kicked-off the evening with an energizing talk on neuroscience “in the wild” and the desire to explore how neuroscience applies to the real world.

Through reference to the “watch and wonder” scientific method of Nobel laureates Konrad Lorenz and Nikolaas Tinbergen, Danbee asked the audience a series of thought-provoking questions including “what is music?” before outlining some preliminary studies that indicate music is a language and furthermore it is the first language you are exposed to in the womb through the oscillations of the sound of your mother’s voice. 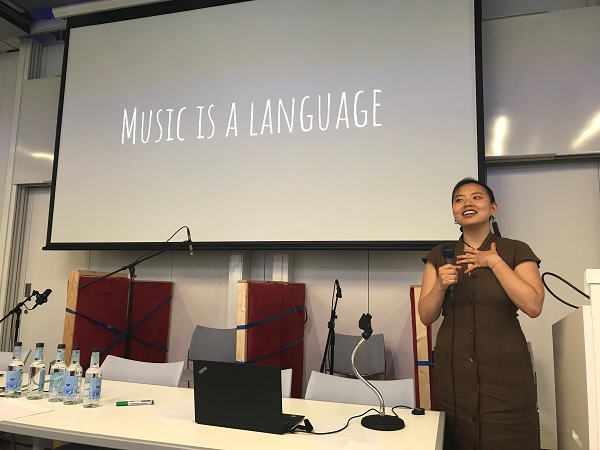 Continuing the interactive nature of the talk, Danbee proceeded to demonstrate that music is coordination and participation through an energetic demonstration of the Pentatonic scale. Cued by seeing Danbee jump through a small number of notes, the audience correctly guessed the next note in the sequence, due to the familiarity of the Pentatonic scale in Western music.

Finally, Danbee discussed how music is personal and although 500 people may be listening to the same symphony they each experience it differently due to the experiences they have had and the neural pathways in the brain that give rise to the feeling of nostalgia.

The next part of ‘Orchestrating the brain’ was led by the very talented FitzFest musicians including FitzFest Founder and Artistic Director, Daniel Bates alongside clarinet player Katherine Spencer. The musicians described how they feel a sense of communicating non-verbally with one another throughout a performance, particularly if they have played together for a long time.

Furthermore, Danbee described a metaphor of trying to put together puzzle pieces in the brain, yet unlike a normal jigsaw, in neuroscience no one has been given the big picture to aim for. To explore these concepts further the musicians used artwork created by audience members as a basis for creating music. Like neuroscientists, the musicians were not given a bigger picture and interestingly the two groups of musicians interpreted the artwork in very different ways to create their compositions.

The next part of the workshop explored the interpretation of neural data through music in an attempt to experience the information in a new way with the hope of picking up new patterns and nuances that perhaps may be difficult to identify by eye. Four musicians were separated physically by booths and audibly by earplugs and noise-cancelling headphones and then shown snapshots of data from Neuroseeker, an electrode that uses CMOS technology. The brain activity data (simultaneous spike rasters from many neurons) looked reminiscent of the punch paper of a player piano.

The musicians were asked to interpret the ½ second epochs of brain activity in musical form for 30 seconds without being able to hear the other performers. The music that they produced together was then played back to them so they could hear how the instruments interacted. And then in the same way that neurons in the brain interact and adjust based on their neighbouring cells, the musicians again donned their headphones and interpreted the next snapshot of data and repeated the process several times to see if they could improve the composition produced. 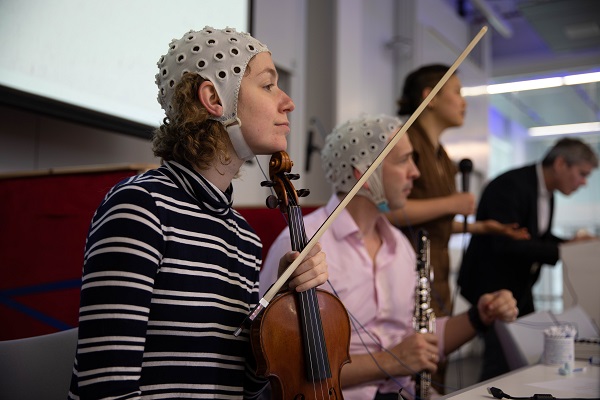 The final live music demonstration involved electroencephalography (EEG) caps being placed on the heads of two of the musicians by SWC’s Chief Scientific Officer, Professor Tom Otis. The musicians then proceeded to play their instruments while the audience watched the data from their own electrical activity recorded from a temporal electrode. The jaw muscle activity activated during each breath was particularly striking to observe and the musicians even performed a real-time improvisation based on their own data, thereby closing the loop!

The workshop concluded with a stimulating panel discussion covering a range of thought-provoking questions from the audience including how the musicians interpreted the neural data, what areas of the brain are involved in interpreting music and why some sounds are more pleasing than others.