How much is currently known about the way movement control is refined by the nervous system during embryonic and postnatal development?

Quite a bit, actually. Many of the populations of neurons found in the brain, brainstem and the spinal cord that control movement have been identified and we now know when these neurons are born, their migration to their final position, and how axons conveying sensory information to these neurons enter the central nervous system.

But what we still don’t have a clear idea of is how these neurons form specific circuits with their local network, for example within the spinal cord, as well as between distant areas of the nervous system, for example between the brainstem and the spinal cord, that ultimately allow movement to become refined during development.

At the same time, the timeline in which movements emerge is well known. So, if we can identify specific circuits that emerge at the same time that specific movements emerge, then we can link a circuit to a movement. If you do this piece by piece, eventually the role of every circuit that exists will hopefully become clear and so we will be in better position to be able to make sense of this very complex network. 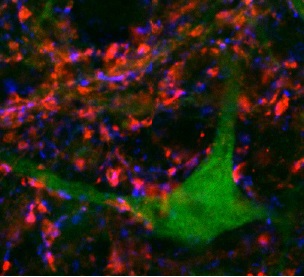 Which specific forms of movement does your research focus on and why?

We mainly focus on locomotion and the main reason is that, surprisingly, all the neural circuitry that’s necessary and sufficient for locomotion are found in the spinal cord.

These two features of locomotion make the problem of understanding how the nervous system controls locomotion much more tractable, relatively speaking.

What techniques do you use to identify specific changes in spinal circuitry that underlie maturation of these movements?

We use a combination of electrophysiology to study the activity of single cells or microcircuits as well as circuit mapping techniques to identify connectivity patterns of  study spinal circuits.

Why is the combination of experimental and computational neuroscience so important?

Our experiments suggest that neural circuits are wired and operate in a certain way, but because there are so many circuits that often interact with each other, it’s hard to test experimentally. You make predictions as to how certain neurons or certain circuits interact and you can test them in a model to see whether your theories are feasible.

In the process of making a model, sometimes you have to make new predictions or make new additions to your model to accurately reproduce a certain behaviour, or a certain motor function. The exciting thing is when you come up with a new prediction, then you can then go back to the bench and test it out to see whether your model’s prediction was correct.

Are there critical periods, similar to those in the development of sensory systems, in which motor systems become properly wired?
Yes, just as for sensory systems, wiring is already in progress during embryonic stages and this developmental process continues after birth.  The degree to which wiring of motor circuits can be modified peaks sometime after birth and then declines with age.

When you’re learning a new skill as an adult, the acquisition of these skills is believed to at least result from modifications in the strength of connections between neurons, most likely in the brain but perhaps also in the brainstem or spinal cord. Whether learning in more mature individuals also involves rewiring is not well studied.

How do these insights help us to better understand the nervous system in mature individuals?

I’ll provide an example of how understanding the development of spinal circuits can help us better understand movements in mature individuals. I have been studying a population of neurons in the spinal cord named dI3 interneurons. These neurons receive sensory information from the skin conveying a sense of touch. I was able to show in my work that during development, dI3 interneurons, mediate the palmar grasp reflex that can be seen in newborn children when you place an object in their hands and they reflexively grasp the object.

When we prevented di3 interneurons from releasing neurotransmitters onto other neurons, the palmar grasp reflex disappeared in mice. We then went on to show that in adult mice, preventing neurotransmitter release from dI3 interneurons prevented mice from being able to increase their grip strength when necessary. So this suggests that during development, the brain learns to control the palmar grasp reflex in a useful manner by allowing us to adjust our grip strength when we need to hold on tight to an object.

The question we asked after this discovery was what changes occurred in the nervous system such that the function of dI3 interneurons matured from mediating a postnatal reflex to the mature control of grasping.

What we found was that there were connections from a particular population of spinal neurons that developed at the same time that the palmar grasp reflex disappeared. This allowed us to show that a particular connection within the spinal cord was set in place to allow a reflex to be controlled in a volitional manner to better control of hand movements

What impact do you hope your work will have on the treatment of motor dysfunction due to injury or neurodegeneration?

After spinal cord injury the connections from the brain and the brain stem are severed, and in some cases they’re completely disconnected based on the severity of injury. Because the spinal cord has circuits that are able to generate locomotion, one of the forms of therapy right now is to train the sensory input to spinal circuits that reside below the site of injury.

This form of physical rehabilitation involves placing spinal cord injury patients on a treadmill with weight support, and then having a rehabilitation specialist aiding the legs to make cyclic movements. The idea being that the sensory input retrains the spinal cord to be able to walk in the absence of inputs from the brain. Training can also be supplemented with stimulation of specific circuit elements in the spinal cord.

Why do you think this technique is limited in humans? Is it because our nervous systems are more complex?

For some reason, spinal circuits in humans have shown themselves to be more resistant to being modified in the adult. Whether this is to avoid any deleterious effects of rewiring of circuits is possible. We certainly know that there are maladaptive changes such as spasticity or hyperreflexias that occur following spinal cord injury in humans. Perhaps the human nervous system is trying to limit these maladaptations.

This is opposed to other vertebrates, such as fish and amphibians for example, where lesions of the spinal cord are often repaired within matters of days or weeks and the injured animal shows locomotor function that is virtually indistinguishable from that of healthy animals.

Clearly, somewhere along the way, we’ve lost that regenerative capability, so that in mammals, as opposed to these other vertebrates, we have more limited abilities for regenerations, and plastic changes in the spinal cord are not necessarily associated with regeneration or beneficial recovery of function, per se.

Do you think it will ever be possible to tap into that regenerative capability in humans?

There are certainly a lot of labs that are investigating whether there are chemical compounds or biomaterials that can promote regeneration, or whether genes can be identified whose activation or repression can encourage regeneration, potentially through activation of stem cells that can be directed towards neurogenesis. So there are a lot of people working on this problem certainly, but right now the solutions have largely escaped us.

What is the next piece of the puzzle you are trying to solve?

Right now we’re moving towards understanding how the influence of connections from the brain stem or the brain to developing spinal circuits can modify the latter so that movements can be refined. We are also trying to understand the changes in spinal circuitry that are associated with recovery of locomotor function in animal models. 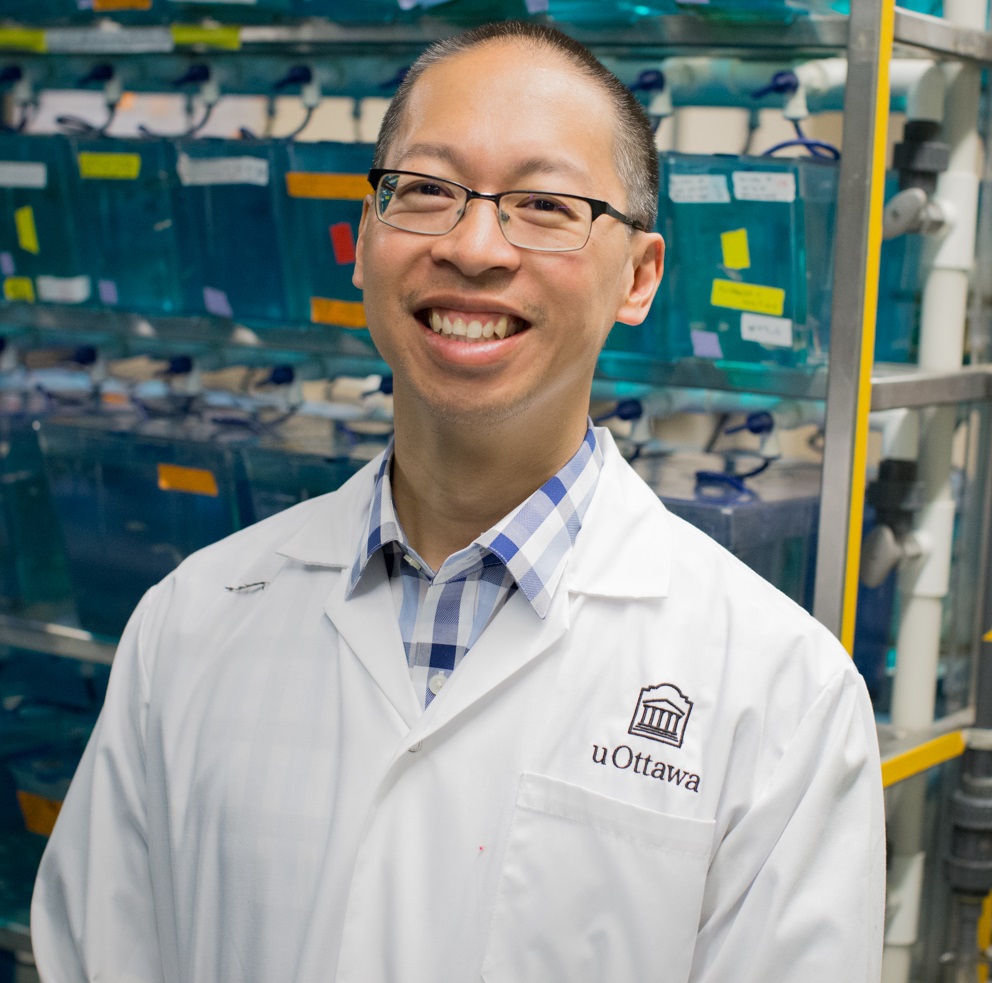 Dr Tuan BuiDr. Tuan Bui is an Associate Professor in the Department of Biology at the University of Ottawa, and a member of the Brain and Mind Research Institute and of the Centre for Neural Dynamics. Tuan has had a long-term interest in the study of motor control and the treatment of motor dysfunction due to injury or neurodegeneration. He completed his PhD in Physiology at Queen’s University under the supervision of Dr. Ken Rose in 2006.  Afterwards, he completed a postdoctoral fellowship with Dr. Rob Brownstone at Dalhousie University where he studied spinal circuits and their involvement in hand control and locomotor activity. During his postdoctoral fellowship, Tuan received many research awards including postdoctoral fellowships from the Nova Scotia Health Research Foundation and the Canadian Institute of Health Research.  He started his lab at the University of Ottawa in 2013, and has since been awarded an Ontario Early Researcher Award. Tuan has focused on studying the mechanisms by which the control of movement is refined during development by changes in spinal circuitry in fish and in mammals.