Professor Loren Frank, Howard Hughes Medical Institute, Kavli Institute for Fundamental Neuroscience, University of California, San Francisco, recently gave a seminar at Sainsbury Wellcome Centre on neural substrates of memories and decisions. I caught up with him afterwards to find out more. 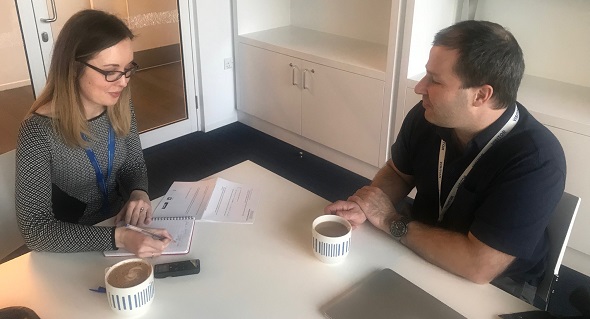 How much is currently known about the way in which the brain uses experience to guide behaviour, i.e. how we learn and remember?

A great deal is known from a behavioural perspective, as we see examples of experience guiding behaviour in ourselves and animals all the time. We also have a reasonable sense of how neural circuits tell the animal do that again or don’t for simple behaviours that give rise to good or bad outcomes.

However, when it comes to more cognitive behaviours, for example exactly how the animal makes choices between different options using memory to guide decisions, we are still at the very early stages in terms of our understanding. 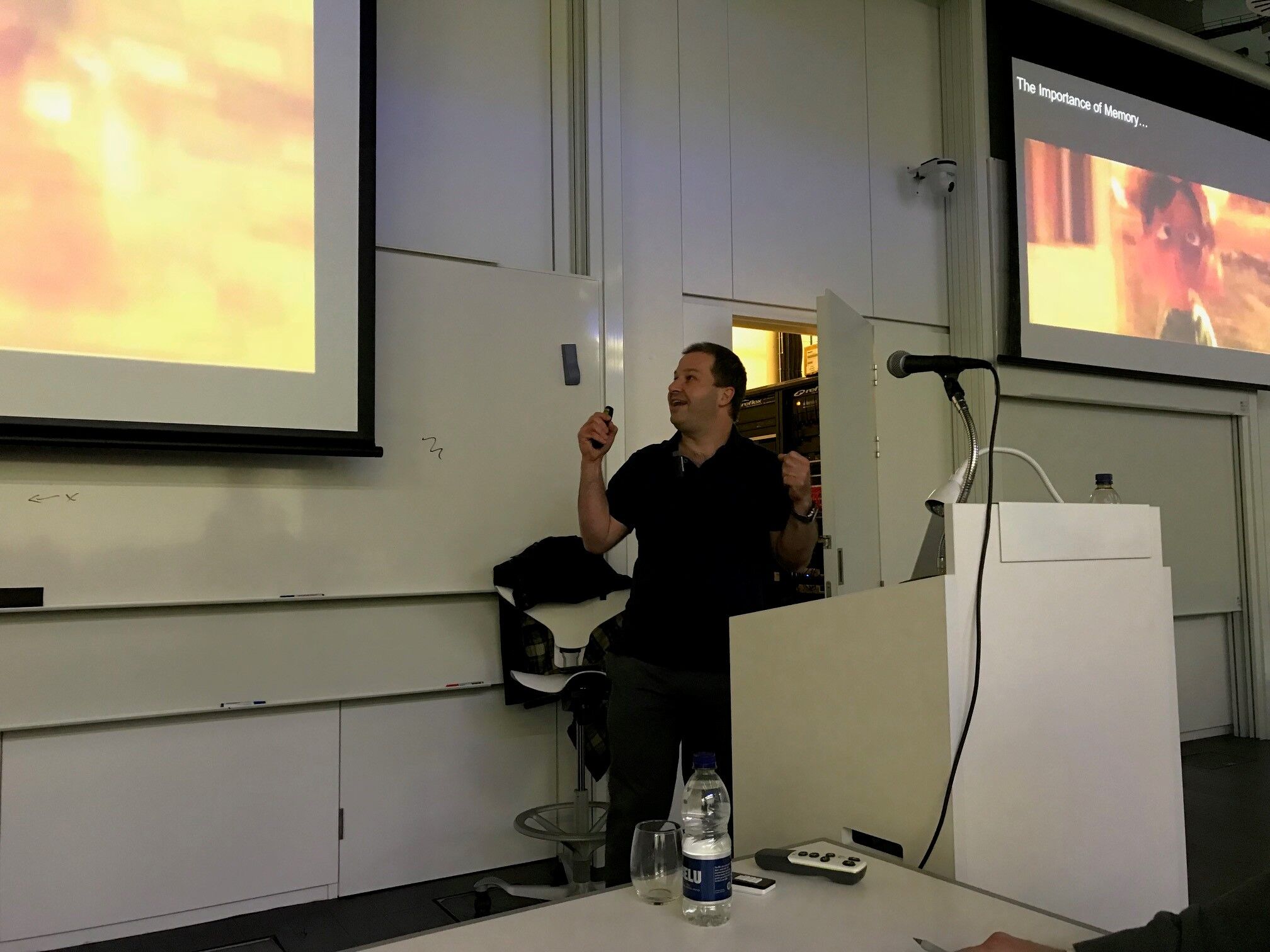 Are memory and imagination two sides of the same coin?

Yes, to a degree. Imagination depends critically on memory, in that it is hard to imagine things that aren’t at least made up of elements that you know. Memory provides the building blocks for things to be imagined.

Memories of things that have happened before also provide the building blocks of imagining possible futures. For example, was this a good idea or not, this worked well the last time and so forth. So memory is certainly critical for imagination.

How is sleep thought to facilitate memory?

The current theory is that sleep is important for something called memory consolidation, a process through which the brain reinforces certain memories. In the case of memories for motoric things, like how to play the piano, how to ride a bicycle, it is very clear that those things can improve after sleep.

In the case of memories of facts or events, they only get worse over time. One theory is that sleep plays a role of extracting regularities from experience. So each of the things we know, we first learn through an individual event, but one of the important things the brain does is to work out which things are regular.

Take learning language for example. We have a lot of knowledge about what words mean, but not necessarily how we acquired the knowledge. For example, say I asked you what is the colour of the inside of a watermelon? You can remember the colour, but you probably don’t remember where you learnt it.

The idea is that our brains have a lot of abstracted knowledge that was originally gained through individual experiences and repetition. For example, a child may call a cat a dog, but over time through repetition they learn what a dog is.

One thought is that sleep is really important for allowing the brain to abstract those regularities as we replay multiple experiences over and over and drive circuits that would generalise from them.

Does this explain dreams?

Dreams are thought to be a mental reorganisation. The memory replay that we see in sharp wave ripple events, tend to occur in stages of sleep that are less associated with dreams, so those may be doing something completely different. 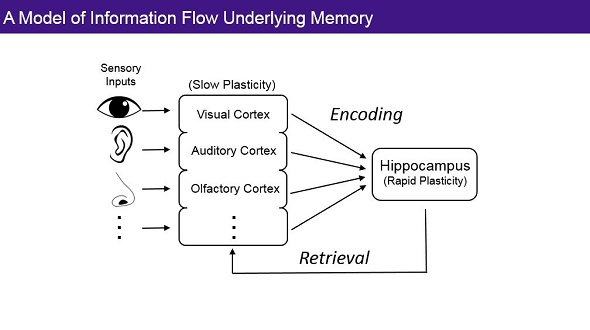 What determines the plasticity of neural circuits and how is this thought to be controlled?

The time of day can also control plasticity, these are known as circadian changes. There are also chemicals called neuromodulators, which vary in levels that can be plasticity-promoting or plasticity-inhibiting.

The brain has lots of mechanisms for turning plasticity up and down and different brain regions have different sensitivities. For example, the hippocampus is an area where we know plasticity can be very rapid as it is a highly plastic area.

The hippocampus is also a major focus for epilepsy in the brain; in this disorder it is thought that plasticity has gone awry. Too much change leads to self-reinforcement of a pattern that triggers seizures.

Other areas seem to be less plastic and take longer to learn. This is regulated by the internal structure and genetics of the area itself.

What methods do you use to try to understand the activity and plasticity in neural circuits and how this underlies learning and the ability to use learned information to make decisions?

The main method we use is extracellular recordings, so we measure the spiking activity of, ideally a large number of, neurons that are active all at once. To complement that, we also use methods where we impose patterns of activity to give feedback to the circuit.

One of the things that we have developed, and continue to develop, are methods called real-time feedback. Detecting what the circuit is doing and interfering with, or changing activity through a specific pattern to try to understand what those patterns are useful for. 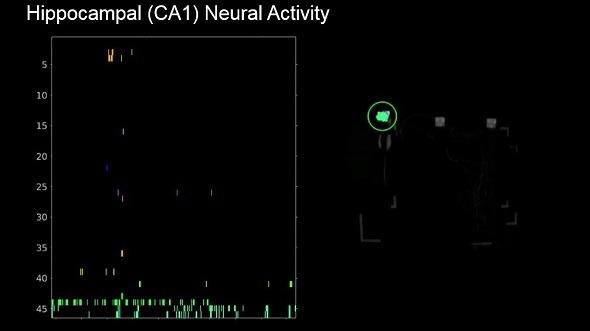 How widely distributed are the brain circuits that these memory processes engage?

Extremely! Everywhere we’ve looked we see changes in activity associated with these memory events to different degrees in different places. Basically, as far as we can tell, it happens everywhere in the brain, at least in cortical areas and some sub-cortical areas. We currently don’t know how far into the brain stem it goes.

There seems to be a lot of regulation of these events, so when one of these events happens it transiently shuts down current processing, as far as we can tell, which then comes back up later. This seems to happen broadly across the brain, which suggests that it is globally regulated and goes to some very important central circuits. 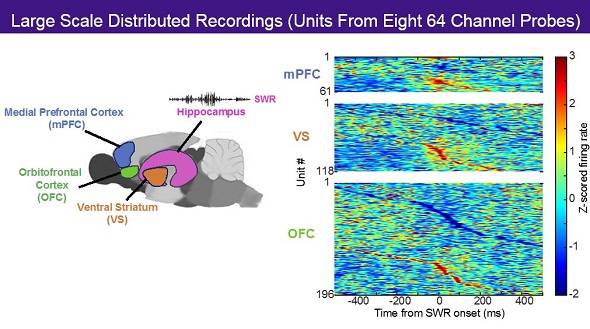 How does your work aim to understand the links between memories and specific distributed patterns of brain activity?

The standard way to study memories in animals is to look at their behaviour. For example, do they remember and therefore can they behave and do the right thing? We define memories more broadly as reactivations of patterns of brain activity, so at a mechanistic level, this is what we think memories actually are.

Obviously, we don’t act on all of our memories or all of our plans, we can select them. So what we are trying to figure out is how is it that the brain can act upon one memory or plan and not on another. By looking at the patterns of activity, we think we get a glimpse into what the memory or plan being activated actually is.

Can you please give a brief overview of your findings of non-local patterns of hippocampal and cortical activity that are well suited to support both learning and memory retrieval?

We see two different kinds of non-local activity. One occurs during something called sharp wave ripple (SWR) events, which are big bursts of hippocampal activity. Here we see things that both could be the animal playing out possible future options, as well as cases where the animal’s brain, or hippocampus at least, seems to activate memories of whole different experiences that happened much longer ago, i.e. mental time travel through events.

This first kind of non-local activity seems to happen when the animal is not moving, or is moving very slowly, so there is not a lot of external input coming in. We also see non-local activity related to future possibilities when the animal is in motion. This is in the context of things called theta sequences, which are brain events that seem to replay future possibilities that the animal is about to explore. We found for example that such representations can alternate between two different outcomes, say, turn left or right, in ways that we think are interesting.

How much evidence is there that rodents form episodic memories and how can the study of this inform us about memory in humans?

Episodic memories are often defined as what happened, where and when and there is certainly evidence that animals can form memories like that and they have a sense of how long ago things occurred, what those things were and so on.

However, in the full sense of episodic memory we often think about the ability to tell a story about something that happened to us and there is no reason to think animals can tell stories!

We think that the hippocampus, which has relatively similar structure across species, is supporting similar functions connecting the various different elements of experience into memories and using those to make plans. Whether we call that episodic or not, is really a matter of personal taste.

In general, what the hippocampus does, and how it does it, seems to have some similarities across species, so the hope is by studying the detail at a mechanistic level in rodents, we can get insight into how it works in humans. Indeed the studies that have been done in humans have found broadly and conceptually similar phenomena.

Typically work flows the other way, in that research tries to replicate rodent results in humans. For example, grid cells were originally discovered in rodents. The problem is that functions that are inherently human, like word-list learning, are not things we know how to probe in a rodent, so there isn’t as much feedback in that direction as there ideally would be yet.

However, I have a colleague who is working in primates that has been trying to adapt some tasks and also do some primate-specific things, so the hope is that by talking more we might be able to arrive at some paradigms that work better across species. 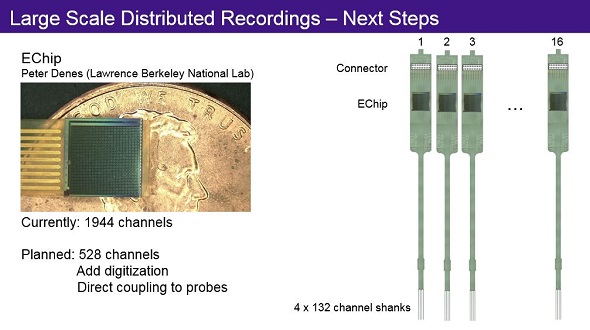 Can you please outline your development of new technologies to enable very large-scale recordings of distributed patterns of neural activity in freely behaving animals? What impact do you hope this will have?

We’ve been working for a number of years on a flexible electrode. Because the brain is soft, we think a flexible electrode will move with the brain and allow us to put large numbers of electrodes into many different structures, so that we can understand how the more complex distributed circuits work and what their patterns of activity are.

This is working well and we can track individual neurons over long periods of time and populations over many months. The hope is that, because the brain is a distributed network, and fundamentally everything that happens in the brain happens because of many areas talking to each other, that these sorts of technologies give us the ability to study the system as it works and also at the scale that it works.

Hopefully we will be able to understand how information might flow from the hippocampus to other cortical areas or flow back again, or how a memory or related activity might form a decision, which might depend on other brain areas.

Loren Frank is Howard Hughes Medical Institute Investigator and a Professor in the Department of Physiology at the University of California, San Francisco (UCSF). He is also the Co-Director of the recently established Kavli Institute for Fundamental Neuroscience at UCSF. He received his B.A. in Psychology and Cognitive studies from Carleton College, his Ph.D. in Systems Neuroscience and Computation from M.I.T. and did post-doctoral research at Massachusetts General Hospital and Harvard University.

His laboratory uses a combination of techniques to study the neural bases of learning, memory and decision-making. In particular, his work focuses on the hippocampus and related structures, brain areas critical for forming and retrieving memories for the events of daily life.
He is also currently working to develop new technologies to understand how the brain works and how to fix it when it is not working properly.