Aggression is an evolutionarily significant behaviour seen in animals competing for resources or in defending themselves, but how does the brain know when to generate this behaviour? Dr Dayu Lin, an Associate Professor at New York University, recently gave a seminar at the Sainsbury Wellcome Centre outlining her group’s effort to understand the circuit mechanisms that generate aggression and how these differ in both males and females. I caught up with Dr Lin to find out more.

Is most aggression innate or can it be learnt?

Aggression is a very sexually dimorphic behaviour and in most species it is more intense in the males than in the females. In this way, aggression has an innate component as you do not require a teacher to learn how to become aggressive.

In females, aggression is modulated by the reproductive state of the animals. In many species, including both vertebrate and invertebrates, the aggression level is generally low in the naïve females but during lactation, when they protect their young, the aggression level drastically increases. This change is believed to be mostly hormonal control.

In summary, aggression is innate, but it is heavily modulated by the experience of the animal.

Are there distinct types of aggression?

In our studies, we try to tease apart the planning stage of aggression and the actual execution of attack. By training mice to do certain operant tasks, they can tell us when they feel aggressive and would like to get an attack opportunity.

In this situation, there is a stage leading to the attack that we consider as a planning stage, i.e. proactive aggression.

How much is currently known about the circuit mechanisms that generate aggression?

We are starting to learn more and more about the circuit mechanisms that generate aggression. We have known for decades that the hypothalamus is important in aggression, but we don’t know the specific population of cells or the specific anatomical locations.

A major goal of our current study is to figure out what are upstream or downstream of this area. We’re using a bottom up approach to pull out the other aspects of the aggression circuit. I think we are gaining a lot of knowledge very rapidly with the new tools we have now.

We have started to learn that a couple of other nodes in the hypothalamus are also critical and we are beginning to understand the upstream of these areas in the amygdala as well as in forebrain areas. But there’s still a huge amount to learn.

There was a recent paper from Dr. David Anderson’s group at Caltech that maps the connection of the VMHvl. They found more than 30 inputs and 30 outputs of the VMHvl. Now, we need to go through all of these inputs and outputs to figure out which one is relevant for aggressive behaviours.

What methods do you use to understand these neural circuits?

In nearly all our studies we use what I call the 3C’s. Firstly, we use correlation studies, where we try to measure the activity in the brain using either electric or optical recordings.

We also do causation studies, where we perturb the brain either by suppressing or enhancing activity and see what happens behaviourally. We use a whole range from pharmacogenetics and optogenetics to older school pharmacology. I think pharmacology still has its value as manipulating cells is different to manipulating receptors. Even though you might suppress a cell, that doesn’t tell you which communication channel is important. Pharmacology is an older method but if gives you the most specificity in terms of which receptor is being targeted.

The final C is connectivity, where we use a variety of tracing methods to understand the input and output. We also use circuit mapping, such as slice electrophysiology to understand the microcircuit and the synaptic connections amongst the cells.

How does aggression differ in males and females both at a behavioural and circuit level?

Male and female aggression differ both qualitatively and quantitatively. In mammals, the broad approach to aggression is similar in terms of how the animal or human is inclined to act using physical as well as communicative means. Within species there are sex specific differences in aggressive behaviours.

Generally speaking, male aggression is much higher than female aggression. Out of curiosity, I checked out the ratio of people in jail, which is not a perfect measure of aggression, but often violence is the cause leading to a person going to jail. The ratio is very biased and in the US, the ratio of male to female prisoners is around 93 versus 7 percent, respectively.

Male and female aggression also differ in other, subtle ways. For example, there is something called the winning effect in the male, which is where after repeated attacks, the aggression level goes up. Whereas in females, as far as I can tell from the literature in rodents, it is unclear if there is a winning effect at all.

Previously, people have considered maternal aggression as a defensive version of aggression, whereas male aggression is more of an offensive level of aggression. So there is potentially that kind of a distinction as well.

At the circuit level, there were some indications in other species, such as drosophila, that there is a fundamental difference in that some aggression related cells only exist in males, and does not exist in females, which might explain the vast difference in aggression.

There are actually two subdivisions in this area, one for female aggression and one for female sexual behaviours. These subdivisions may not exist in the males. So there are differences in the detailed anatomical organisations, but, at least so far, we have no evidence that there are certain regions that are completely missing in the females for mediating the aggressive behaviours.

Understanding the circuit is still a major goal of our research as we’re only at the beginning. I’m also interested in how experience modifies a circuit, there appear to be a quite a bit of a plasticity in this circuit in terms of both the cellular level and the synapse levels. 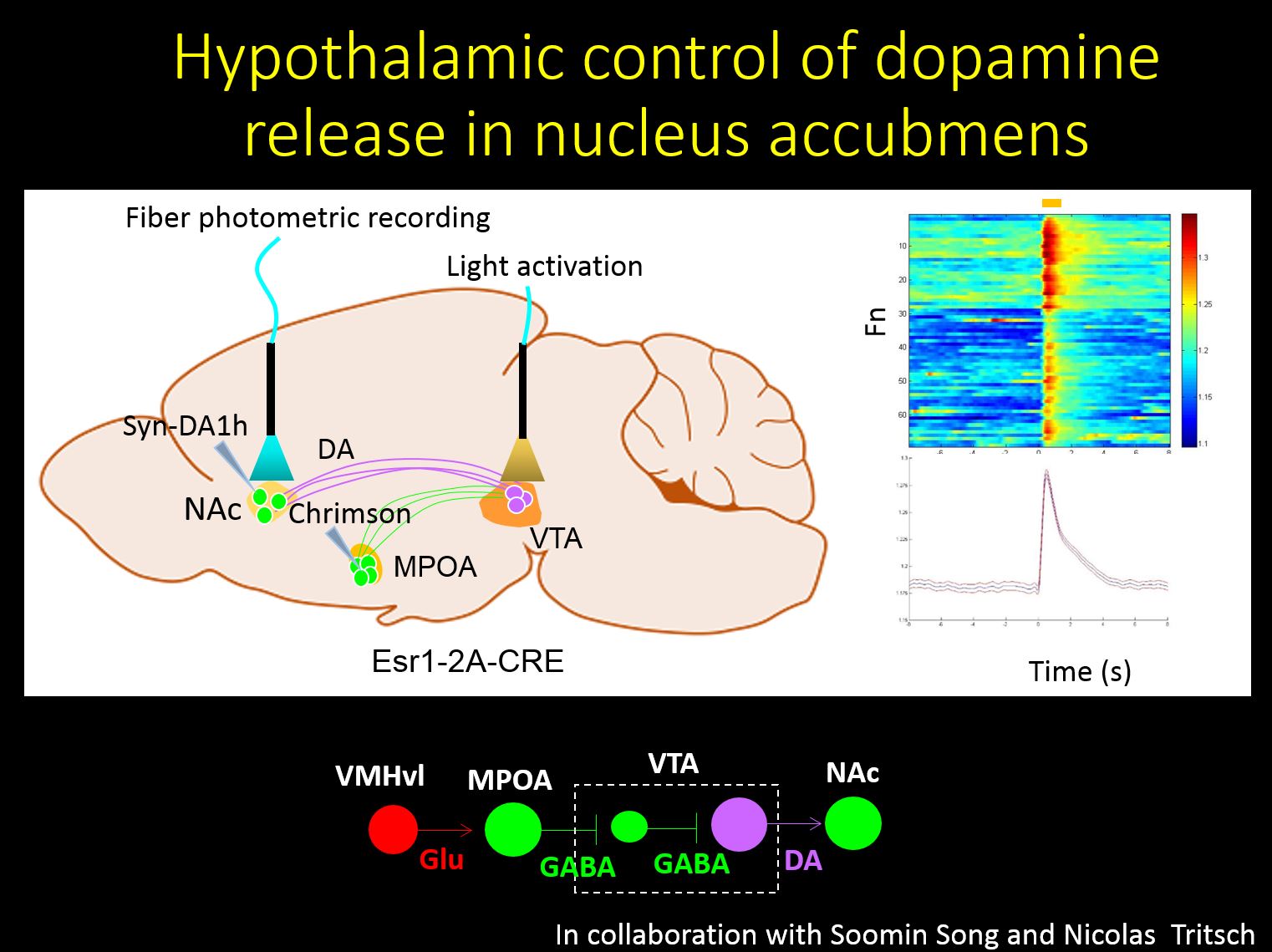 Does your research have any clinical implications?

We hope that by finding and understanding the circuit and especially the nodes that are essential for aggression we will be able to come up with non-invasive approaches to suppress the activity of those regions so that we can suppress exaggerated aggression.

This could help in psychiatric conditions. As for psychiatrists, violence is one of the most difficult things to manage. The current methods to control violence are very limited in the hospital setting, and usually involve sedating patients. If there are ways to suppress the urge to aggress, without compromising the cognitive and other social functions, then I think that would be very beneficial.

Dayu Lin received her Ph.D. degree from Department of neurobiology at Duke University in 2005, mentored by Dr. Lawrence C. Katz. She then continued her postdoctoral training at Caltech with Dr. David J. Anderson. In November 2010, she started her independent research group at NYU Langone medical center studying the neural mechanisms of social behaviors.