With an aging population and no effective treatments, there is a real urgency to better understand Alzheimer’s disease. In the following interview, Dr Marc Aurel Busche outlines how his research on altered neuronal circuit function in Alzheimer’s models could have important implications for clinical trials in patients.

How much is currently known about the neuropathology of Alzheimer’s disease?

The pathology of Alzheimer’s disease is actually very well understood. We’ve known for over a hundred years, from the work of Alois Alzheimer and many others, that patients with Alzheimer's disease have a build-up of amyloid plaques, which are composed of aggregated amyloid-β proteins, in the extracellular space of the brain.

Inside neurons there is a build-up of neurofibrillary tangles, which consist of misfolded and aggregated tau proteins. Together these two pathological lesions are associated with synapse loss, nerve cell degeneration and gross brain atrophy. 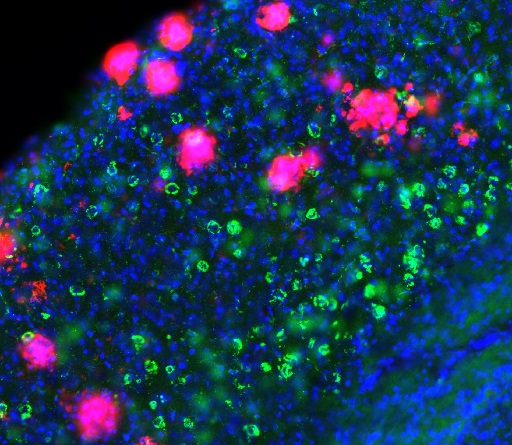 What have been the main advances in our knowledge in recent years?

In the last couple of years, we have really appreciated that the pathology starts to build-up much earlier than we previously thought. It was shown, for example, that ten to twenty years before people actually have first symptoms, they start to have plaques and tangles in the brain. This early stage is called the pre-symptomatic stage of Alzheimer’s disease.

What gaps in our knowledge still remain?

Tau and amyloid-β are physiological proteins, which means that every one of us produces both throughout the day. If I were to measure your blood right now, I could detect both tau and amyloid-β.

What we still don’t understand is why at some point, mostly in older people, these proteins start to aggregate and form plaques and tangles. If we understood this, we could block the process therapeutically and hopefully eliminate the disease.

Is it possible to test for the pre-symptomatic stage of Alzheimer’s disease?

Classically the pathologist would look at the brain post-mortem and see the pathology. However using positron emission tomography (PET) imaging in combination with markers that bind very specifically to the plaques and also to tangles, we now can visualise the pathology in healthy people in the pre-symptomatic stage of the disease.

However, right now we don't do that routinely in the clinic. One problem is that even if we detect the plaques and tangles, we don’t know at what age this person will develop symptoms. Furthermore, we know that some people who have a lot of pathology in their brains actually never develop any symptoms during their lives.

Another caveat is that even if we did know when the person would develop dementia, right now we wouldn’t be able to prevent it as we don’t have any treatments that delay the onset of the disease. But in principle, yes, you could get a scan today and test if there are plaques or tangles in your brain which may increase your risk for Alzheimer’s disease.

Another problem is that PET imaging takes a long time, is very expensive and is not widely available. Because Alzheimer´s disease is a global problem, we need more affordable and widely accessible diagnostic tests such as blood tests or more sensitive cognitive tests. There are some promising early findings, but we are not there yet and this will take time.

Why has it been difficult to establish the mechanisms by which both amyloid-ß plaques and tau containing neurofibrillary tangles drive the disease?

There have been several challenges with establishing the pathophysiological mechanisms of Alzheimer’s disease. For a long time it was difficult to study intact brain circuits in vivo, and we relied mainly on in vitro techniques such as brain slices or cell cultures.

The development of in vivo techniques, such as two-photon calcium imaging, really helped us to understand more about how Alzheimer’s pathology impacts brain functions and has revealed some very surprising findings that were not predicted by, and even contrary to, prior in vitro work.

Another challenge is that we don’t yet understand how the healthy brain works, how all the different cell types in the brains function and interact with each other. Putting all these pieces together, and understanding what goes awry in disease, is very difficult, but I think we are making good progress.

How do the symptoms in mice models differ from patients with Alzheimer’s disease and what problems does this cause?

The typical models for Alzheimer’s disease carry mutated amyloid precursor protein genes, which are related to familial forms of the disease. These mice overproduce amyloid-β peptides and develop amyloid plaques that are similar to human plaques. They also develop cognitive impairments.

One problem is that while several anti-amyloid treatments were largely curative in these mice, the same treatments failed in clinical trials involving tens of thousands of patients. This shows that there are major differences between mice and Alzheimer patients. The mice don’t have tangles, no neurodegeneration and no atrophy, and this could make all the difference.

What techniques do you use to try to elucidate the mechanisms underlying memory problems in Alzheimer’s disease?

We are interested to find out why neurons become dysfunctional in Alzheimer´s disease. And to investigate this question we use in vivo two-photon calcium imaging in combination with electrophysiology. These techniques allow us to study with very high spatial and temporal resolution the impairments of neural circuits associated with the disease. We hope to identify novel treatment targets perhaps even beyond amyloid and tau.

Can you please outline your finding that impairments in neuronal circuit physiology caused by Alzheimer neuropathology can only be reversed under certain conditions?

We found that, as expected, the build-up of amyloid plaques in the brain causes changes in neural circuit function. However, instead of the expected silencing we noticed that many neurons near plaques are abnormally hyperactive, firing much more than normal. We could link these hyperactive neurons directly to perturbations of large brain networks and cognitive problems.

We also discovered that it is not the plaque itself that causes hyperactivity, but rather the soluble amyloid peptides that surround the plaques. Now, our expectation was that reducing soluble amyloid would reverse the neuronal dysfunctions. However it was more complicated than this. In fact, we found that antibodies against amyloid plaques actually worsened the hyperactivity.

On the other hand, we showed that blocking the production of soluble amyloid peptides could repair dysfunctional circuits and improve cognitive functions. Our current investigations try to better understand why different amyloid lowering approaches have dramatically opposite effects on neuronal function.

What implications does this have for clinical trials in patients?

Showing that anti-amyloid antibodies worsen brain dysfunction instead of repairing it could explain why similar antibodies were not effective in recent clinical trials. Thus, our research directly helps “failure analysis” of the numerous failed amyloid based trials, and may accelerate the design of new outcome measures.

It is very clear from our work, and that of many other labs, that Alzheimer patients have neural circuit hyperactivity and in many cases even overt seizures. Clinical trials now directly test the hypothesis that dampening neuronal activity, for example with antiepileptic drugs, can ameliorate symptoms in patients with Alzheimer’s disease, perhaps even delay disease progression. There are several other novel clinical approaches targeting neuronal hyperactivity in early Alzheimer’s disease and I am very excited about this.

What are the next steps for your research?

We want to clarify what happens to neurons and their circuits in the earliest stages of Alzheimer’s disease, and understand the relevance of these changes for disease progression and symptoms. Of course we want to study how new genetic observations about other cell types such as microglia fit into classical pathophysiological mechanisms.

As a psychiatrist I am also very excited about translating some of our newest findings into the clinic. All this will happen in my new lab at the UK Dementia Research Institute at University College of London where I will move at the end of summer.

Will you be exploring why certain people with lots of amyloid plaques don’t develop symptoms?

Yes, and I believe that our circuits approach will be extremely helpful to better understand this because circuits are closer to symptoms than pathology. It is possible that in these people cells and their circuits are less impaired and it will be important to find out why.

Another interesting aspect is that there is evidence that the activity within circuits can actually accelerate the pathology. For example, we know that amyloid peptides are secreted from neurons in an activity-dependent manner that means when there is increased firing of neurons, there’s more amyloid-β secretion. And of course the most important question is: can we use this knowledge therapeutically and change the disease progression by modulating brain activity? 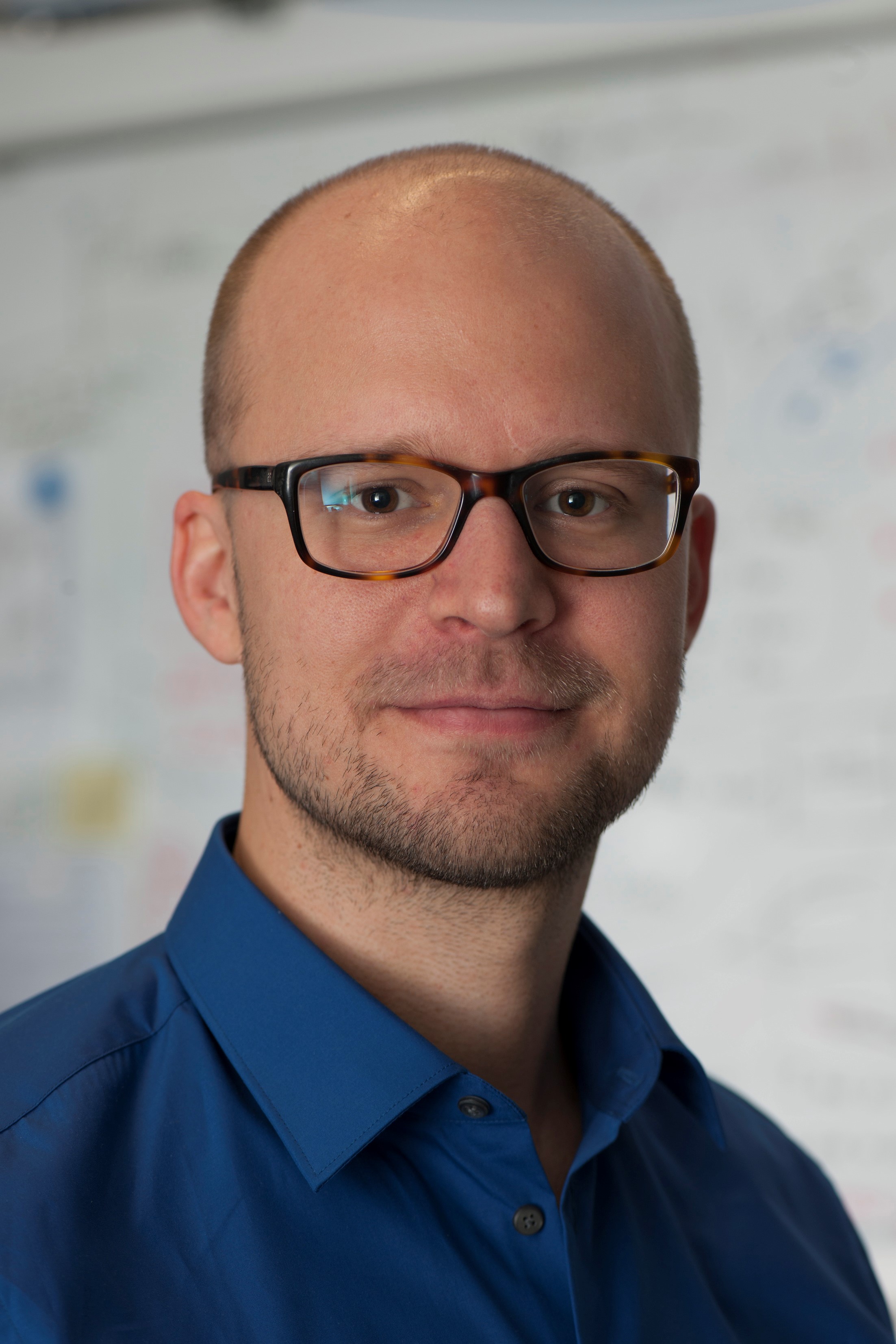 Marc Aurel BuscheI received my MD from the Ludwig-Maximilians University of Munich (2009), and then earned my PhD at the Technical University of Munich, where I remained to pursue residency training in psychiatry. I did my postdoctoral training at the Institute of Neuroscience with Arthur Konnerth, and then became an Associate Investigator at the Munich Cluster for Systems Neurology. Currently, I am an EMBO Fellow working with Bradley T. Hyman at Massachusetts General Hospital and Harvard Medical School. End of this summer I will establish my new lab at the University College of London as part of the UK Dementia Research Institute.

My research interest focuses on exploring the cellular and circuit impairments underlying memory disorders, with an emphasis on Alzheimer’s disease (AD). Using a combination of in vivo two-photon calcium imaging, electrophysiology, cell biological approaches and behavioural testing in animal models, my work has revealed that Alzheimer´s neuropathology is associated with an impaired excitatory/inhibitory balance, resulting in increased fractions of abnormally hyperactive and silent neurons, impaired sleep-related slow-wave oscillations and epileptiform activity. My research explores novel ways of correcting those Alzheimer-related circuit dysfunctions.