Searching for the engram

Searching for the engram

Professor Sheena Josselyn recently gave a seminar at the Sainsbury Wellcome Centre on making, breaking and linking memories. In the following interview she outlines the search for the “engram” – the physical or functional representation of a memory – and neuronal competition during memory formation.

Can you please give a brief history of Karl Lashley’s “search for the engram” in the 1950’s?

Karl Lashley was an inspirational scientist who studied how to localize a memory in the brain for over 30 years. He used multiple approaches, but his favourite was training rats in a maze. He would teach the rats something and then try to find where the representation of this memory was in the brain.

Lashley spent many years doing this, and he mostly used thermal cautery, a very modern technique at the time, which allowed him to perform localized lesions of the cortex and see which lesion would wipe out the memory.

However, no matter what kind of small, localized lesions Lashley performed in the cortex, he couldn’t find the one place where memory was stored. Huge big lesions of the cortex showed a small effect, but it didn’t seem to matter where it was. And so, after about 30 years of experimental work, he ended up concluding that the engram is everywhere in the brain, but nowhere specifically. 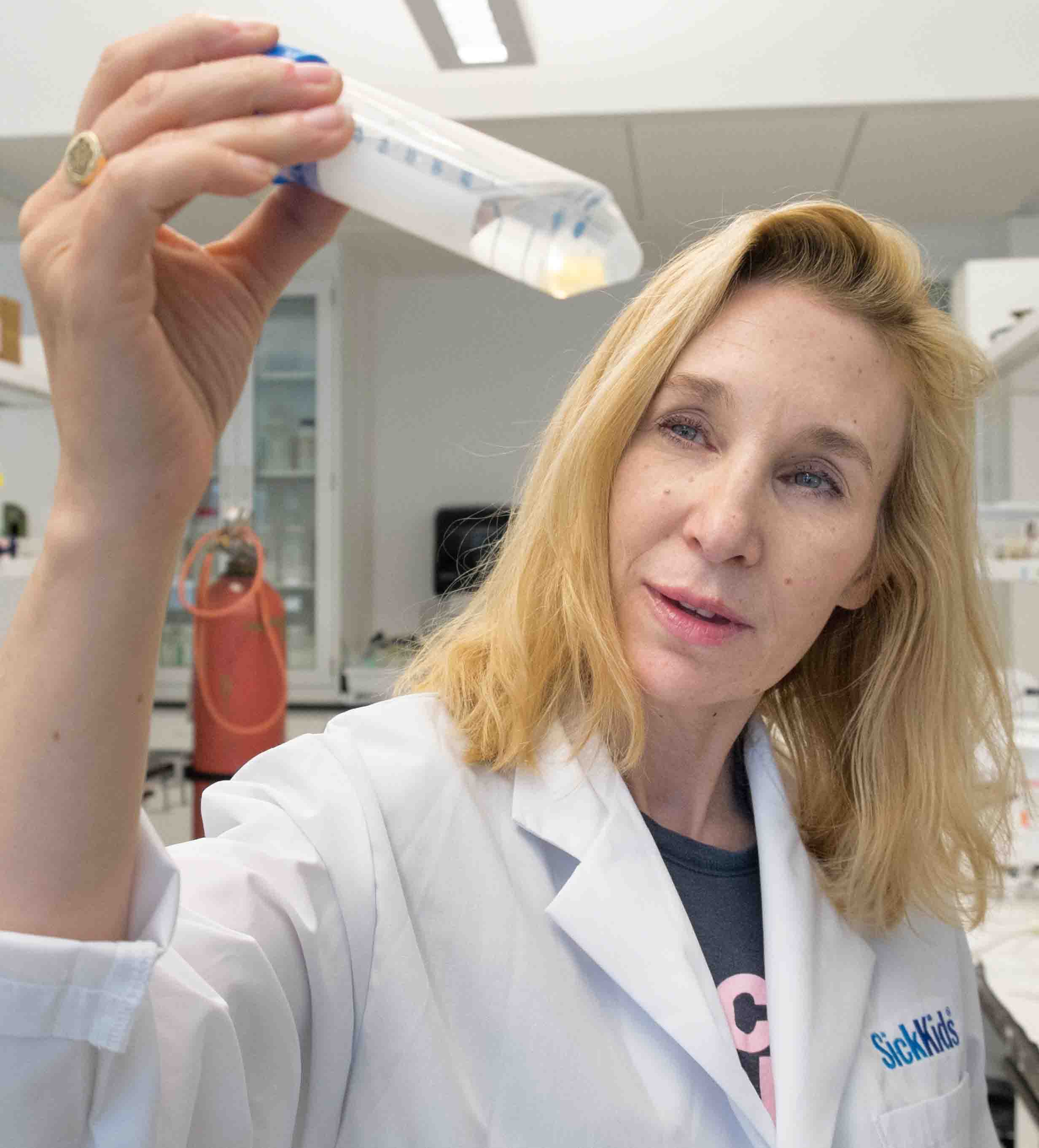 Why has it been so difficult to identify the precise neurons which make up a memory trace?

I think Lashley’s approach was right, he was just limited by the tools of the time. Now, we have the ability to be much more targeted, so we can look at the cells important in memory that are active during the training session.

From this modern Lashley experiment we were able to find where the engram is, or at least a key component of the engram. We found cells that are certainly necessary for memory retrieval.

Do we now understand why one neuron, rather than its neighbour, is involved in a given memory trace?

We understand a lot more than we used to and we know that in the area that I study, the lateral nucleus of the amygdala, most excitatory big neurons have the potential to participate in a memory, but those cells that are more active, or more excitable, right before the training event, seem to be more likely to be involved.

That’s one important distinction between them and we can manipulate it, so we can play off excitability, and activity, and bias whether a cell participates in an engram or not. But maybe that’s not the whole story as right now, we don’t know how this happens naturally.

So far our research has involved a lot of manipulation, for example, we can increase, or decrease more than physiologically normal cell activity. But endogenously, how does this process work? We’re still at the beginning stages of figuring this out.

Can you please explain how eligible neurons in the lateral amygdala (LA) compete for inclusion in a memory trace? Why do you call it a competition and what determines the winner?

We think that neurons compete for inclusion in a memory trace, and those that are more excitable or active at the time of training win this competition. Interestingly, we think that there’s a cap on the number of neurons that can win. So, if we increase excitability of all these neurons, there’s no clear winner relative to the others; in other words, we wipe out the competition and memory is impaired.

For there to be a good memory, you need this competition and only a limited group seem to be able to win. In addition, once they win, the winners seem to inhibit their neighbours, the loser cells. This inhibition is probably carried out through a variety of mechanisms. We looked at inhibitory PV-positive neurons in our studies, but there are probably other things going on.

We call it a competition because there are only a certain number of neurons that can win, so it is first past the post, rather than any neuron with a certain level gets to win. Interestingly, the strength of the memory doesn’t seem to be coded by the size of the engram population. This means that the size of the engram doesn’t change for mice trained on a very strong memory or a very weak memory, which again suggests that there is a constraint on the number of neurons that can be in an engram.

Furthermore, when we disrupt this constraint, then the memory is not as specific, it becomes generalized and we think that that is disrupting faithful memory recall. 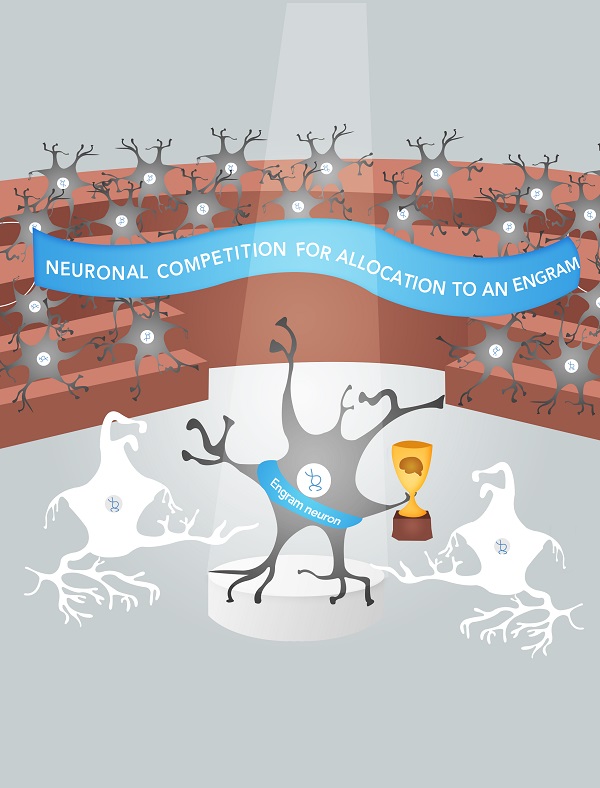 What clinical implications could this work have?

I think it is always really important to understand the real fundamental basics of memory because there are so many disorders where memory goes wrong. You could certainly argue that this work has implications for autism, as although the problem with autism might be an information processing disorder and may not be memory per se, it may have implications for how people with ASD process the information in general.

For frank memory disorders such as Alzheimer’s disease, we need to understand how memories are formed, how they’re recalled and what happens when we can’t recall them, if we ever hope to have any good treatments. Right now, we’re trying our best, but because we don’t understand the fundamentals, there’s no better way to go about these things.

Do you think competition between neurons could explain other brain functions?

We haven’t studied that, but I imagine competition is probably used for other things. In many areas, the brain uses sparse coding, so not every neuron is engaged, and representation are probably distributed across different brain regions.

What further work is needed to increase our understanding of competition between neurons in the adult brain? Are there new techniques that would help to advance these concepts?

I think that the competition between neurons in the adult brain is an understudied question. In our studies we manipulate function and activity of these cells but in a way that is not physiological. I think the real trick is to do some recording, or imaging, to observe what is happening naturally and further work should focus not just on manipulating but observing what happens normally.

Sheena Josselyn is a Senior Scientist in the Neurosciences & Mental Health program at The Hospital for Sick Children (SickKids) and a Professor in the departments of Psychology and Physiology and the Institute of Medical Sciences at the University of Toronto in Canada.  She holds a Canada Research Chair in Molecular and Cellular Cognition and is an EJLB Scholar.  Her undergraduate degrees and a Masters degree in Clinical Psychology were granted by Queen’s University in Kingston (Canada).  Her mentor was Dr. Richard Beninger. Sheena received a PhD in Neuroscience/Psychology from the University of Toronto with Dr. Franco Vaccarino as her supervisor.  She conducted post-doctoral work with Dr. Mike Davis (Yale University) and Dr. Alcino Silva (UCLA).

Her program of research is dedicated to understanding the neural basis of cognitive function and dysfunction. To unravel the molecular, cellular and circuit processes that underlie memory, her lab uses a multidisciplinary approach that focuses on mice and attempts to translate these basic findings into humans.