An interview with Dr Yang Dan, Paul Licht Distinguished Professor in the Department of Molecular and Cell Biology and an investigator of the Howard Hughes Medical Institute at the University of California, Berkeley, conducted by April Cashin-Garbutt, MA (Cantab)

The question of why we sleep has puzzled people for many years. In the process of studying how we sleep and what controls sleep, Professor Yang Dan is beginning to shed light on what function sleep really serves. In the following interview Professor Dan outlines her search for sleep neurons.

How do you define sleep neurons and why are they difficult to identify?

Sleep neurons are difficult to find as they tend to be spatially intermingled with other neurons. If you activate all the neurons in a certain region, you tend to activate a mixture of populations. Very often the animals wake up because the other neurons you have activated could be important for awake behaviour, so overall you see an increase in wakefulness, not necessarily sleep.

Once you know how to single neurons out, by putting your optic fibre in the right place and expressing channelrhodopsin in the right cell type for example, then it is not that difficult to identify sleep neurons. 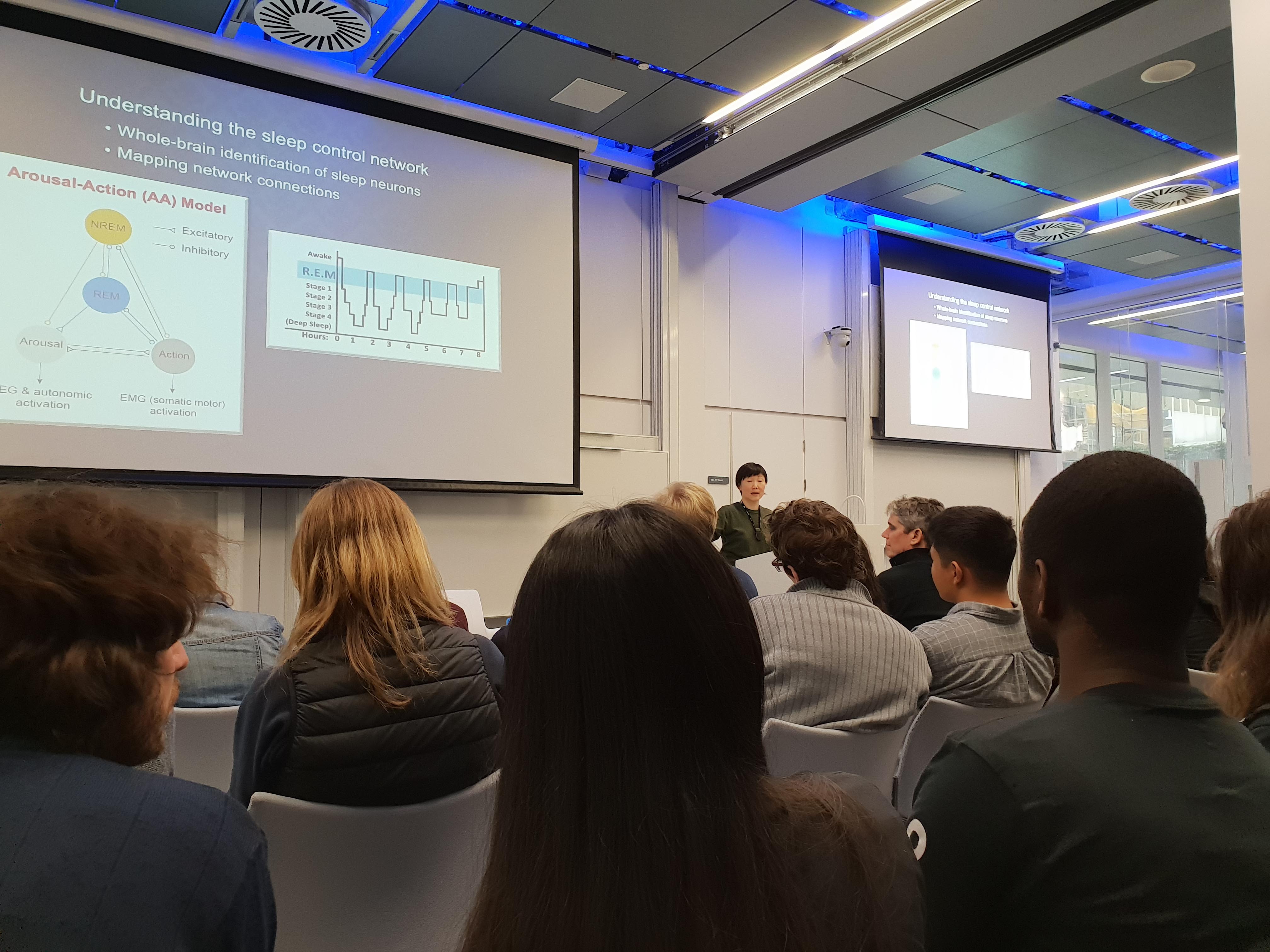 What techniques do you use to identify sleep neurons?

Sometimes we use anatomy. It has been known for a long time that sleep neurons often inhibit wake neurons, so we can start with the wake neuron and trace back and see whether there are neurons inhibiting those, which could be candidate sleep neurons.

In recent years, we’ve also been doing a lot of sequencing to see if we can find more permanent molecular markers for sleep neurons. Because of the power of mouse genetics, once you find the right marker, then it’s easy to use a Cre mouse line, or some molecular tools, to target those neurons.

In which regions of the brain do sleep neurons reside?

For a long time people thought that there may be a single sleep centre in the anterior part of the hypothalamus. In the sleep field, people call it the preoptic area (POA), it’s close to the optic chiasm, and that’s where this name came from.

However in recent years, we, and several other labs, have found sleep neurons outside of the POA, so it seems like it is a distributed network.

We’re still in the process of finding more sleep neurons and then eventually we should have a better idea of what the entire network looks like.

So far sleep neurons have been found in many different places including the forebrain, midbrain and hindbrain. We certainly haven’t found all of them yet.

How are sleep neurons thought to coordinate within or between regions?

We don’t know because we don’t even know where they all are yet. Even the sleep neurons that we have found already are scattered and project to multiple places.

The feeling is that the sleep neurons could all be connected to each other. In some sense, they have to be because eventually everything is connected together in the brain. 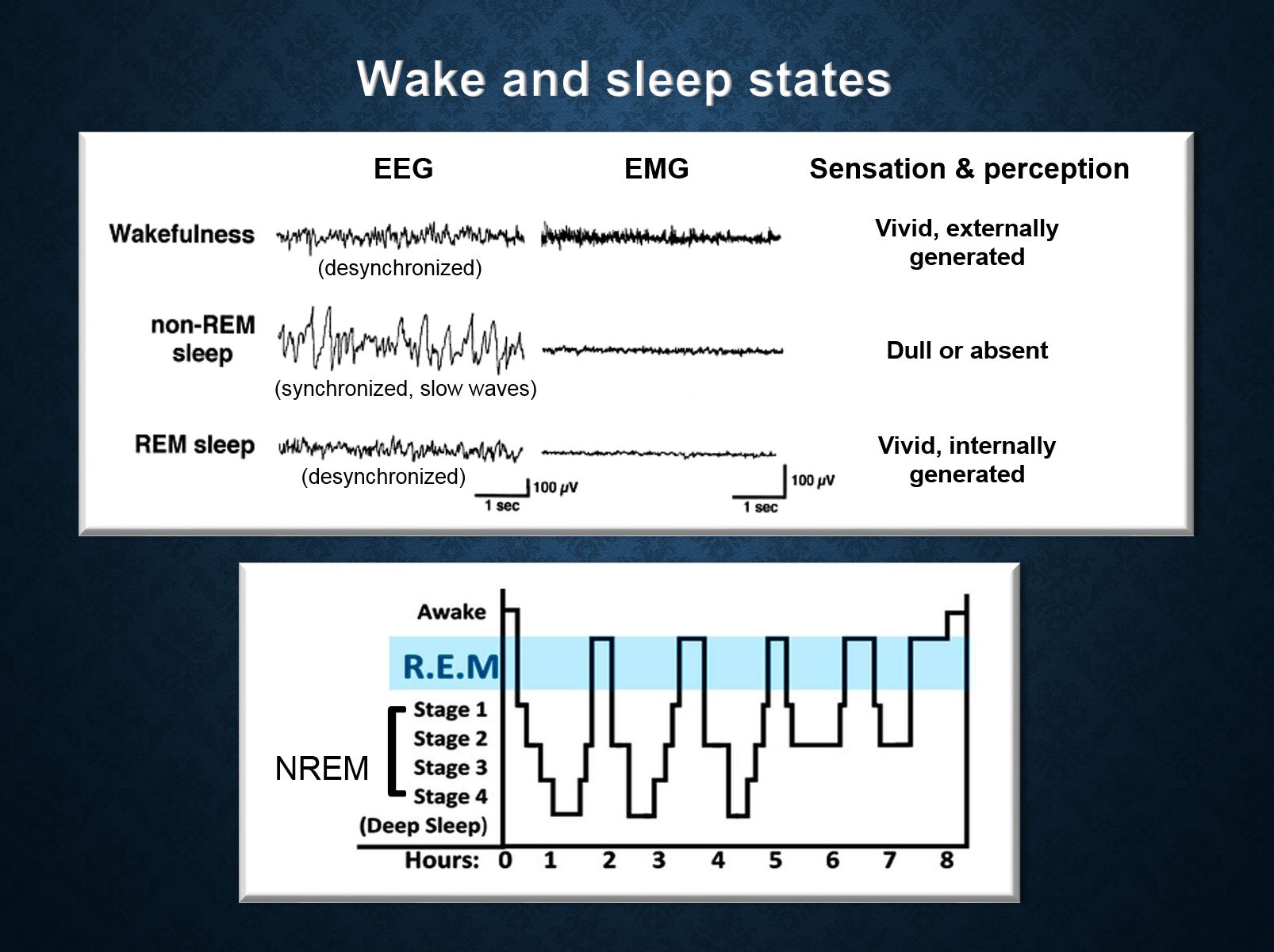 Do neurons in distinct regions participate in different aspects of sleep?

We know that in mammals there are two types of sleep, REM and non-REM, and there are very different neurons regulating them.

A lot of REM neurons are found in the hindbrain in the pons and the medulla, but people have also found some of them in the hypothalamus as well.

Initially people thought the non-REM neurons were in the forebrain, in the anterior hypothalamus, but now we find them in the hindbrain as well.

So if you’re talking about different types of sleep, there are definitely different populations of neurons. However, even the non-REM neurons could still be mediating different aspects of sleep.

Interestingly, we found quite a few neurons associated with the autonomic nervous system, i.e. the system regulating your heart rate, blood pressure, body temperature and so forth. It could be that some of the non-REM neurons promote non-REM sleep, but also regulate the heart rate per se. Others are more involved in body temperature and brain state.

It turns out that all of those functions, heart rate etc., change when we go to sleep, so somehow the sleep circuit has to coordinate these different aspects of changes associated with sleep.

Does your research suggest a new model for sleep control? How does this model differ from previous hypotheses?

We recently came up with a motor theory of sleep, which states that sleep regulation is fundamentally about movement regulation.

There are two motor systems. Firstly, skeletal muscle movement, which in mammals is controlled by the somatic motor system, spinal cord, motor cortex, basal ganglia and so forth. Then there is another motor system that’s very important for controlling heart rate, blood pressure and other autonomic processes.

We all know that when we sleep we don’t move much, this is controlled by the somatic motor system. But during sleep, there is also autonomic regulation.

It is crucial that the action system is inhibited during REM sleep, otherwise we act out our dreams.

What happens in the brain when sleepwalking occurs?

If you lose action control during REM sleep, REM behaviour disorder occurs, which is where a person acts out their dreams. Surprisingly, this is not how sleepwalking occurs. Instead, sleepwalking is thought to be associated with non-REM sleep.

Normally, the somatic motor system should be shut down during non-REM sleep, but if somehow it is not then sleepwalking occurs.

Why do we sleep?

By studying what controls sleep, we have started to get an idea of why we sleep. My hypothesis is that sleep is about reducing movement.

If the motor theory of sleep is correct and sleep is about reducing movement, then it suggests that sleep is to facilitate something that’s not compatible with motor activity. I think this could be related to growth and repair.

Intuitively we know that children need more sleep as it is important for their growth. As adults, we don’t grow as much, but we do need to repair and rejuvenate our bodies. 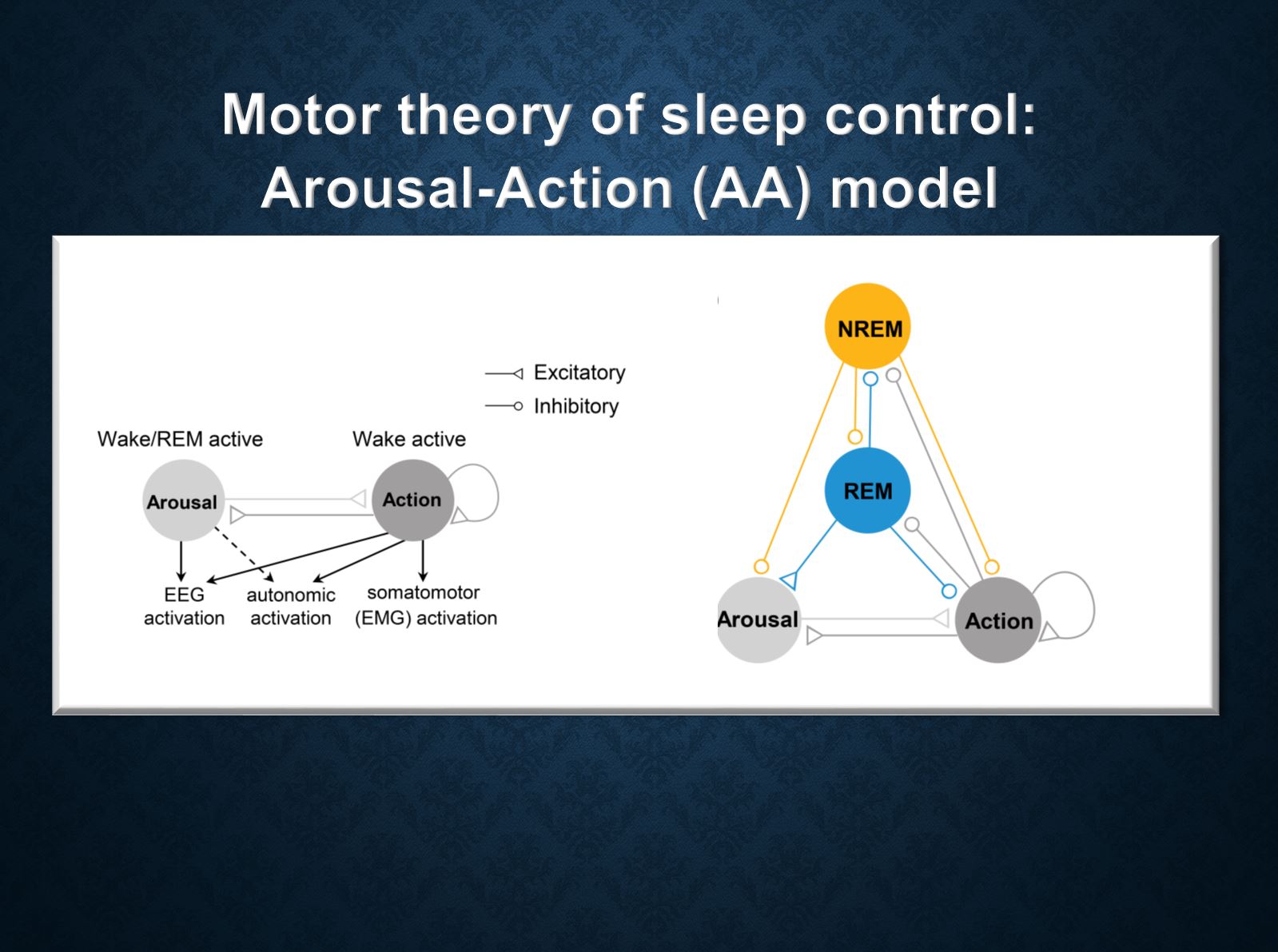 Does your research have any clinical implications?

Not yet, but we are moving in that direction. We are hoping that once we find a lot of these sleep neurons, we can do more sequencing to find potentially druggable targets that are enriched in these neurons.

If we find targets that are specific to the sleep neurons that are easily druggable, like GPCRs or kinases, then you can start screening for potential drugs.

I’m also getting excited about non-invasive stimulation techniques. You can stimulate through the skull, but of course, one challenge is the need to be cell type specific. Humans have much bigger brains than mice, so there may be more spatial segregation between the sleep neurons and other neurons, so I think this is worth looking into.

One of the main things I want to focus on is the function of sleep and I have this idea that it has something to do with some metabolic processes. However, I am still trying to figure out what experiments to do.

The other area is application, such as through transcranial stimulation and I’m hoping to do some collaborations to explore this further.

Finally, we all know that sleep is regulated by the circadian rhythm, and also homeostasis. We are going to start looking into these two processes further. In particular, sleep homeostasis is a question that’s thought to be closely related to sleep function. If sleep is important for certain functions, then how does the brain know we need sleep? 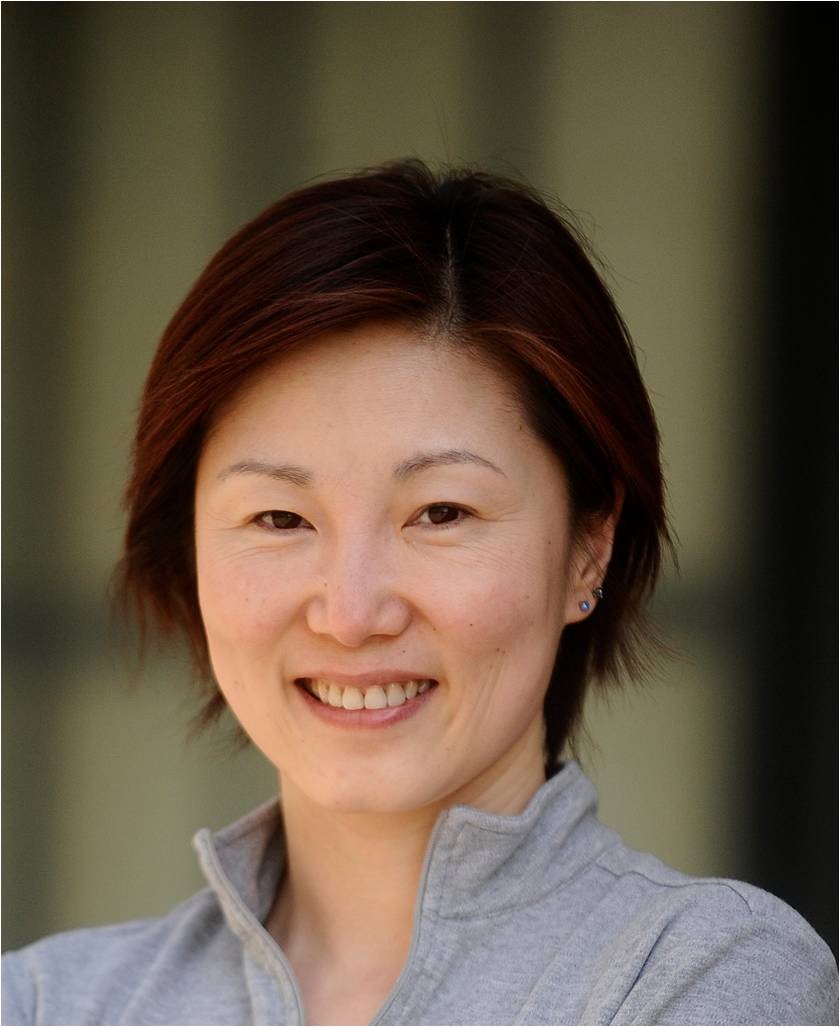 Yang Dan is Paul Licht Distinguished Professor in the Department of Molecular and Cell Biology and an investigator of the Howard Hughes Medical Institute at the University of California, Berkeley. She studied physics as an undergraduate student at Peking University and received her Ph.D. training in Biological Sciences at Columbia University, where she worked on cellular mechanisms of neurotransmitter secretion and synaptic plasticity. She did her postdoctoral research on information coding in the visual system at Rockefeller University and Harvard Medical School. Dan has received Alfred P. Sloan Research Fellowship, Beckman Young Investigator Award, Society for Neuroscience Research Awards for Innovation in Neuroscience, and is a member of the National Academy of Sciences.