Dr. Cornelius Gross, Deputy Head of Unit and Senior Scientist at EMBL, recently gave a seminar at SWC on how animals produce and control fear behaviours. I caught up with him to learn more about his research on instinctive behaviours.

How do you define instinctive behaviour?

People often use the terms “instinctive” or “innate” to describe behaviours that are not learned, i.e. behaviours you already know how to do for the first time. Instinctive behaviours are important for promoting the survival of your genes and thereby your species.

What role is the hypothalamus thought to play in the expression of instinctive behaviours?

The hypothalamus is an ancient part of the brain whereas other areas, such as the cortex and forebrain, are very recent evolutionary additions. As such, the hypothalamus is able to respond to sensory inputs, form internal states and induce motor outputs.

According to the evolutionary neurobiologist Detlev Arendt, the hypothalamus was formed by the fusion of two ancient neural nets:

The hypothalamus is sometimes mistakenly called the “reptilian” brain; in reality it dates back to before the appearance of the first bilaterian organisms and is perhaps better termed the Ur-brain. A lot of current work focuses on trying to understand how the hypothalamus encodes internal motivational states that drive instinctive behaviour, and although its basic architecture was clarified already 30 years ago, how it controls behaviour it still pretty much a mystery. 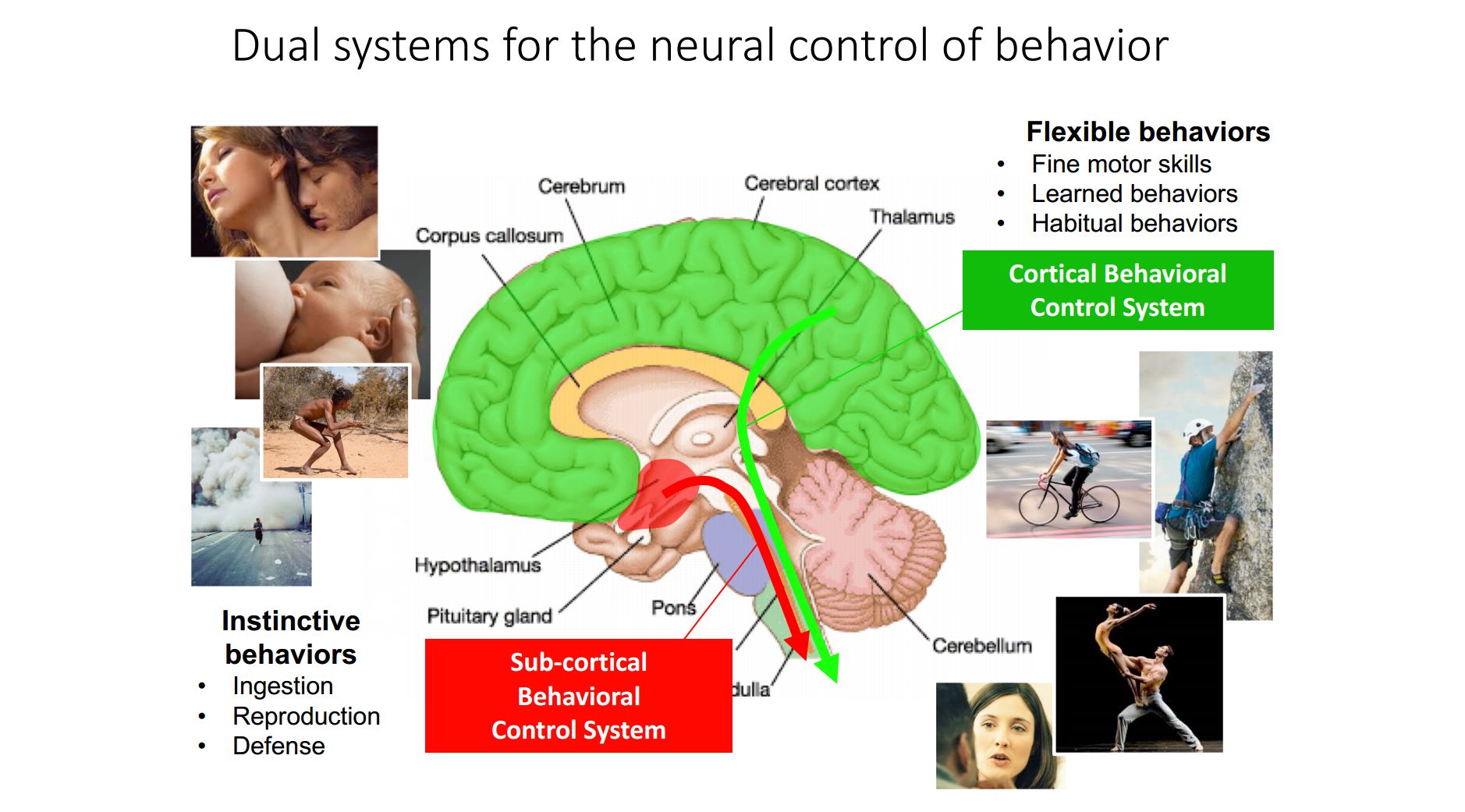 Why does emotion often accompany instinctive urges in humans?

The question of emotion is a prickly issue. Strictly speaking, only humans have emotions as, by definition, they have to be conscious and reportable in some way. However, we know that areas of the brain that control behaviours associated with emotions like fear and sexual desire in humans are highly conserved across many species and so the presumption is that animals also have emotion-like states, which we call internal states or motivational states.

You might ask why we don’t just respond to threatening stimuli by running away without feeling the emotion of fear. This strategy might be effective for an animal that repeatedly encounters the same threat and has a standard, fixed response pattern. This happens in humans for example when we trip and our hands automatically rise to protect our face. However, emotional behaviours are typically elicited by living, autonomous stimuli that are unpredictable.

To survive animals need to integrate information about a threat to guide the activation of a repertoire of predetermined instinctive behaviours, both to select the most appropriate response and to keep the predator guessing about its intentions. One can argue that such an integration-selection task is better served by the activation of an internal state that encodes threat intensity and that empowers a variety of behavioural responses. It is not clear, however, whether internal states are really the best way to drive instinctive behaviour, or whether this brain architecture is just an evolutionary relic that was useful to our ancestors. 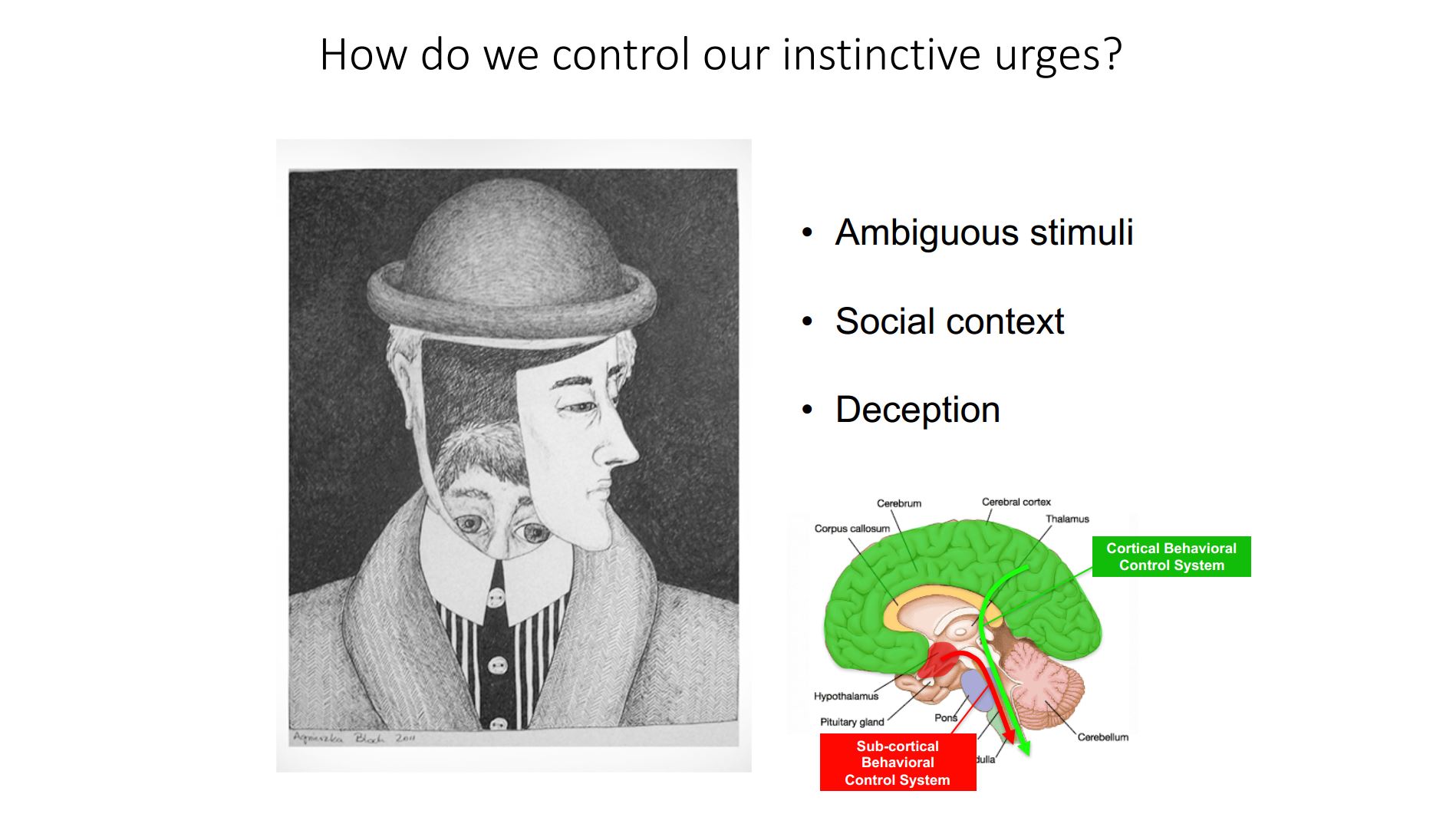 How much is currently known about the brain regions that support instinctive responses?

The basic architecture of the system – the brain regions involved and their connections – was worked out in the 1980s and 90s using classic anatomical methods. At the moment we are in a second phase of discovery where we are applying new genetic tools – optogenetics, pharmacogenetics, and neural activity imaging – to identify the individual cell-types involved and see how the microcircuitries in each structure works.

At the completion of this discovery phase will should understand how you go from sensory input to motor output and how information is encoded and transformed at each synapse along the way. With this information we will be able to make computational models that will help us predict the performance of these circuits and will lead us to new hypotheses about how their work that can be tested by further experiments. I was excited to see how the Sainsbury Wellcome Centre is perfectly placed to contribute to this marriage between experimental and computational neural circuit approaches.

A future phase will focus on plasticity and how the circuits can be adapted, and exploring how the process can be targeted by drugs, such as small molecules that can selectively block regions or cell types or modulate their computational capacity to mitigate behaviours. We are still a long way away from translating this work to humans, but there is great potential in targeting the instinctive behavioural system to treat psychiatric disorders because the suffering associated with these illnesses is overwhelmingly caused by pathological excess or insufficiency in these behaviors. 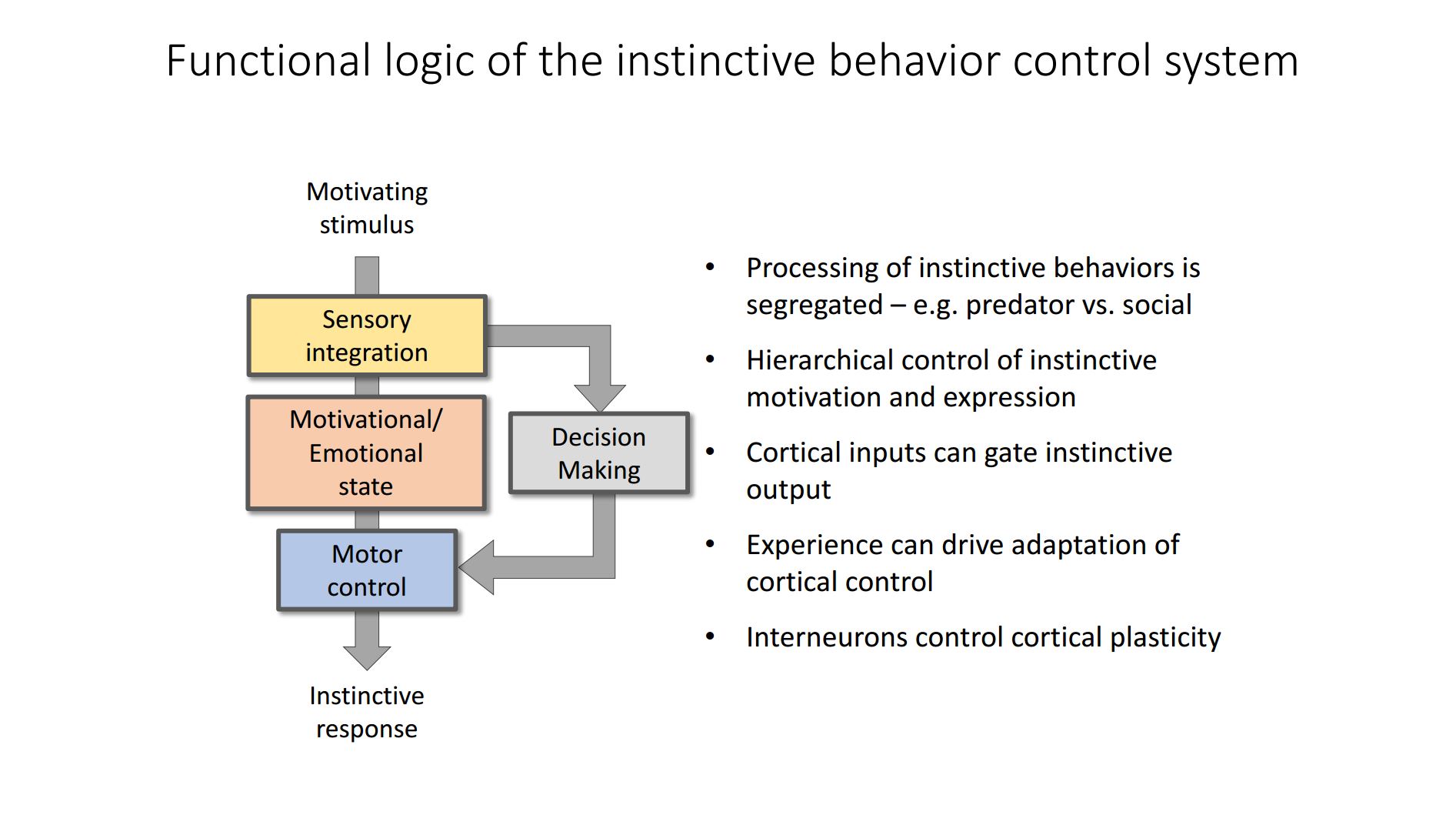 Why are we so far away from translating this research to humans?

For one, if you look at the human literature nobody talks about the hypothalamus and behaviour. The hypothalamus is very small and can’t be readily seen by human brain imaging technologies like functional magnetic resonance imaging (fMRI). Also, much of the anatomical work in the instinctive fear system, for example, has been overlooked because it was carried out by Brazilian neuroscientists who were not particularly bothered to publish in high profile journals. Fortunately, there has recently been a renewed interest in these behaviors and these studies are being newly appreciated.

Yes, we observe that animals dramatically adapt their instinctive responses depending on their environment. For example, animals can become more avoidant of other animals, a form of social fear, if they are bullied by other animals and this avoidance can last for weeks even if the animal is not further bullied.

We have some ideas of how this plasticity works. Cortical structures that record past experiences are able to reach into the brain regions that control the production of instinctive fear behaviour and suppress them. And we have found that these circuits are conserved in primates, so it is very likely that humans use them as well to suppress avoidance behavior.

We also know that the capacity to control instinctive behaviours increases around adolescence when humans begin to interact with peers and presumably need to regulate their instincts so as to balance their immediate needs with those of the group.

How are instinctive behaviours connected to psychiatric disorders?

If you talk to psychiatrists about the things that bother their patients most, they often say it is the negative symptoms such as aggression, fear, and lack of pleasure. Even if we don’t know the origin of the disorder, if we could block the relevant instinctive drive, we could probably help these people. A drug that selectively ramped down aggression, for example, even if it did not improve cognitive symptoms, could be very useful in autism or schizophrenia.

Even if we could target negative behaviour, would people still experience negative feelings?

It would depend on where you intervene between the sensory input and motor output. Of course, this is a big question in humans as we have so much access to our internal states and we don’t really know at what part along the pathway the emotions are getting monitored.

Work in mice and rats suggests that the emotional part is coming from a connection between the medial hypothalamus and cortex that goes via the mid-line thalamus, but in humans this may be different as there may be more connections that we don’t know about. For example, humans could have access to very early sensory information with emotional content, and blocking this could be much more complex than in mice and rats.

What techniques do you currently use in the lab and what are the main research challenges you face?

We use the full range of neural circuit and molecular manipulation and monitoring tools adapted to behaving mice. Many of these are new and truly revolutionary, but we still need more selectively ways to subtly up and down modulate synaptic connections without altering endogenous neural firing activity.

This is because our current tools are still very crude as they globally activate or suppress cells, essentially breaking the circuit. Ideally, you want to leave the circuits intact and tweak their computational properties up or down, increasing or decreasing the gain to see what happens.

Another advance that is desperately needed is the ability to record from thousands or even millions of neurons simultaneously across many brain regions. This will allow us to see brain states encoded in a distributed manner and understand how the brain works as a single organ.

At the same time we need to go down to the sub-cellular level and understand the cell biological mechanisms of circuits. I think we will find that there is a lot of divergence from the standard models about how neurons work. This work will require electron microscopy as synapses lie beyond the resolution of light microscopy, and new tools will be needed like genetically-encoded EM-visible dyes and sensors.

Dr. Cornelius Gross is Group Leader, Senior Scientist, and Deputy Head of the Epigenetics & Neurobiology Unit at the European Molecular Biology Laboratory (EMBL) in Rome since 2003. His research aims to understand the neural circuit mechanisms controlling instinctive behaviors, with a special focus on fear and anxiety.

Dr. Gross was raised in the United States and received undergraduate training in biophysics at the University of California, Berkeley and then pursued doctoral research at Yale University studying transcriptional regulation by homeodomain factors with William McGinnis. Dr. Gross then joined the group of René Hen at Columbia University as a postdoctoral fellow where he discovered a developmental role for serotonin in determining life-long anxiety-related behavior and identified the serotonin receptor responsible for the therapeutic effects of antidepressants.

In his early work at EMBL he showed how deficits in serotonin autoregulation can cause sudden infant death syndrome and how serotonin moderates the impact of maternal care on anxiety traits in adulthood. His laboratory is currently focused on characterizing hypothalamic and brainstem circuits that regulate social and predator fear and understanding the role of microglia in determining the wiring of behavioral circuits during development.

In 2013 he was awarded an Advanced Grant from the European Research Council (ERC) to study social and predator fear circuits in the brain. Earlier in his career Dr. Gross served for two years as a science teacher at a public high school in New York City, where he gained an appreciation of the benefits and challenges of communicating science to a lay audience. He is married with three children and lives in Rome, Italy. 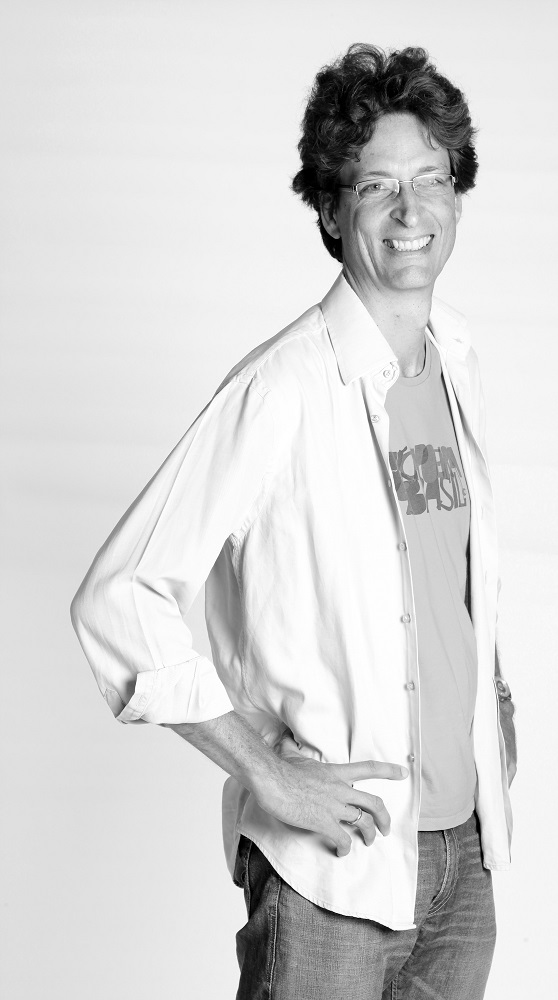