Professor de Waal began by outlining the tumultuous history of emotions, which were an acceptable topic for scientific study 150 years ago, but for the following century were considered taboo by behaviourists such as Skinner who claimed that while emotions did exist, they were irrelevant and had nothing to do with behaviour.

The behaviourists’ main objection was that we would never be able to know what animals feel. However, emotions are not the same as feelings, de Waal clarified. He outlined the outdated theories of Darwin and William James and Carl Lange, before describing the modern view where a stimulus triggers emotion, which then triggers an adaptive action and at the same time may generate feelings. 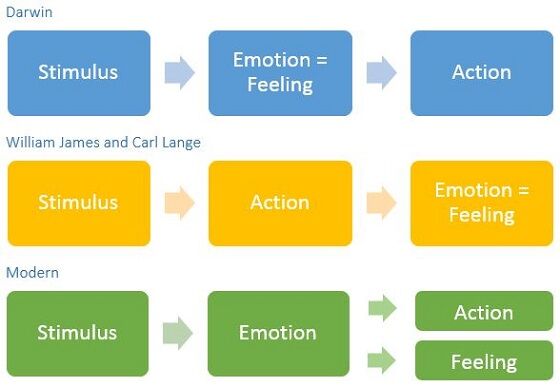 And so feelings are subjective experiences of emotions; whereas emotions are bodily states that we can study and also measure. Thus de Waal argued that there is no problem in studying emotions, so long as you make the distinction between emotions and feelings. It is impossible to know what an elephant is feeling for example, but the elephants emotions are clearly visible and can be studied.

The second objection of the behaviourists that de Waal highlighted was that anthropomorphism, the misattribution of human characteristics to animals, was considered a sin. Professor de Waal showed an example of kissing gourami, a type of fish that appears to kiss another, but is in fact males fighting. However, he also showed several examples of animals that do appear to kiss in a similar way to humans, for example chimpanzees kiss after fighting. 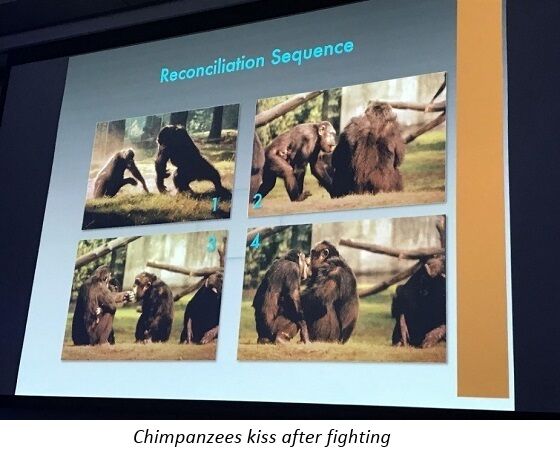 Professor Frans de Waal showed how chimpanzees kiss and make-up after a fight.

There are two different evolutionary processes occurring here: analogies, the products of convergent evolution where similar things arise that are not related to one another, for example the shape of a dolphin and a fish; and homologies, the result of common ancestry, for example the hand of a chimpanzee and a human, which are structurally very similar. 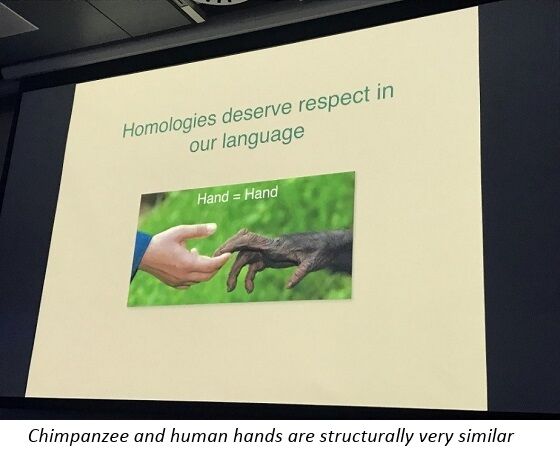 Professor Frans de Waal discussed homologies such as the hands of a human and a chimpanzee.

Professor de Waal proceeded to coin a new term, anthropodenial, which he defined as the opposite of anthropomorphism, in essence an a priori denial that other animals can have human-like mental experiences. Anthropodenial, de Waal claimed, is actually a greater sin (if you are dealing with primates) than anthropomorphism, which can actually help you to understand emotions. 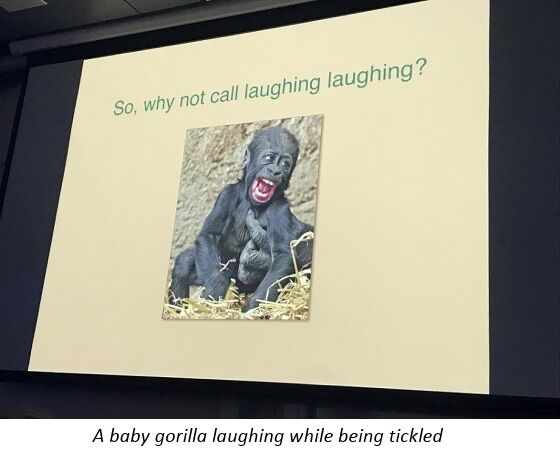 A baby gorilla laughing as it is being tickled.

After describing the way that chimpanzees reconcile after a fight, de Waal explained how this has been observed in many different social animals and that aggression can bring animals together in post-conflict attraction. He even said that it is now puzzling to find social animals that don’t reconcile after a fight, for how can they keep their society together if they don’t have a way of resolving conflicts?

Similar studies have been carried out in children in schools all over the world and interesting cultural differences have been found. For example, American children reconcile much less than Japanese pupils, which is thought to be due to the interference by American teachers, whereas Japanese teachers often allow the children to learn how to resolve conflicts on their own.

Professor de Waal described a study he is currently involved with at Emory hospital where they are observing conflicts between surgeons in operating theatres and how they are resolved.

In the second part of de Waal’s talk he covered empathy, defined as the ability to understand and share the feelings of another. When de Waal first proposed animals have empathy in the 1990’s, he said people laughed for they thought it was impossible as they saw empathy as a human characteristic.

However, Professor de Waal explained how there are two levels of empathy. The first is the body channel, for example, if you talk with a sad person, you will have a sad expression on your face. We have very little control over this body channel of emotion as it is automated and starts very early in life, for example a baby will cry when another baby cries. Interestingly de Waal noted that girl babies do this more than boy babies, so the empathy difference we see in adults is already visible from the first day of life.

The second level of empathy is the cognitive channel, which is more complex and isn’t present in human babies. At this level, a distinction is drawn between yourself and another, and while you appreciate that another’s situation is different to yours, you can take the perspective of the other. This relates to theory of mind.

The body channel, de Waal explained, can be studied through yawn contagion, which, while not an example of empathy necessarily, taps into the same bodily mechanism as empathy. Professor de Waal showed several videos of yawn contagion in animals, including a video of a chimpanzee being shown a screen with a yawning ape, and even a dog yawning after seeing a human yawn!

Professor de Waal’s next focus was consolation, which he showed to be very similar in apes as it is in humans, for example, a juvenile chimpanzee will put its arm around another chimpanzee that has been in a fight.

He described a bonobo sanctuary that rescues traumatised orphan bonobos from the bush meat market and how there is comparable data to the studies that took place in humans in Romanian orphanages, which found that the orphans have problems with emotion regulation and also with empathy.

Consolation has also been found in other species, including voles as shown by James Burkett. This finding encouraged de Waal to study the neuroscience behind this behaviour, so they set up an experiment where the male and female vole were separated and then the female was returned either with or without a stressor. Then the voles were observed when reunited.

In the study, the cortisol levels were measured in both the male and female and they were found to be perfectly correlated. So even though the male had not been moved, he adopted the same stress level physiologically as the female, which is known as emotional contagion. 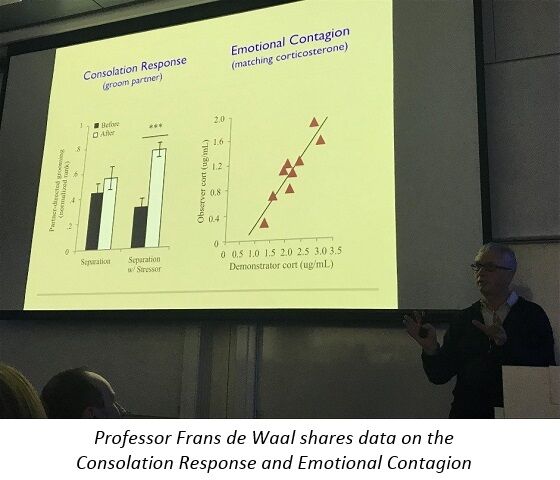 Social bias was also observed in the vole study, where voles were found to only console mates and siblings and not strangers. They also found that oxytocin was involved, as when oxytocin receptors in the brain were blocked, consolation did not occur. Thus it is thought not to be just behaviourally that apes and other mammals are similar to humans in terms of empathy, but neurologically too, i.e. this is a homology.

Professor de Waal also explained how emotional contagion can lead to altruistic behaviour. He described a model where a target is distressed, leading to an observer becoming distressed as a result of emotion transfer. The observer then downregulates its emotions to help the target thereby reducing the target’s distress, which in turn reduces the observer’s distress. Essentially, this is a self-rewarding mechanism that takes the altruism out of altruistic behaviour!

Next de Waal covered the self-other distinction. He first outlined a large number of children studies that have shown the age in which children begin to recognise themselves in a mirror, is the age when they begin to show more complex forms of empathy. He then proceeded to state that the same has been proposed for species, i.e. species that recognise themselves in a mirror, like elephants, have a higher level of empathy for each other. This includes bonobos and also elephants that display targeted helping, thereby demonstrating how they understand the predicament of others and the ability to take their perspective.

Emotional contagion de Waal claimed is present in all the mammals and targeted helping is present in only some, as it requires a self-other distinction that is reflected in the mirror-test. Professor de Waal then showed videos of apes and elephants recognising themselves in the mirror. This is something that your average dog isn’t able to do! 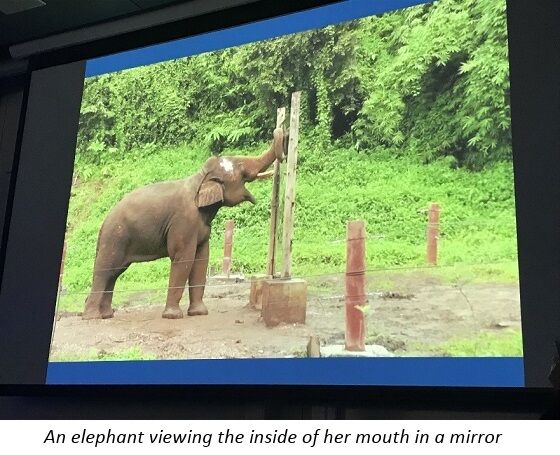 In the next part of his talk, de Waal described the Russian doll model of empathy, which he developed with Stephanie Preston. At the core he sees empathy as having a perception–action mechanism, which is very basic and present in many animals leading to state matching and emotional contagion. On top of that is sympathetic concern and consolation behaviour. At the most complex level is perspective-taking and targeted helping.

Studies have been carried out to determine whether animals care about the wellbeing of others. One particular experiment de Waal described involved two chimpanzees side by side, where one chimpanzee was given the option of two-different coloured tokens. No matter which colour the chimpanzee chose, the decision-maker received a reward; however, the second chimpanzee only received a reward if one colour is chosen over the other, i.e. there is a selfish token, where only one received food, and a pro-social token, where both received food.

In the final part of his talk, de Waal talked about his work on fairness studies that he started with Sarah Brosnan a long time ago. He showed an enlightening video of two capuchin monkeys where the one who got less than the other (cucumber instead of grapes) got very upset.

He compared this to salaries in humans and explained how effort is an important factor. For example, if someone has twice the salary of another for doing the same job with the same experience, that seems unfair; but if one person works much harder, for longer hours and doesn’t take vacation etc. then it seems fairer that they get a higher salary.

Following de Waal’s talk, a number of thought-provoking questions were asked by the audience including the reasons for adult bonobos showing less consolation behaviour than juveniles; gift giving between animals and finally whether de Waal’s findings about self-recognition and empathy in primates should impact policies on experimenting on animals and also animal welfare in the agricultural industry.