Neuroscientists at the Sainsbury Wellcome Centre have identified a circuit in the primary visual cortex (V1) of the brain that integrates head- and visual-motion signals. The study, published today in Neuron, elucidates the mechanisms by which visual and vestibular inputs to the brain sum together to enable appropriate behavioural responses.

As you go about daily life you are constantly moving your head to look around the world. In order to make sense of the information that falls within your gaze you need to keep track of the position of your head; this is accomplished with information that comes from your vestibular sense organs, which are in your inner ears.

The research team identified a site in the primary visual cortex (area V1) where vestibular signals and visual signals converge and went on to determine that the vestibular signals come from the retrosplenial cortex, a brain area thought to encode information critical for spatial navigation through the surrounding world.

“Since the 1950’s we have been focused on understanding how the direction and velocity of sensory stimuli are represented at the level of the primary sensory cortex.  Here we show that this cortical process is context-dependent and involves ‘internal’ signals that report the motion status of the animal.”

To first identify areas within V1 that might have access to head-motion signals, the researchers used state-of-the-art Neuropixels probes to record from the brains of mice that were passively rotated. The initial recordings were carried out in complete darkness to ensure there was no visual input and the data showed that V1 layer 6 (L6) neurons convey information about the motion of the head during rotation.

The second part of the study, using intracellular recordings, focused on which aspects of head motion might be encoded by such activity. By lesioning the vestibular canals and rotating the animals at various speeds, they showed that the vast majority of V1 L6 neurons receive synaptic inputs whose activity provides a reliable estimate of the velocity of the head. 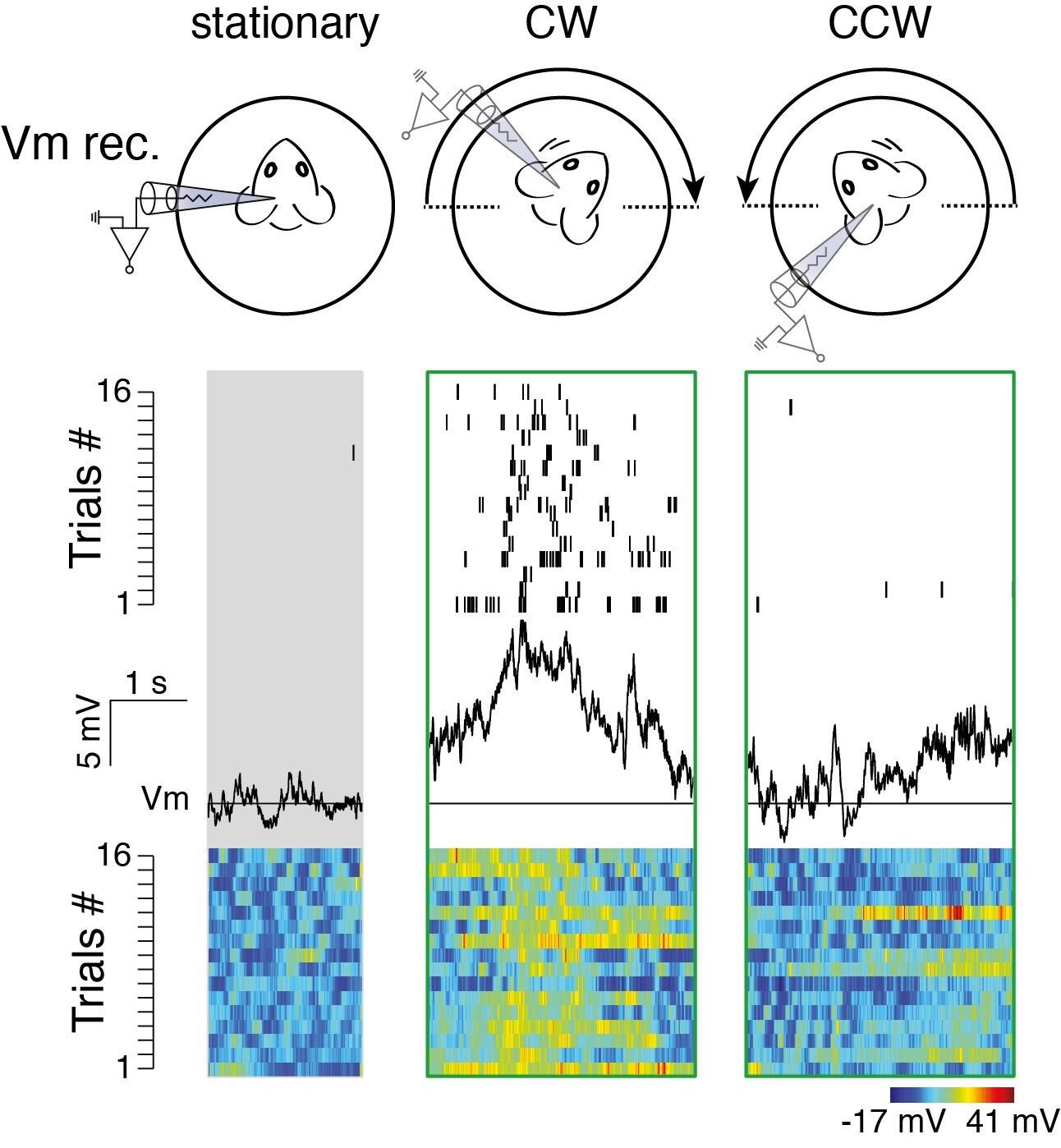 “Perhaps the most surprising observation was the extent to which these signals were being represented across the local network. Despite exploring only a small fraction of vestibular stimulus space, almost all cells were found to respond,” Professor Margrie remarked.

To investigate the integration of head- and visual- motion signals in individual V1 L6 cells, intracellular recordings were again obtained from mice while being rotated past a static visual stimulus and then compared with data from mouse rotations in the dark. It was found that L6 neurons receive set of inputs distinct from those conveying visual motion information and that these signals linearly sum to distinguish internal from external motion and their combination.

The final part of the study focused on a potential source of the head motion signals. The retrosplenial cortex (RSP), an area of the brain involved in spatial navigation, was proposed as a likely candidate due to its monosynaptic connectivity with V1 L6 and its proposed functional relevance. To test this theory, pseudoviruses were used to express a calcium indicator that allowed the optical recording of the output signals of RSP neurons. The data showed that RSP does provide a plausible pathway for the integration of head motion signals.

“Given our previous anatomical findings and its role in spatial processing the RSP was our first candidate region. These new data raise the possibility that various kinds of spatial information might be relayed. In this sense, L6 might serve as a locus for context-dependent modulation of sensory signalling in the cortex.”

This research was supported by The UK Medical Research Council, Wellcome Trust and The Gatsby Charitable Foundation.

Read the full paper in Neuron: ‘A circuit for integration of head- and visual-motion signals in layer 6 of mouse primary visual cortex’ By Mateo Velez-Fort et al.