Neuroscientists identify distinct circuits in the brain that maintain balance

Neuroscientists identify distinct circuits in the brain that maintain balance

A new study published today in Cell Reports describes how a region of the brain called the lateral vestibular nucleus (LVN) is key to maintaining balance and keeping the body on its feet after experiencing a disturbance.

Researchers monitored the muscle activity in the limbs of mice as they walked along a balance beam that was nudged at specific intervals and identified a predictable pattern that enabled the mice to regain their balance. 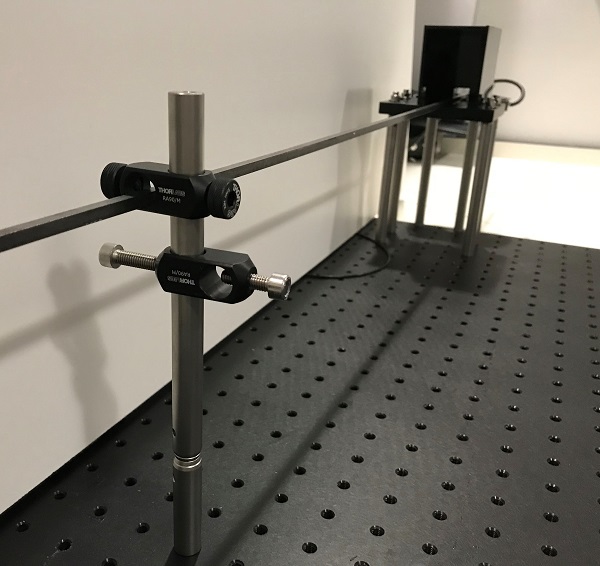 Building on previous research, which had identified multiple brain regions involved in balance, this new study details how one specific region can orchestrate a series of precisely timed muscle activations to respond to unexpected changes in the environment and thereby stop animals from falling over.

Group Leader at the Sainsbury Wellcome Centre, and first author on the paper, Andrew Murray, Ph.D., commented on the importance of the research:

The LVN was found to first activate muscles to put the foot back down onto the beam in response to a balance perturbation, and then strengthen and stabilize the limb muscles and joints to enable the animal to reposition itself back over the centre of the balance beam and continue walking along.

The researchers characterised two distinct cell types within the LVN that work together to generate an appropriate motor response consisting of two phases: the LVNextensor population, which generate muscle extension, and the LVNco-activation population, which co-activate antagonistic muscles in the hindlimbs.

“While we identified two distinct cell types, there are likely to be many different types of neuron in the LVN that activate different groups of muscles according to the context, thereby producing the muscle response most appropriate for the situation,” Dr. Murray explained.

“The LVN has a diversity of cell types, which means that it can implement different parts of a motor program in the correct sequence in order to maintain balance,” Dr. Murray continued. “The initial extension was almost always present and our thinking at the moment is that this is a quick fail-safe mechanism to respond to an unexpected acceleration and thereby buys the brain more time to coordinate a more nuanced context-specific response.” 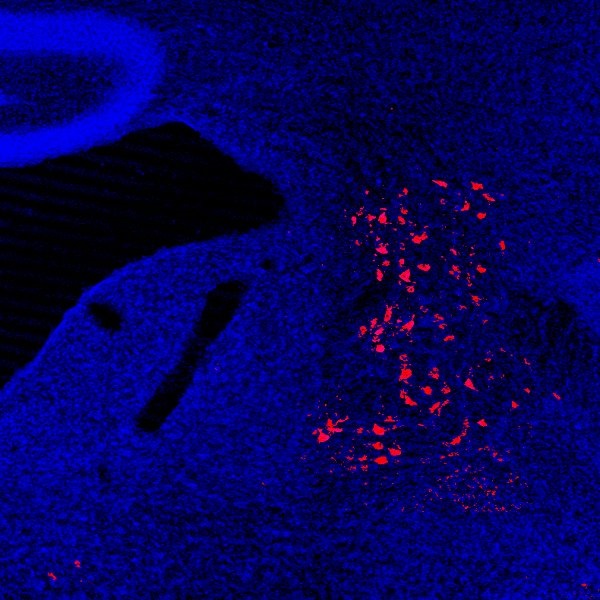 Neurons in the LVN (in red) that project to the spinal cord.

These neurons were labelled with the injection of a retrograde tracer into the cord.

To confirm the importance of the LVN in maintaining balance, the researchers silenced the region and found the mice were then unable to maintain their balance when the scientists nudged the beam, thus indicating that the LVN is responsible for orchestrating the movements that keep the body balanced. Interestingly, no other region of the brain compensated for the LVN.

“We were surprised to find there didn’t appear to be a back-up response when the LVN was silenced. One of the typical difficulties with neuroscience experiments is that when you delete a pathway, the animal often finds a new way to compensate as the brain is highly plastic. However, despite going through the task many times over the course of a few weeks in this study, the animals did not seem to adapt. This points to the LVN orchestrating this response,” Dr. Murray remarked.

“The pathways we have found in the LVN may be reasonably conserved in humans as every animal needs to be able to control its posture. All mammals have some form of vestibular system, which tells the animal which way is up and which way is down, and some form of projection system from the brain that keeps the posture the right way up. However, the system in humans is likely to be much more complex as humans are bipedal and not as naturally stable as mice,” Dr. Murray continued.

While the current lack of genetic markers for the LVNE (extensor) and LVNC (co-activation) populations meant that the researchers were unable to selectively silence the distinct cell types to examine the effect on early- and late-phase muscle activations, they plan to delve deeper into the brain science of balance to uncover the precise mechanisms that guide the process of selecting contextually appropriate motor responses to balance perturbations.

“In this study, we found that muscle responses were context-specific. For example, we could activate the righting response when the mouse was on a balance beam but not on a treadmill. This suggests that the circuits that allow the mouse to maintain balance are active in conditions where the mouse feels their balance may be threatened, such as on a balance beam; whereas the circuits are not likely to be needed when the mouse is close to the ground, such as on a treadmill” Dr. Murray explained. The researchers plan to investigate this further in upcoming studies.

Tom Otis, Ph.D., Chief Scientific Officer at Sainsbury Wellcome Centre and Professor of Neuroscience at UCL commented: “This study is an elegant exploration of the brain circuits that help one maintain balance. Murray and colleagues have uncovered rapid phases of neural control triggered by a loss of balance; first the brain drives limb extension to provide protection, then it triggers a general increase in limb muscle tone to stabilize the body. Their finding that these mechanisms depend on context and thus are likely learned is fascinating. Going forward they are in a perfect position to explore one of the hallmarks of coordination, how the brain learns to make rapid-fire decisions in order to maintain balance.”

This research was supported by the Gatsby Charitable Foundation, the Wellcome Trust, the Mathers Foundation, Project A.L.S., the National Institutes of Health (NS0332245) and the Howard Hughes Medical Institute.