Fostering an open and supportive research community at SWC

Fostering an open and supportive research community at SWC

A year after founding the SWC’s Research Culture Working Groups (RCWG), it feels important to reflect on the progress we have made towards fostering a more inclusive, open and supportive research community at SWC.

The Group’s aim is to provide an additional cross-institute space for creative discussion and problem-solving about pressing issues and exciting ideas that apply to staff and students alike.

There is increasing evidence, including from Wellcome’s 2020 survey, that, globally, research cultures have a significant—and often negative—impact on both science and the wellbeing of those who work in science. The Covid-19 pandemic provided additional motivation to address this. Working from home, or with very limited in-person contact, reduced our sense of community and, for many, increased uncertainty around their future careers.

Spencer Wilson, PhD student in the Murray lab, initiated our thinking about these challenges at SWC. He began by discussing with fellow students, postdocs and the leadership team about what we could do “to build a community that we can be truly proud of, a community that truly breaks the mould for a research institution.”

From these conversations, we started to look for new and additional approaches to making SWC the collaborative, progressive institute we aspire to be. 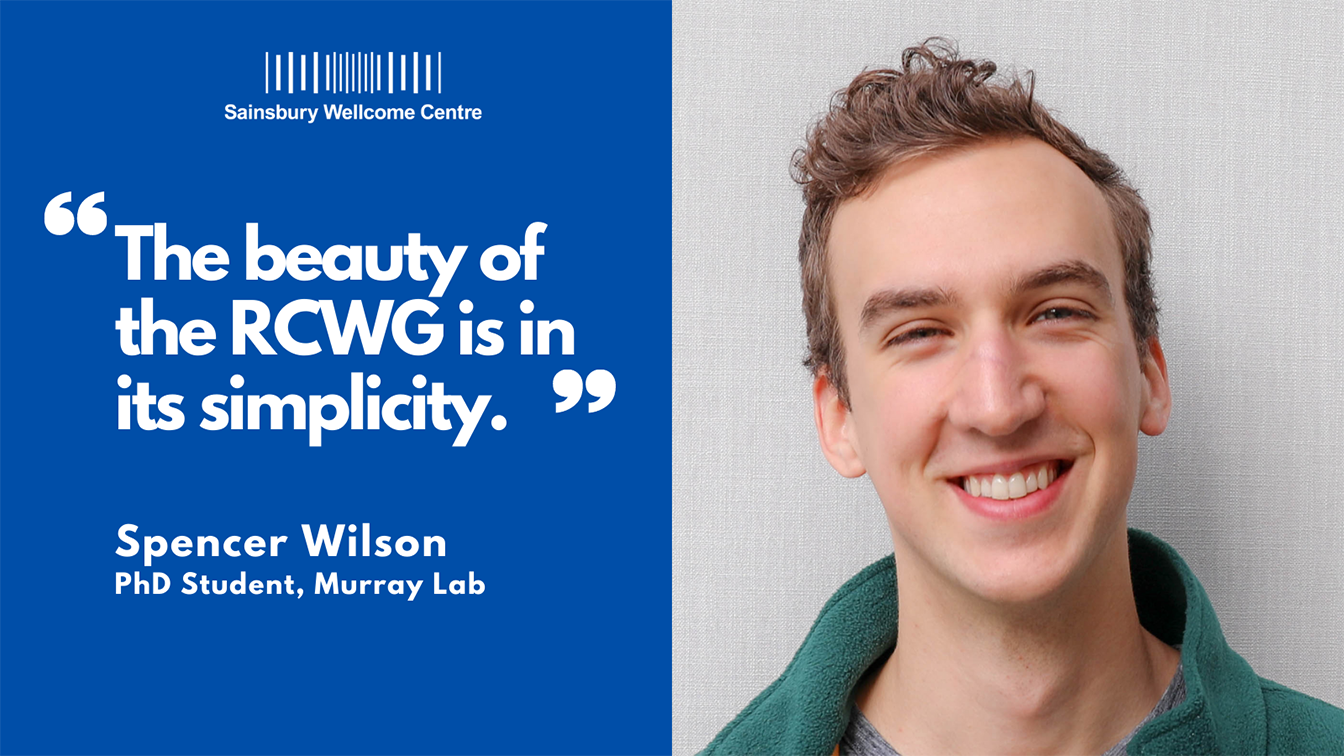 We surveyed the community to understand the kind of culture-related needs and wants that the Group could tackle. Some clear priorities emerged from the survey, including:

Everyone at SWC was invited to participate in the RCWG, and in the first meeting we discussed the survey results alongside the initial volunteers’ motivations for joining. These overlapped closely, and coalesced into four subgroups focussing on Careers; Community; Communication; and Research. Motivated by institute-wide discussions, we have since added another group on Diversity. Volunteers join these groups based on their own priorities; for example, Eleni Amaniti, Head of the Neurobiological Research Facility, said:

“For me, poor communication was an issue I could get behind, since I have seen communication to be important not just for managing husbandry in the NRF, but also cultivating better relationships between and among researchers who use the NRF's services. So I decided to contribute to the rcwg-communication subgroup.”

The motivations that Spencer had identified also resonated in many of the initial volunteers’ decisions to join. Miranda Mathews, a postdoc in the Murray lab, writes:

“I got involved with the community rcwg subgroup because I believe having a strong, positive sense of community is fundamental to a healthy work environment. This has been particularly evident throughout the pandemic and also now, as we move forward.”

The first volunteers spanned labs and career stages among researchers, professional services and scientific support roles. The group was therefore well placed to immediately tackle the theme—from both our survey and Wellcome’s research—of breaking down the ‘us and them’ feeling between different teams. As Hernando Martinez Vergara, postdoc in the Mrsic-Flogel and Stephenson-Jones groups, wrote:

“I was very happy to see such a big initial momentum, with many people at different career stages getting involved. That was a direct reassurance that I was not alone in caring for this, which automatically increased my sense of community within the building.”

The RCWG immediately provided a space to hear others’ perspectives, understand the challenges and suggest solutions based on different experience and knowledge. This is one way that the Group acts as a microcosm of the tasks it aims to achieve.

A second essential theme was ensuring that everyone has a voice. The RCWG aims to work in ways that promote this; as Spencer put it:

“The beauty of the RCWG is in its simplicity—get a small group of changemakers in the same room on a regular basis to share their perspective and brainstorm how things can be better. This cross-institute dialogue is absolutely key to generating progress in the community, to make sure everyone feels empowered, respected, and heard. This helps everyone!”

In particular, we experimented with processes to ensure that meetings are not dominated by a few, more-vocal people. We discussed and tested several practical ways to create space for everyone to speak, before deciding collectively that people should raise their hands and be called on by the chair before speaking.

We aim to make decisions by consensus. Everyone, including non-members, can make proposals for discussion and refinement by the group or sub-group(s). The sub-groups’ work is discussed by the main RCWG, to ensure that all groups are aware of projects that overlap with their own work and might impact on different teams of colleagues.

Membership of the group has grown and changed over the past year, with people moving between sub-groups and giving more or less time to their work as their own schedules, and the needs of the community, change. As Fred Marbach, postdoc in the Stephenson-Jones lab, said:

“Organising and discussing building-wide issues takes a lot of patience and time. We all felt this immediately after starting, and efforts quickly scaled back after a few months. This is a long term effort, however, so pacing ourselves is not a bad thing. The time investment has been worth it though – it feels good to contribute, because it increases the sense of belonging to SWC.”

Inclusivity is promoted by having all non-meeting discussion take place on open Slack channels, making all minutes freely accessible, and giving regular updates via Slack, Town Hall meetings and internal newsletters. In these ways, the Group has tried out effective mechanisms for, and contributed to, SWC’s culture of open discussion and collaborative problem-solving. 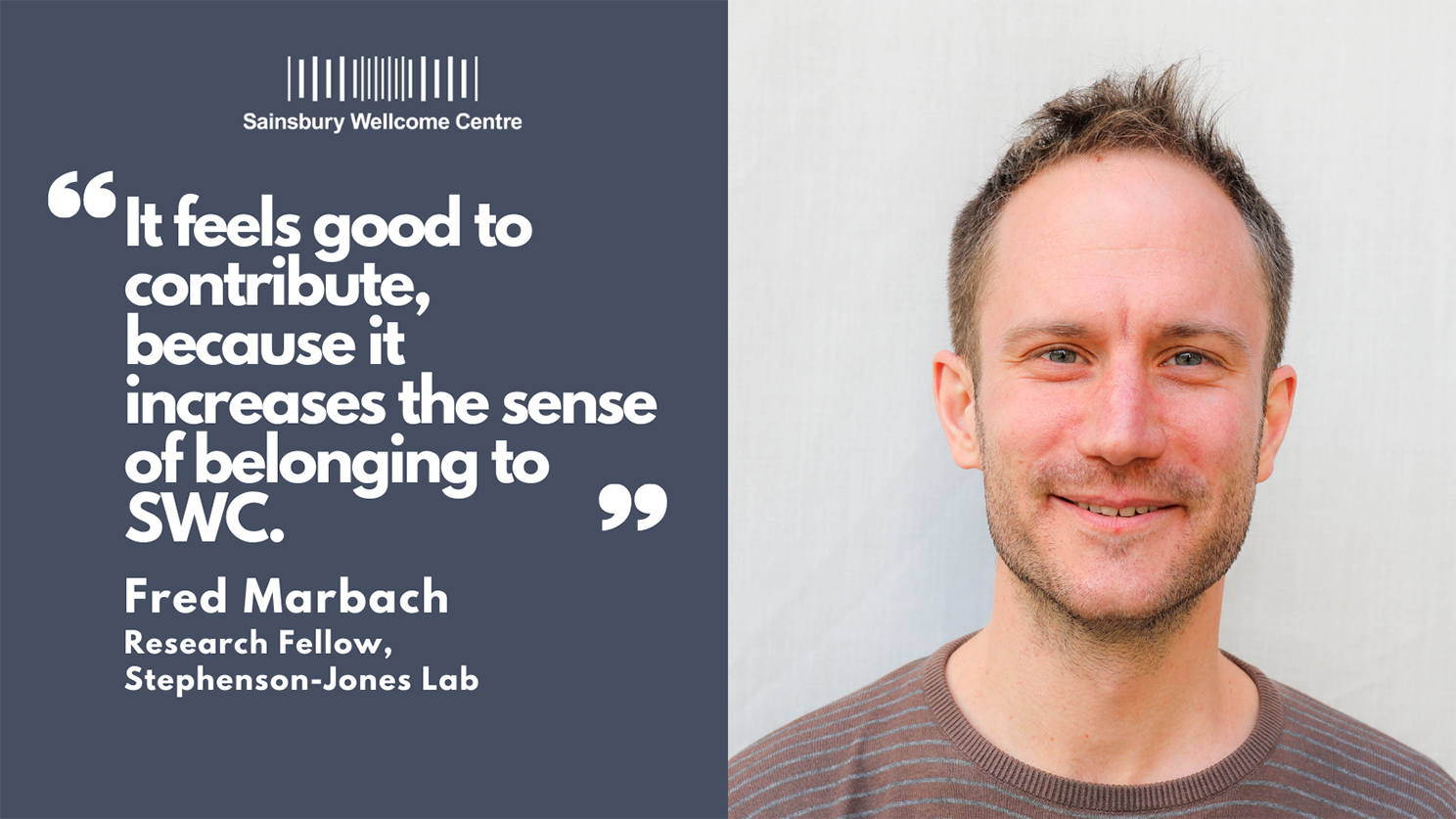 Outputs and next steps

In the last year, the four sub-groups have worked on initiatives including:

Much more has been accomplished and there are many more exciting proposals in the pipeline. But on top of these concrete achievements, the RCWG has also already provided new spaces for colleagues from across SWC to work together, think creatively and feel supported in making improvements to our culture. Several members of the groups commented that along with the actual outputs, involvement in the working groups has helped them to feel closer to the SWC community. PhD student Zane Mitrevica wrote:

“Being part of the RCWG has prompted me to think deeply about the academic system beyond my field of interest and it has given me a chance to contribute to tackling some of the associated issues at least at the level of our institute. On a more personal level, involvement in the RCWG has led me to meet and work with people I would have been unlikely to interact with otherwise, and that is an overwhelming positive.” 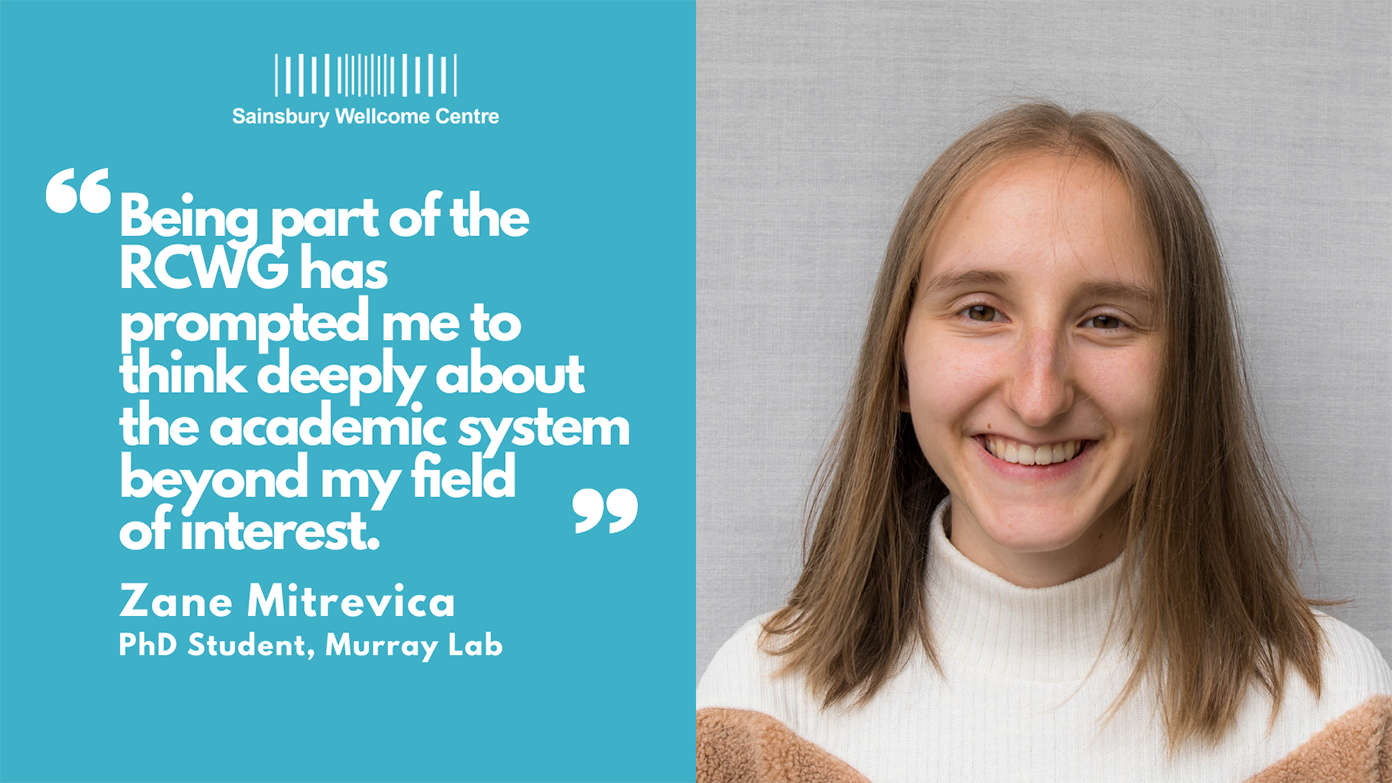 The Working Groups also provide space for wide-ranging conversations; as Sthita Pati, postdoc in the Stephenson-Jones group, said: “This clarifies what we stand for and gives us a chance to contemplate on where we are heading.” The Group have discussed the values that SWC both holds and aspires to, which has helped us to focus our activities, both internally and around public engagement, on those areas which are most important to the SWC community.

A current challenge we are tackling is ensuring that the whole SWC community is engaged in and able to contribute to the development and delivery of the groups’ initiatives. As Hernando wrote, “We want to hear from you, we want to come up with solutions that benefit everyone, but for that we need everyone to be involved in one way or another.” We also need to make sure that we maintain momentum and engagement in the groups, especially as current participants move on to new career stages.

But given the progress we have already made, and the positive experiences of participants so far, there’s good reason for optimism that this structure can continue to adapt and help to make the kind of cultural changes that we are aiming for. And at the very least, we will be helping to address Spencer’s vital goal that “We need more ideas, more weirdos, more orthogonality, more diversity, more fun. Otherwise this place will find the worst fate of all: it will be boring.”