Elucidating the role of local interneurons in fear leaning

Elucidating the role of local interneurons in fear leaning

While the functional role and plasticity mechanisms of projection neurons during associative learning have been extensively studied, to date, little is known about the contributions of local interneurons. In the second Emerging Neuroscientists Seminar Series (ENSS) lecture, Dr Sabine Krabbe outlined her research using a fear conditioning model system. I caught up with her to find out more about the functional contribution of amygdala interneuron subtypes to associative learning.

Is all fear learning associative?

Usually when we talk about fear we are referring to something very specific, which means that we are associating an aversive event to a certain stimulus or a certain context. In this learning process, the stimulus we associate the aversive experience with is initially a neutral cue, but it becomes predictive of a potentially dangerous situation, so that we change our behaviour when we are exposed to it the next time. There are also innate fear responses, usually to a specific stimulus, but these are not learnt and instead can be evoked without any prior experience.

In contrast, anxiety is more diffuse and a more complex emotion, so it is not necessarily associated to a certain stimulus, but it is a broader feeling. 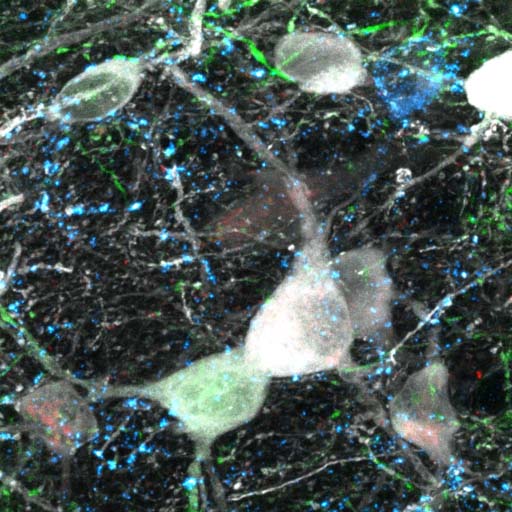 Can you please outline why you are using a fear conditioning model system to study the functional contribution of amygdala interneuron subtypes to associative learning?

The beauty of fear conditioning is that it is a very robust learning paradigm. For example, you can do just a single trial of fear conditioning using an auditory cue paired with a mild foot shock and you will immediately get a behavioural response and the animal learns to associate the auditory cue to the aversive stimulus. This is a really nice system to study general mechanisms of associative learning.

The question I was interested in is how are inhibitory interneurons, which are local circuit elements, contributing to this learning. In contrast to probably 30 years of work, where people have focused on excitatory projection cells, which are the majority of cells in the brain, we have really little understanding of how individual, local, inhibitory circuit elements contribute to learning and behavioural output.

Why have few people focused on the contribution of local inhibitory interneurons to date?

Partly because they are in the minority and only make up around 15-20% of the cells in cortical circuits, but also because they are really diverse. Previously in the literature, people reported around 5-8 subtypes, but using new molecular approaches to classify these cells, the numbers have gone up to as many as 49 different subtypes.

You can differentiate these cells based on molecular marker expression, their morphology, connectivity and so on, but they are pretty difficult to specifically target and record from in an animal.

The big advantage we now have are new genetic tools. Transgenic mouse lines allow us to specifically target these cells and we can now test if these molecularly defined subtypes are also functionally defined subtypes.

What have been your main findings?

Also their functional contributions and in vivo activity show that they are also temporarily precise, which means that they respond to specific stimuli, for example, to the predictive auditory cue or to the aversive stimulus in fear conditioning. They can also be modulated by behavioural states, for example, in high fear state versus a low fear state. Thus it is not just broad inhibition – contextually different subtypes have very specific roles. 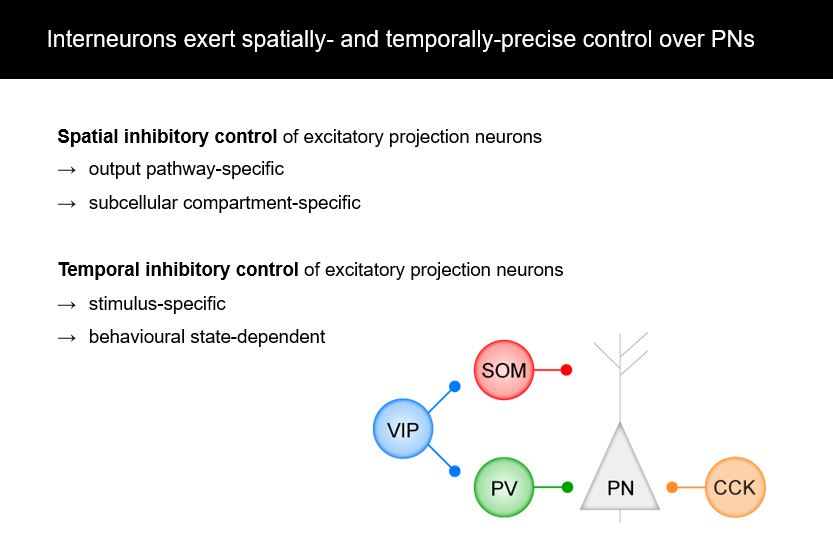 Do the distinct projection neurons subserve different aspects of fear?

Yes. One aspect we previously focused on in our lab were projections from the amygdala to prefrontal cortex subdivisions. For example, the infralimbic and prelimbic subdivisions have very different functions in fear learning, fear expression and fear extinction, which is learning that a stimulus doesn’t predict a fearful stimulus anymore. Accordingly, the activity balance of amygdala projections to these distinct subdivision of prefrontal cortex is causally involved in fear extinction, an effect that is likely supported by amygdala CCK interneurons.

More recently we have started the deep brain imaging approach where we get larger datasets, including bigger populations of projection neurons in individual animals, and we have looked into how these projection populations encode different behavioural states.

With these data one might ask what happens during exploration when the animal is in a low fear state? What changes during defensive, high fear states? For that we looked into the various projections, to the prefrontal cortex in general, to the nucleus accumbens, or to the ventral hippocampus. We found that if you look at the whole population, the activity of two major neuronal ensembles in the basal amygdala can predict switches between exploratory and defensive behavioural states across different environments. If you look at this general behavioural state, like a general fear state, it’s actually broadcasted quite widely to different brain regions.  But we certainly still see differences in sensory coding induced by CS or US exposures in distinct projection neuron populations.

Why does it make sense that the projection neurons exhibit different plasticity mechanisms?

Considering that some of these projections have very different roles for fear learning or fear extinction, you of course don’t want them all to respond the same during certain paradigms. Instead you need different plasticity mechanisms to exhibit a different type of behaviour and to have behaviour flexibility when a new situation in the environment comes up.

How does this adaptive disinhibitory gating allow the brain to discriminate important from irrelevant information?

This is actually quite important when you consider that you have a changing environment, and for the first time that a novel stimulus which is very aversive arises, you want rapid behavioural adaptations to the stimulus. But as soon as you have learned about it, you don’t want to engage anymore in it. This adaptive disinhibitory gating allows us to only react to a stimulus if it is new and meaningful. As soon as we have learned about it and changed our behaviour accordingly, we don’t really need to focus on it anymore. We believe that this effect is not only important for fear learning, but might actually be a general circuit motif for both aversive and appetitive associative learning that allows us to discriminate unexpected important from irrelevant information and ensures appropriate behavioural adaptations.

What are the main clinical implications of this work?

In general, our work relates to anxiety disorders, such as Post Traumatic Stress Disorder (PTSD), where you have maladaptive learning to certain cues and environmental stimuli.

For a long time it has been assumed that the classical subtypes defined expression of certain molecular markers correlate with functional properties. However, what we actually see if we record from large populations of these cells is that they are highly diverse and within one of these populations we see very diverse responses in terms of stimulus specificity, connectivity and morphology of the cells. And so we need new mechanisms to discriminate these cells.

One option is to try to use a more diverse molecular classification. What I would like to do is see how do functional subtypes in vivo map onto these more refined molecular subclasses, which would give us a handle to investigate functional subtypes further by looking at detailed connectivity, morphology and so on. 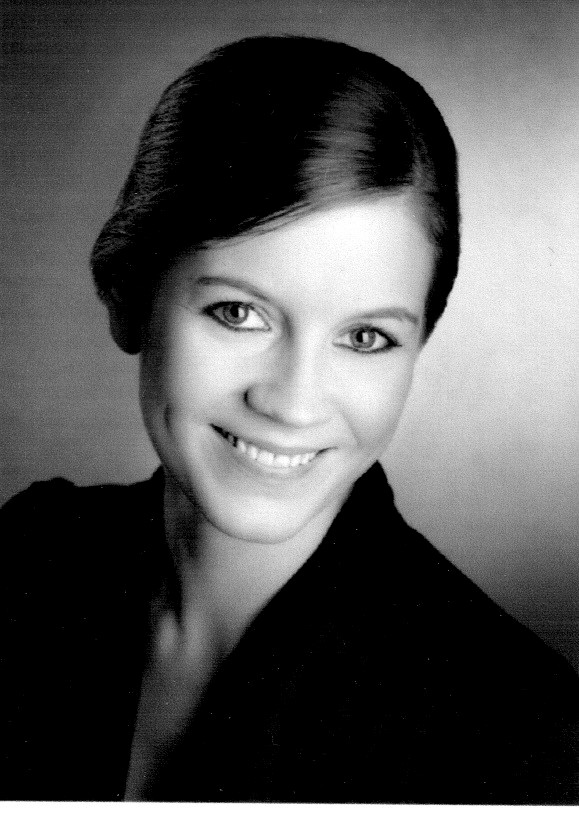 I studied Human Biology at the University of Marburg and received my PhD in Neurophysiology in 2012. In a collaborative project in the laboratory of Jochen Roeper at the University of Frankfurt with Eleanor Simpson and Eric Kandel at Columbia University New York, I investigated the neural circuit mechanisms of dopaminergic dysregulation in schizophrenia. I then joined the laboratory of Andreas Lüthi at the Friedrich Miescher Institute for Biomedical Research in Basel as a postdoctoral fellow. Supported by a NARSAD Young Investigator Award, I focussed my research on the dissection of inhibitory amygdala microcircuits in fear learning and anxiety using a combination of deep brain imaging, electrophysiology and optogenetic approaches. Since February 2018, I am hosted by Scott Sternson’s lab as a visiting scientist at HHMI Janelia Research Campus to address how genetically-defined amygdala neurons encode information during different behavioural and metabolic states.