How does the brain perceive time to enable cognition?

How does the brain perceive time to enable cognition?

An interview with Dr Joe Paton, Champalimaud Centre for the Unknown, conducted by April Cashin-Garbutt

Every day we think, apply rules and plan ahead, but how does the brain perceive time to allow us to perform these cognitive functions? The hidden and fleeting nature of these representations in the brain make them very interesting to study, but also rather challenging. Dr Joe Paton recently gave a SWC Virtual Seminar outlining the carefully-designed behavioural experiments his lab performed in rodents to isolate and exaggerate these latent processes and bring them under experimental control. In the following Q&A, he explains how his research may help us understand the way basal ganglia circuits contribute to aspects of decision-making, action selection and motor control.

How do you define cognition?

Traditionally cognition has been defined as a list of complex functions such as working memory, decision-making and planning. But it is not obvious what unites these processes and not all of them are necessarily what we would consider cognitive –  for example some decisions are very simple.

The way I like to define cognition is to think about the set of variables the brain is using to perform a function. Sometimes the brain relies on variables in the immediate environment alone and can easily map those directly to a behavioural output – this is not particularly cognitive. For me, cognition involves functions that require the brain to use variables that aren’t in the immediate environment such as working memory or timing.

Why are you particularly focused on studying temporal processing? Why is understanding how time is encoded so important for basal ganglia function?

I have a longstanding interest in how animals learn. Animals are very good at making predictive relationships between events in their experience and meaningful outcomes like rewards. They can do this across many different timescales, even when there is a large separation between a predictive event and a meaningful outcome. You can think about this ability to detect causal relationships as an inference process performed on timing information – when things occur relative to one another is what determines whether one thing predicts something else.

When I was starting my lab, it wasn’t really known how the brain kept track of when things happen. And so my initial interest in temporal processing was motivated by an interest in understanding how animals infer this causal structure in the world. As time went on, I realised that these timing behaviours offer an opportunity to take experimental control over latent dynamic processes and allow us to get quantitative readouts of how these processes proceed even though they are hidden in the animal’s brain.

What was previously known about the role of the basal ganglia in animals’ judgements of elapsed time?

There were a number of different clues that the basal ganglia might be a structure that’s important for timing. There had been various lesion and pharmacological studies and a handful of studies where people had recorded from neurons in the basal ganglia that suggested time may be encoded there. In addition, people with certain conditions that impact the function of the basal ganglia show timing deficits, such as Parkinson’s, Huntington’s disease and attention deficit hyperactivity disorder (ADHD).

There was also a theoretical clue as the basal ganglia is involved in learning to select actions based on reward experiences. This learning requires access to timing information, so basal ganglia might play a role in the judgement of elapsed time.

Can you please outline the task you developed involving rodents making judgements on time duration?

There are two main types of tasks that have been used to study time behaviour: motor timing tasks, where your read out of the internal timing process is when the animal or human subject produces a behaviour; and perceptual timing tasks where you ask the subject to indicate something about their timing process by what action they produce.

In this research, the task we used involved interval categorisation. We asked the animals to choose between a left or right reward port depending on whether the interval between two tones was shorter or longer than the learnt category boundary. By testing the animal with different time intervals we could get a quantitative description of their discrimination ability. We were then able to compare the sensitivity of the animal’s behaviour with the sensitivity of the neural activity we observed and when we found a tight match they became candidate neural signals for driving the decision process.

How did you manipulate neural activity during your experiments involving the task?

Since we started studying this behaviour, we have performed a number of manipulations including pharmacological and pharmacogenetic inactivation, and optogenetic stimulation and inhibition of a variety of cell types. Recently, we turned to a somewhat unconventional method to manipulate activity: temperature.

We had observed that the animals long/short judgements correlated with how quickly or slowly the state of neuronal population develop along some reproducible pattern. To try to manipulate this feature we turned to temperature, because evidence from previous studies on invertebrate systems showed that you can use temperature to slow down or speed up patterns of neural activity without changing the pattern itself.

In a separate set of experiments, we used optogenetic manipulations to remove activity from certain genetically-defined cell types within the basal ganglia so we could study motor control and action selection. 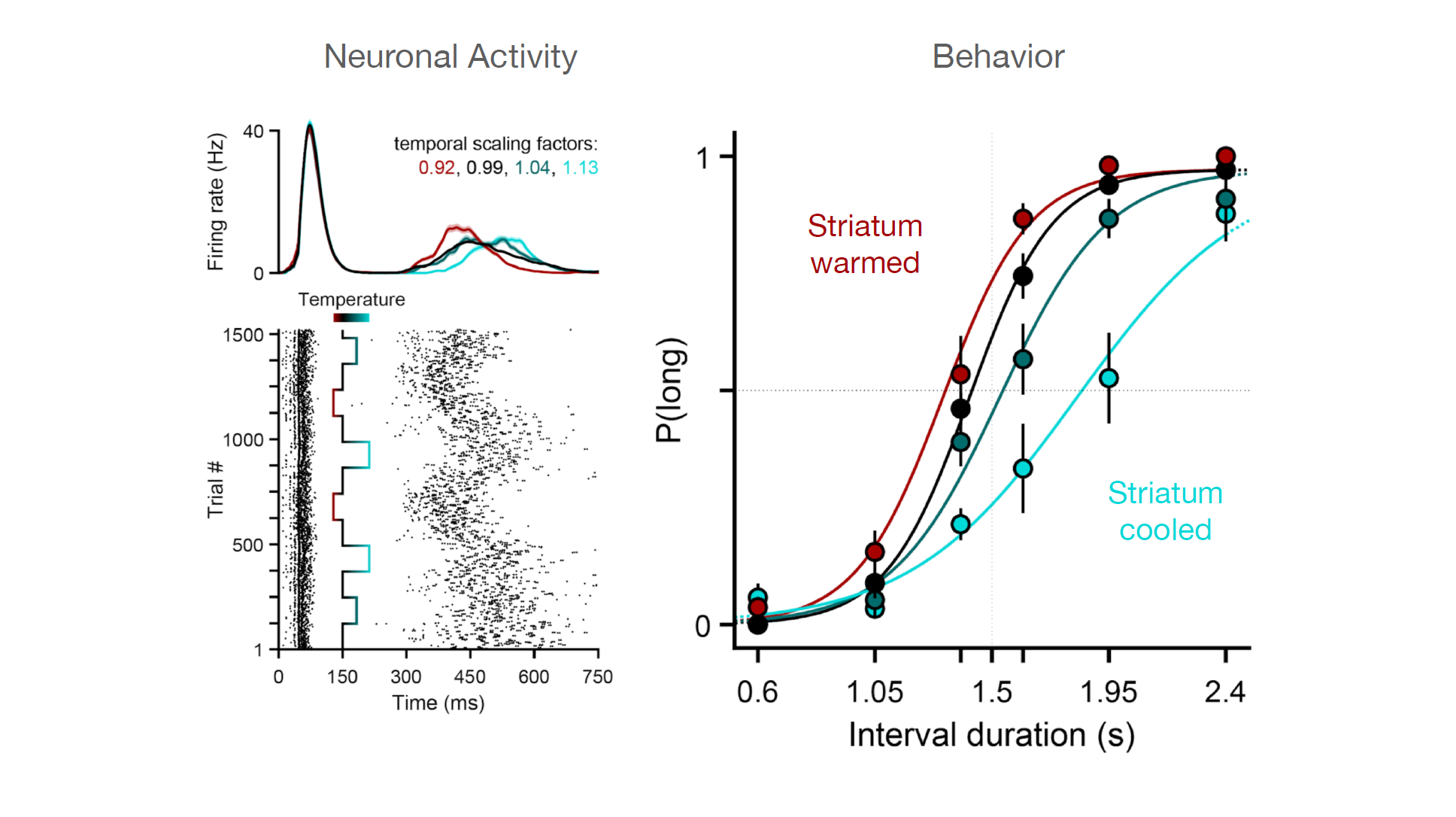 Together with the Champalimaud Research hardware platform, we designed a custom thermoelectric implant and used it to manipulate the temperature of the striatum, a brain area in the basal ganglia that our lab and others have shown to be important for temporal processing. We found that the time-course of neural activity could be dilated or contracted using temperature (left panels) and that this led to systematic changes in duration judgments (right panel, the probability of a “long” judgment depicted on the y axis) in behaving rats that were trained to judge intervals as being longer or shorter than 1.5 s. These data represent causal evidence that the speed of neuronal population dynamics in the striatum provides a basis for time in the brain. (Adapted from Monteiro T.*, Rodrigues F.S*., Pexirra M.*, Cruz B.F., Gonçalves A.I., Rueda-Orozco P.E., Paton J.J. (2020) Using temperature to analyze the neural basis of a latent temporal  decision. bioRxiv 2020.08.24.251827; doi: https://doi.org/10.1101/2020.08.24.251827)

What were your main findings and how might they help us understand how basal ganglia circuits contribute to aspects of decision making, action selection and motor control?

Our main finding was that by dialling up and down the speed of population activity, we were able to affect the temporal evolution of a decision variable related to elapsed time without affecting other aspects of the timing of the behaviour, such as the low level timing of movement. We didn’t see effects on latency for animals to respond or how quickly they moved. There was a disassociation between the effects on the decision process and the effect on low level timing of movement.

This is consistent with what we observe in conditions like Parkinson’s where people are able to make normal movements but sometimes struggle to initiate these actions. This suggests that the basal ganglia circuits are not critical for regulating the details of movement but instead is involved in initiating or selecting the right behaviour at the right time.

In our research, we also found some of the clearest evidence in the patterns of activity of neurons in these two main pathways to the basal ganglia for functional opponency. It was previously hypothesised that the direct and indirect pathway projections from striatum have opposing influences on behaviour, yet when people have recorded the activity from neurons in these two pathways they often find them to be active together. This led to people thinking that they can’t be opposing each other if they are active together. However, it is difficult to know whether the two neurons are active because they are doing the same thing or if they are opposing each other. Our approach tried to tease this apart.

We trained animals to proactively suppress movement and we saw that not only were there multiple forms of opposite patterns of modulation in these two pathways but that the indirect pathway was critical for the animal’s ability suppress the temptation to move.

While we often think about behaviour as being guided by what we want to do, equally important is the need to shape behaviour through suppression of action. For example, if you imagine an animal preparing to pounce on its prey, it needs to suppress the urge to move until the moment is right. Similarly, a child in a classroom who knows the answer to a question has to suppress the urge to say the answer out loud until the teacher asks them. Dysfunctions in the ability to supress the urge to do things are therefore relevant for all sorts of situations in humans such as ADHD in children, addiction in adults and so forth.

We have focused a lot on the striatum, the major input area to the basal ganglia, but this is embedded in much larger circuits that involve other brain areas. One direction we are going to explore next is what are the other components of the circuit in which these mechanisms are embedded. For instance, if we cool frontal cortical areas that we know are interconnected with the region of the striatum that we cooled, do we see similar effects and can we find evidence for a larger circuit that’s controlling the dynamics underlying temporal processing?

Additionally, we are starting to look at how specific circuit elements in different regions of the striatum might interact across the whole area to produce the kinds of behaviour we see in these simple tasks. We don’t think the striatum is a monolithic structure where all regions in a given context are doing exactly the same thing. There are always multiple parallel mechanisms that the brain is employing to try and control behaviour and it is the interaction of those parallel mechanisms that results in the behaviour we see. 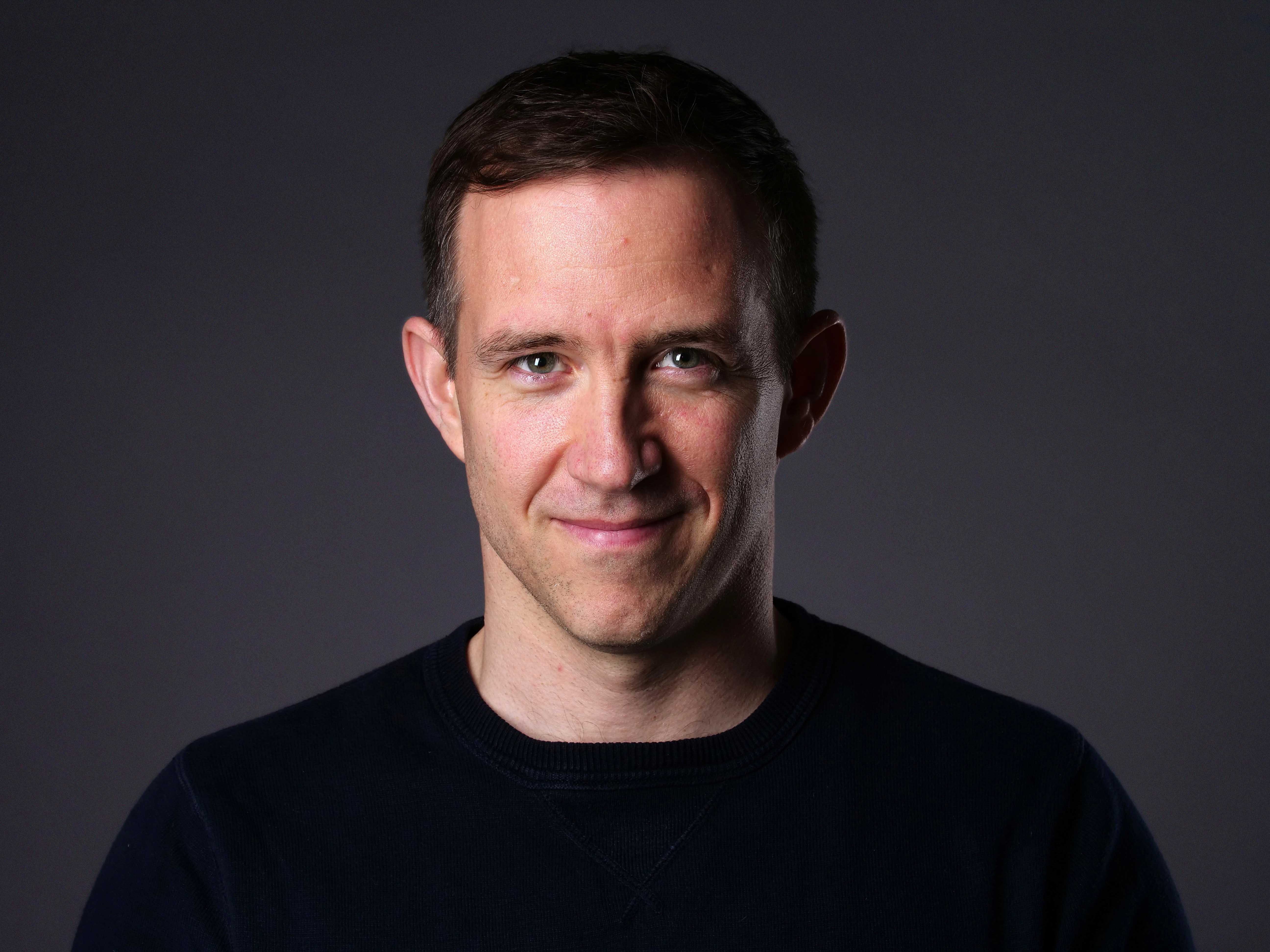 Joe Paton received his undergraduate degree in Biology from Tufts University in 2000. After a brief stint as a technician in the lab of Bill Newsome at Stanford, in 2002, Joe started work towards his PhD at Columbia University in the laboratory of Dr. Daniel Salzman, where he studied the neural mechanisms that underly learning about positive and negative value in the primate limbic system. In 2008, Joe received his PhD with distinction and joined the Champalimaud Neuroscience Program as a Fellow, becoming a Principal Investigator in 2012. At Champalimaud, his lab seeks to understand the algorithms and circuit mechanisms underlying cognitive behaviours, with a particular focus on temporal processing.  In 2017, he became an HHMI International Research Scholar and joined the Fulbright Commission in Portugal, as a member of its Executive Board. At Champalimaud, Joe has been the Director of the International Neuroscience Doctoral Programme since 2017, as well as Co-Director of the Cajal advanced summer training Course in Computational Neuroscience. He became the Director of the Champalimaud Neuroscience Programme in 2019. 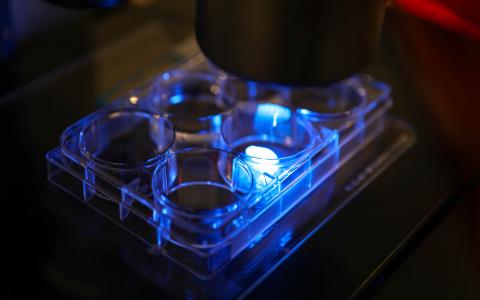 Space and time in the entorhinal cortex