Uncovering the logic of spinal circuits

Uncovering the logic of spinal circuits

The somatosensory system plays a pivotal role in controlling movement via its reciprocal interactions with the spinal locomotor circuitry. In the inaugural lecture of the Sainsbury Wellcome Centre Emerging Neuroscientists Seminar Series (ENSS), Dr Graziana Gatto outlined her research detailing how dorsal spinal cord interneurons (dINs) specialise in processing different types of sensory inputs and how they generate stereotyped motor actions in response to these stimuli. In the following interview, Dr Gatto describes how her research combines genetic, optogenetic and pharmacological approaches to functionally and molecularly characterise the identity and function of these subclasses of dorsal interneurons.

How does the generation of rhythmic motor behaviours, such as locomotion, differ from generating protective reflexes or voluntary movements?

Generating rhythmic motor behaviours differs from protective reflexes mainly in how the activity of different muscles needs to be coordinated. For example, locomotion involves alternating the left and right leg, whereas during protective reflexes only one side of the body moves while the other side is required to stabilize posture.

The other thing that is always different is why we do certain movements. For example, we walk because we decide to, whereas protective reflexes are subconscious as we are wired to prevent harm.

What evidence is there to support a prominent role of dorsal spinal cord interneurons (dINs) in processing the motor response to aversive stimuli?

We have shown that manipulating the activity of the dINs changes the way that the motor response is generated. For example, if we block dINs we are unable to respond to threat, so instead of removing our hand from a hotspot, we just keep it there as we no longer see it as dangerous. 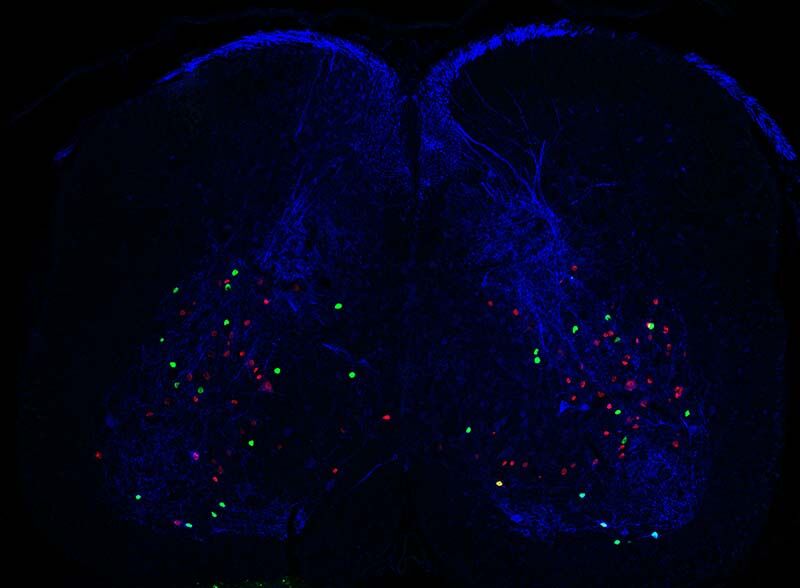 Can you please explain how you combine genetic, optogenetic, and pharmacological approaches to functionally and molecularly characterise subclasses of dorsal interneurons?

Our main line of work takes a genetic approach. We work with mice that express certain proteins that allow us to target specific neurons. For example, one such protein is a channel that is responsive to light, and allows us to use optogenetics, which means that certain neurons can be activated whenever we shine light on them. At the same time we can also test drugs on these mice allowing us to block certain pathways. Take pain for example, you can give an opioid like morphine to block pain and then see whether anything changes when you activate the neuron while morphine is present.

In terms of characterizing subclasses of neurons, it depends how you define a neuron ‘type’. The definition we use is that they are cells that do the same function and share similar characteristics. So first we want to know what the neuron does and second, we want to see if we are looking at a coherent group of neurons. This is why we need all these approaches because we need to check that the neurons have the same morphology, they express the same proteins, respond in the same way to certain stimuli and so on.

What is currently known about the organisation of the different functional cell populations in the dorsal horn? If there are specific roles, are they common at different levels of the spinal cord (cervical vs. lumbar)?

There have been a number of studies over the last decades that started to unravel what happens if we remove some of these neurons early on in development. For example, mice that completely lack some classes of neurons become unresponsive to heat, cold or itch. There have also been a lot of studies in which neurons were removed in the adult mice using different markers showing that again some of these neurons are essential to feel pain, itch or touch. However, what is missing is how the spinal cord develops to sense and discriminate all these sensory stimuli, and the understanding of the relationship between the early development markers and the adult ones. Our approach is linking development to adult function and seeing whether there is a logic behind why the spinal cord develops in the way it does.

There are specialised functions. For example, in humans, our hands are a lot more dexterous than our feet and that’s the same in mice. If mice are given a reaching task, they will use the forelimb, whereas if they have to scratch, they will predominantly use the hind limb. One of the things we realised is that there is a common set of neurons that generates movement for different type of behaviours, so the neurons that let you scratch are also the same neurons that make you walk.

The next question is how do you activate this neuron in a different way so they produce one pattern versus the other and how do we switch between different tasks, and where does this switch happen? Also, so far whenever we do this task in the lab, the mice are not stressed, not hungry, not in pain, but of course in real life you have a lot of more variables. In the future, we want to see how these variables affect the state of the mouse.

What methods will you use to investigate how the neurons switch between different tasks?

Now that we know which dorsal interneurons drive certain tasks, we can do genetic manipulations to activate two different neuron types at the same time and see what the outcome is, and if one task is predominant over the other. For example, we can make the mouse scratch by activating certain neurons and then we can make the mouse want to walk and see whether this overrides the scratching.

Are there any clinical implications of this research?

Knowing how the system works is very helpful when you are designing rehabilitation therapies after spinal cord injury. For example, research has shown that if you stimulate the sensory feedback people can regain motor control much faster. Understanding how the sensory input interfaces with the motor output can help design better therapeutic strategies as we want to minimize the activation of detrimental sensory pathways, like pain and spasms, and favour the ones that facilitate movement. Ideally we want to be able to selectively activate the neurons that promote motor recovery, sparing the activation of neurons that generate pain or undesired spastic movements. 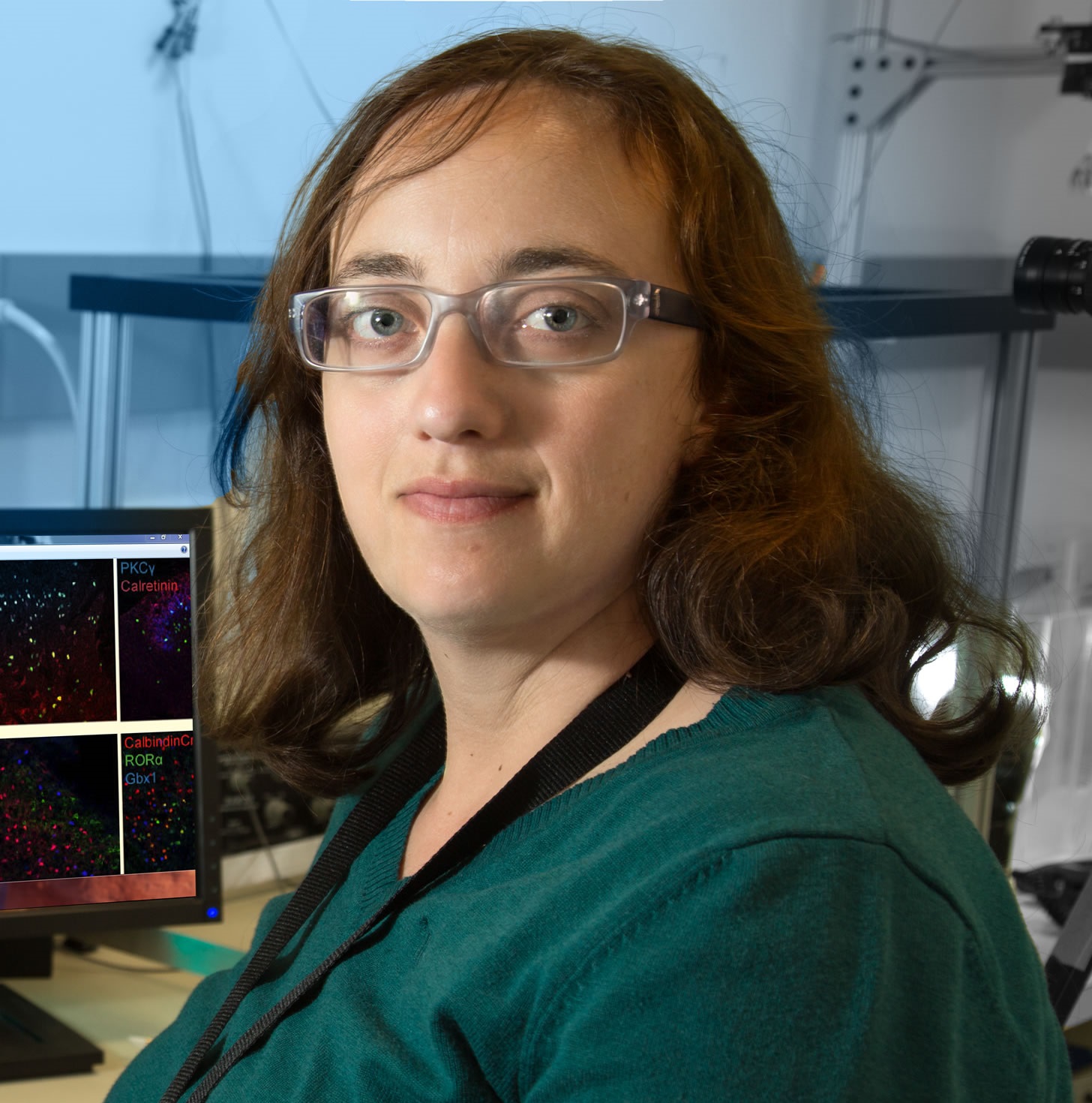 I graduated from the University of Naples in 2006 with a Master’s degree in Medical Biotechnology. During my research project in the lab of Prof. Stefano Bonatti, I characterised the molecular mechanisms by which the Epstein-Barr virus induces microRNA expression. Following a Summer studentship at the LMB-MRC in Cambridge I moved to the Max Planck Institute of Neurobiology in Munich where I obtained my PhD in September 2013. For my PhD I studied how the modulation of Eph/ephrin and neurotrophic factor signaling regulates motor and sensory neuron guidance while based in the laboratory of Rüdiger Klein. I then joined Professor Martyn Goulding’s lab at the Salk Institute as an EMBO Fellow in September 2014 to study the role of dorsal spinal interneurons in shaping the motor response to aversive stimuli. I am particularly interested in combining genetic, optogenetic and pharmacological approaches to functionally and molecularly characterize the different subclasses of dorsal interneurons involved in processing withdrawal reflex and itching behaviors.