How do we know that the brain plans volitional movements before they are executed?

Simple reflexive movements are hard-wired with a very fixed output; whereas volitional movements are very different, as they are not specifically encoded. For example, if you go to make a specific movement you have never made before, the brain has to use its dynamic programming ability so that on the fly it can produce something you’ve never done before.

Given that volitional movement is not something you can solve with a hard-wired system and you can’t make the movement based on sensory feedback as movements are too fast, there is a requirement for the brain to plan what the movement is going to be. It is thought that the brain pre-specifies the movement to the greatest extent possible and converts that into a set of muscle activations.

There is good human psychophysical evidence that the brain plans volitional movements before they are executed. The planning process takes some time to complete and experiments have shown that if you tell someone what movement they are going to have to make and give them some time, then they can make this movement much faster than if they weren’t given any time.

There are some interesting psychophysics studies in which the subjects were told, "You're going to use your arm to do a movement," and then told what movement to make, and it was found that they were much faster than if they were simply told the movement.

When the subjects were given even more information upfront, for example, “you are going to use your arm and you are going to pick up an object in this general vicinity” and then told the exact movement “pick up that pen,” then they are even faster still. So, it looks like we can take in information and pre-programme certain aspect of the movement such that, you don't have to do that again.

There is behavioural evidence too. For example, baseball pitchers usually concentrate really hard before they pitch, otherwise, the accuracy of their throws suffers. 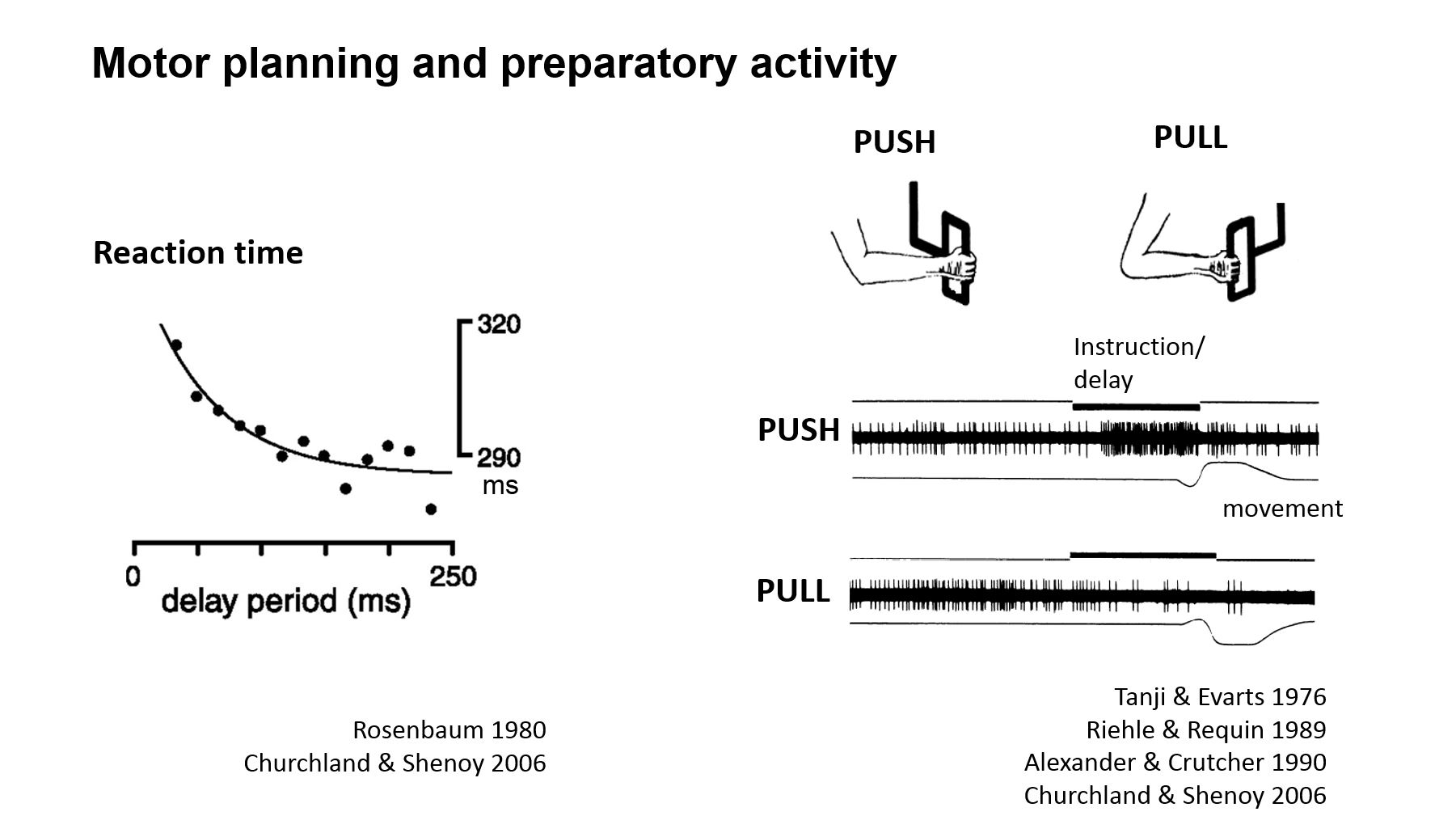 Which brain regions are thought to be involved in this preparatory activity?

This is one of the central focuses of my lab and many other labs. We know some brain regions that are involved but we don't know all the brain regions.

The neural correlate of motor planning was first discovered in humans by two German neurologists, Kornhuber and Deecke. They recorded EEG potentials in humans, and then told the subjects to make a volitional movement, such as moving their fingers. Next, they aligned the EEG recording traces to the onset of movement and what they saw was this gradual emergence of electrical activity over hundreds of milliseconds over the frontal cortex, mostly the motor areas. They call this the "readiness potential" or "Bereitschaftspotential" in German. This gradual build-up of electrical activity is what we think is a neural signature for the volition.

Later on, another famous experiment was performed by Libet who did the same experiment, but then later asked the subject when did they became aware of their intention to make the movement? Libet found that the readiness potential emerged well before the subject became aware of their intention and this led to a long debate about free will and whether we really are aware and in control of our actions.

This electrical build-up was detected in motor cortex, in frontal regions, but it is not thought that the movement is contained in that brain region; instead people now think it is a distributed process that spans many different brain regions.

For example, in recent work we found that if you inhibit the output of the cerebellum, which is classically thought to be more engaged with online motor control, you can abolish this preparatory or readiness potential in the mouse. 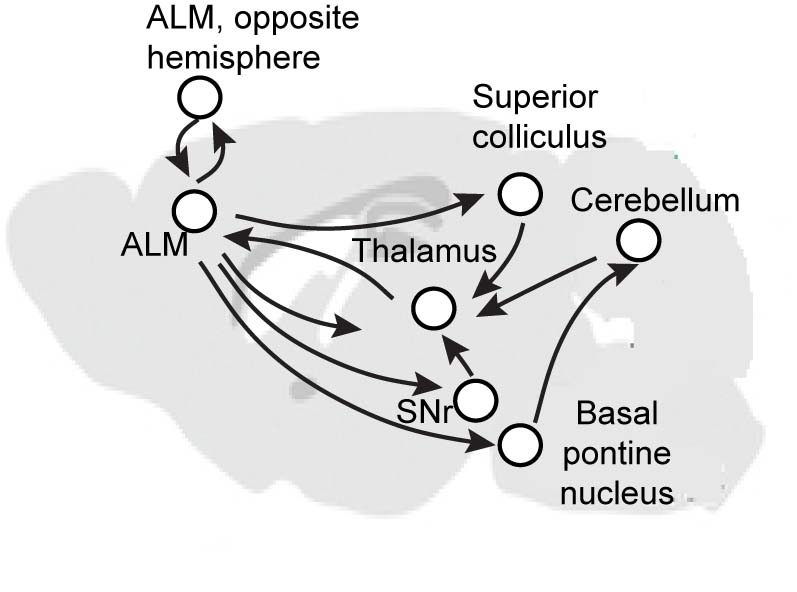 Why is it difficult to determine how this activity is mediated?

I think it is a difficult problem simply because it is such a distributed and recurrent circuit. This circuit is not built in a way that one area excites the next area, which then excites the next area. All the areas are talking with each other, which makes it very difficult to dissect and figure out what each region is doing, and in turn, how multiple regions interact to mediate this activity.

Up until now, it has been very difficult as you cannot do intervention experiments in humans and it is very difficult in primates. But with the advances in technology, it is now possible to recapitulate this phenomenon in the mouse. We now have a unique opportunity to go after this precise question: how does a brain generate this activity and in turn mediate motor preparation? The answer is very much ongoing.

How has your lab elucidated the mechanisms by which preparatory activity triggers movement?

Because of the accessibility of the mouse brain, we know that motor cortex ultimately triggers movement by its descending projections into the brain stem motor centres or to the spinal cord. The cells that project to these motor centres are a specialised sub-class of cortical neurons, they are called pyramidal tract (PT) neurons and they live in the deep layers, layer 5B, of cortex. The essential layout of movements is generated through the activity of these PT neurons.

Ultimately, these PT neurons convey a pulse of electrical activity to the brain stem, which triggers the muscle activation. This is a relatively simplified picture and there are additional mechanisms involved, such as inhibitory mechanisms that make sure the movement doesn’t occur too early.

To the first order, you can say the movement is triggered by the electrical activity in these descending neurons, and that's our access to the motor output. A few years ago, we did a study where we directly measured from these neurons and, indeed, we could see this population of neurons became active, not during motor preparation but much later, right before they initiate their movement. This tells us that there is a transfer of information from the preparation circuitry to the PT neurons which are activated later. 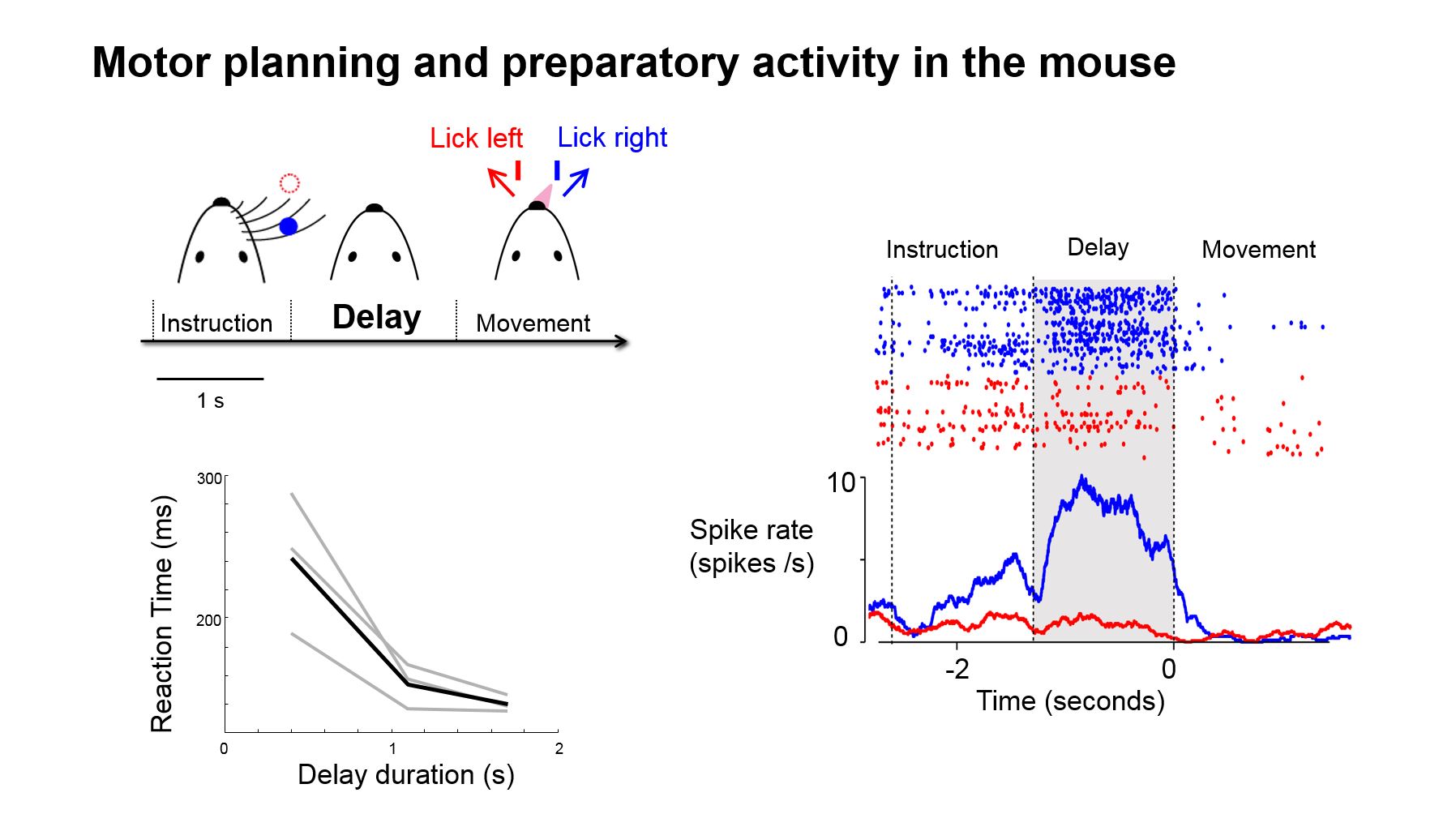 What implications does this research have for other types of flexible behaviour, such as decision making and short-term memory?

One way of thinking about motor preparation is as a form of short-term memory. It may not be as explicit as working memory, in the sense that we recall certain things and we hold it in our brain, such as a phone number, but motor preparation is a form of short-term memory in the sense that when you get ready for a movement, the brain goes into a state of readiness.

Imagine you are a runner at the start of a race getting ready to run. Your brain actually gets into a readiness state and then maintains that particular kind of internal state until you begin. We can directly measure this in the electrical activity of neurons. For example, we can measure neurons that become active during motor preparation, let’s call them ‘motor preparation cells.’

These motor preparation cells become active and stay active, so at the level of the neural circuit it becomes a very similar phenomenon as to how neurons behave during short-term memory tasks. The neurons are active persistently and this gives a platform to understand how their connections mediate a persistent activity, which is a form of short-term memory.

Even though the behaviour we are using is not exactly a sophisticated decision-making task, I think, at the level circuits and neural mechanism, it could tell us something, perhaps principals or general rules, applicable to many other neural circuits involved in decisions.

At the moment, the core focus of our research programme goes back to this question of: "What are the brain regions involved in motor preparation, and how do they mediate preparatory activity?"

There are two parts to this question. Firstly, we want to know which brain regions are involved, so we can map them out. And then once we figure them out, we want to try to understand this distributed network.

We want to take a reductionist approach, by which we manipulate and perturb a certain part of the circuit while measuring other parts of the circuit, and then do this systematically. This will allow us to collect data that tells us the characteristics of the circuit. Over time we hope that we will collectively understand some of the interactions and how specific interactions give rise to specific aspects of this activity.

How will you map out the brain regions involved?

We are somewhat inspired by the approach of the famous American psychologist, Karl Lashley. Although Lashley reached some conclusions that differ from the current consensus, I think his approach is very inspiring.

At the time Lashley wanted to find these so called "engrams" of memory, these neural substrate of particular memory in the brain. To find them, he went in and systematically lesioned different parts of the brain in rats and then later on, he then tested the rats in different behavioural assets and tried to infer whether any localization of function occurred, which is a fundamental question that is still not answered today.

The question we are focusing on is what is the neural substrate for the generation and maintenance of a motor plan? To answer this question, we plan to re-do the Lashley experiment, but now with better technology, particularly with optogenetics, we can then turn on and turn off neurons at a very precise moment in time.

For example, imagine turning off activity in a specific region of the brain just when the animal is getting ready for a volitional movement and then measuring the effect of that on the subsequent movement. This ability allows us to precisely map regions that might be important and we'd like to really extend this approach.

We have been successful in using this approach in few brain regions, which allowed us to identify a few nodes in the circuit, but I think what we really need is to do this on a more comprehensive scale and across the whole brain. 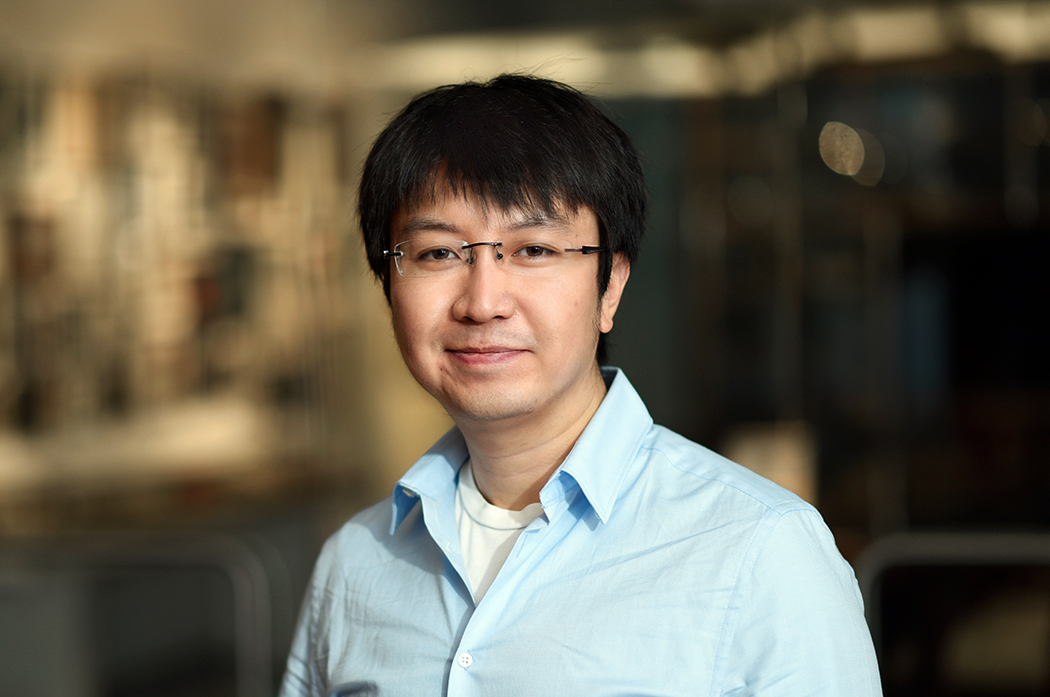 Nuo Li is a faculty member in the Department of Neuroscience at Baylor College of Medicine. His research is focused on understanding how neural circuit dynamics in the brain give rise to behaviour. Prior to joining Baylor, he received his bachelor’s degree in engineering from Washington University in St. Louis, where he worked with Dr. Dora Angelaki on neural mechanisms of spatial perception. He received his Ph.D. in neuroscience from MIT, where he worked with Dr. James DiCarlo on neural mechanisms of visual object recognition. He then joined Dr. Karel Svoboda’s lab at Janelia Research Campus, HHMI, as a Helen Hay Whitney postdoctoral fellow, where he developed tools and methods to study the circuit mechanisms of decision-making in mice. He is a 2017 Alfred P. Sloan Research Fellow, a 2017 Searle Scholar, and a 2018 Pew Scholar.

Understanding how spinal circuits are set up during development may provide insight into degraded motor system performance in mature individuals suffering from diseases or trauma of the nervous system. In the following interview, Dr Tuan Bui outlines how his research could impact the treatment of motor dysfunction due to injury or neurodegeneration.
Q&A

Finding order in the immense complexity of neuronal networks in the brain is one of the central challenges of neuroscience. James Fitzgerald outlines how his lab is tackling this problem.