Your ability to play chess, drive a car, or even just read this article, all depends on your brain’s capacity to link perception with action. Even though research over the last fifty years has revealed much about the brain circuits involved, it still remains a mystery how the brain transforms sensory input into motor output. Dr Sarah Ruediger recently gave a SWC Virtual Seminar outlining her research to address this question. In the following Q&A, she explains her strive to understand the structure and function of the neural circuits that give rise to an animal’s ability to use sensory information to implement purposeful actions. She also explores how these circuits are shaped by experience and learning.

Why is it important for animals to be able to alter their responses to sensory stimuli according to the outcomes their actions produce?

The ability to alter responses to sensory stimuli is important because it allows animals to be flexible and respond to changes in their environment. Essentially this ability adds a layer to the behavioural repertoire that goes from purely hardwired and rather stereotypic behaviours, such as a flight response, to something that can be dynamically modulated by the internal state of the animal and also updated if there are changes in the animal’s environment.

How do you define goal-directed behaviour?

For example, imagine you always give a pet dog a treat when you ask it to sit. If one day you stop giving the treat and the dog no longer acts on your command, then the dog was displaying goal-directed behaviour as it wanted the treat. This test is called reinforcement devaluation and it reveals whether something is intentionally done to get an expected reward.

Why is it challenging to understand the neural basis of goal-directed behaviour?

The main challenge is that it is not mediated by one single structure in the brain – different structures play different roles. Some structures have already been mapped out. For example, we know some structures are preferentially involved in learning; some are involved in processing reward; and others structures mainly represent sensory information that you need to guide behaviour.

In reality, all of these structures are so interconnected that it is challenging to determine what each structure does and what it inherits from other places. The trend in neuroscience at the moment is to take out one circuit element at a time to understand how it affects the computation in a given structure and also how this impacts interacting areas and ultimately the emergence of perception and behaviour.

What insights can an evolutionary perspective provide?

Any brain you look at is the result of its evolution. Some structures in the human brain have been conserved for over 500 million years and they are also present in other animals including frogs. Other structures like the cortex have evolved more recently and it is interesting to understand how the cortex works in relation to the pre-existing structures in the brain. This allows us to understand how our brain operates using structures that are extremely ancient and how it was ‘upgraded’ by more recent changes in evolution.

How much is known about the striatum and optic tectum and their role in goal-directed behaviour?

The striatum is one of the classical sites people look at when trying to understand any form of voluntary behaviour. It is an important structure where sensory information from different modalities is integrated and combined with reward signals that are used to compute whether an action had a good outcome or if it should not be done again. There is a huge field of neuroscience looking at the striatum that aims to understand how this brain structure controls the generation of actions both in health and disease.

The optic tectum is a site that has also been classically investigated a lot. Originally the area was extensively studied in birds as they have a very sophisticated optic tectum with a unique anatomy including layered configurations, which allow researchers to study how sensory information is fed into the structure and how it computes something that leads to a behaviour. For example, the optic tectum has classically been studied in birds of prey, such as owls, that use the structure to hunt their prey.

What mysteries still remain about the striatum and optic tectum (superior colliculus in mammals)?

One of the challenges is that in mammals the anatomy is arranged in a way that means there are multiple interactions between the striatum and superior colliculus so there are different pathways that form loops between the two structures. It is not yet understood how the two structures operate together to give animals an ability to detect sensory stimuli and perform behaviours that are either innate or flexibly shaped by experience or learning. 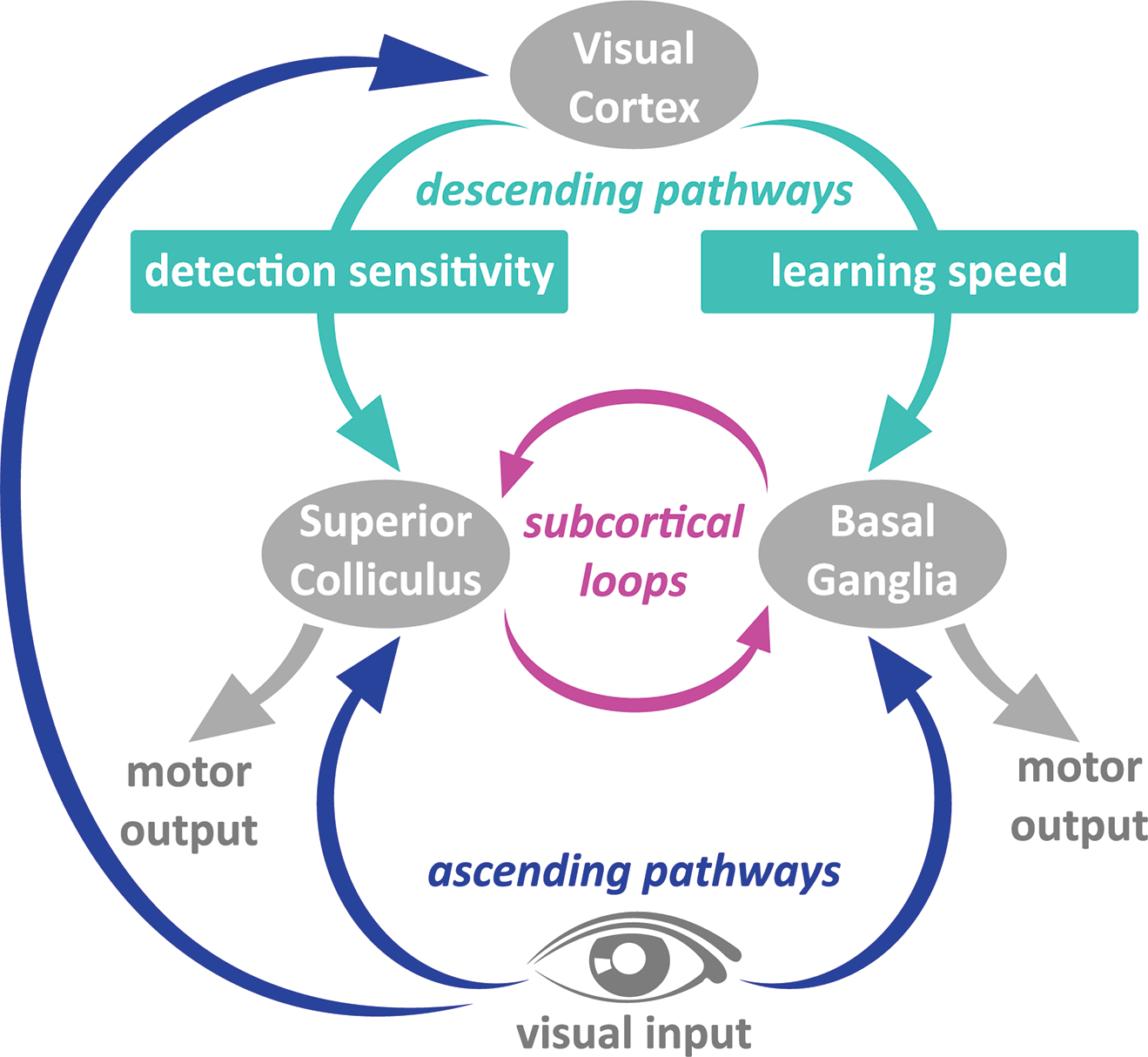 Several pathways broadcast visual signals across brain structures. Dr Sarah Ruediger studies the function of neurons in the visual cortex to understand how they contribute to vision-based behaviour. Studying mice, she recently discovered that brain cells in visual cortex that target the Striatum enhance learning speed whereas brain cells that communicate with the Superior Colliculus increase detection sensitivity, which is ability to see tricky stimuli such as low contrast stimuli.

Can you explain how you combined intersectional viral approaches with optogenetic silencing and surgical lesions in mice to determine the impact of visual cortex on the learning and performance of a visual detection task?

Surgical lesions are the classic approach to determine whether you need a brain area at all. As a refinement of this, we use optogenetic methods as they allow us to acutely and transiently silence a brain area. Optogenetics complements surgical lesions as it doesn’t have the caveat of compensatory plasticity mechanisms that can occur when you have a permanent brain lesion.

Optogenetic silencing of a brain area is well established and works very reliably, however the complete silencing the activity in only a single circuit element one at a time is not always possible.

What were your key findings? What do you think these finding suggest for the contribution of sensory neocortex to goal-directed behaviour?

Even for a very simple form of goal-directed behaviour, such as a visual detection task, cortex has an adaptive contribution. Firstly, cortex enhances the speed of learning and secondly it allows the animals to see trickier stimuli such as low contrast stimuli. Essentially, the cortex acts as an upgrade. The original system exists, i.e. the striatum and superior colliculus, and the cortex acts as an update to the operating system that enhances performance. 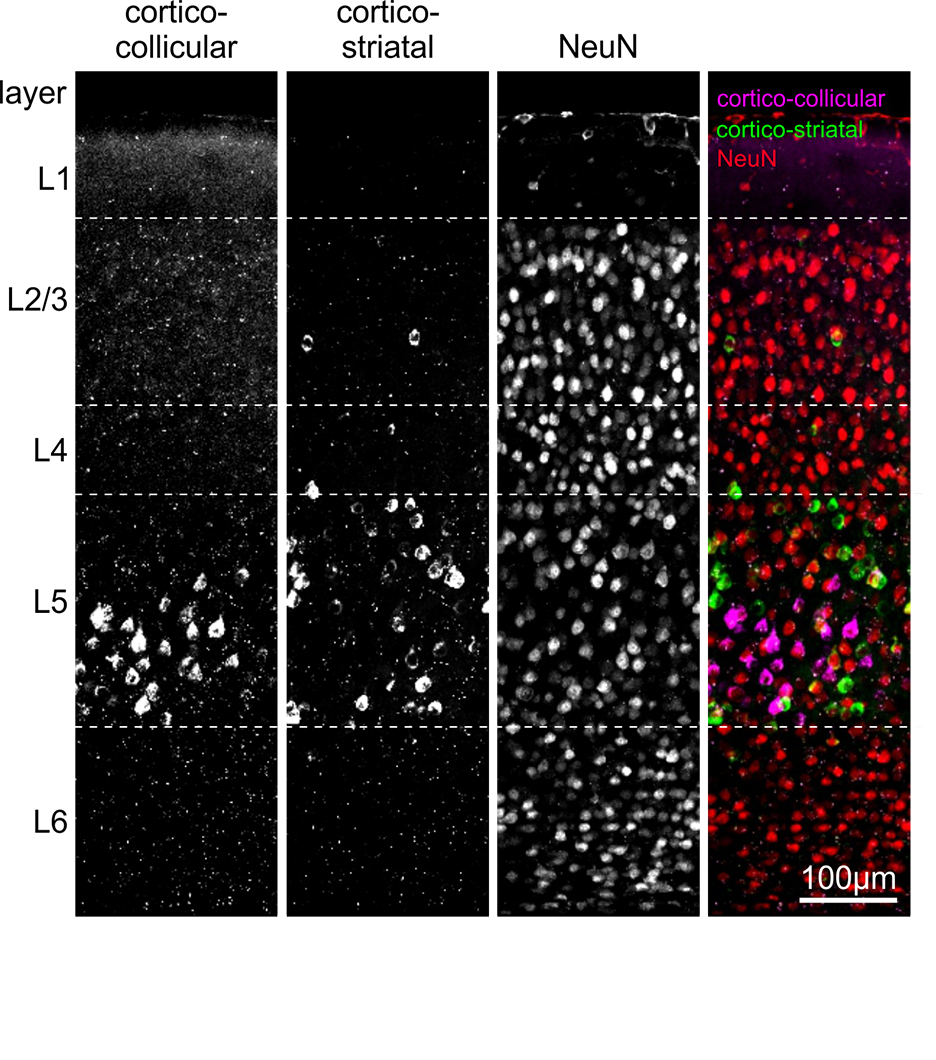 Distinct classes of cortico-fugal neurons form separate communication channels between visual cortex and the Superior Colliculus and the Striatum. 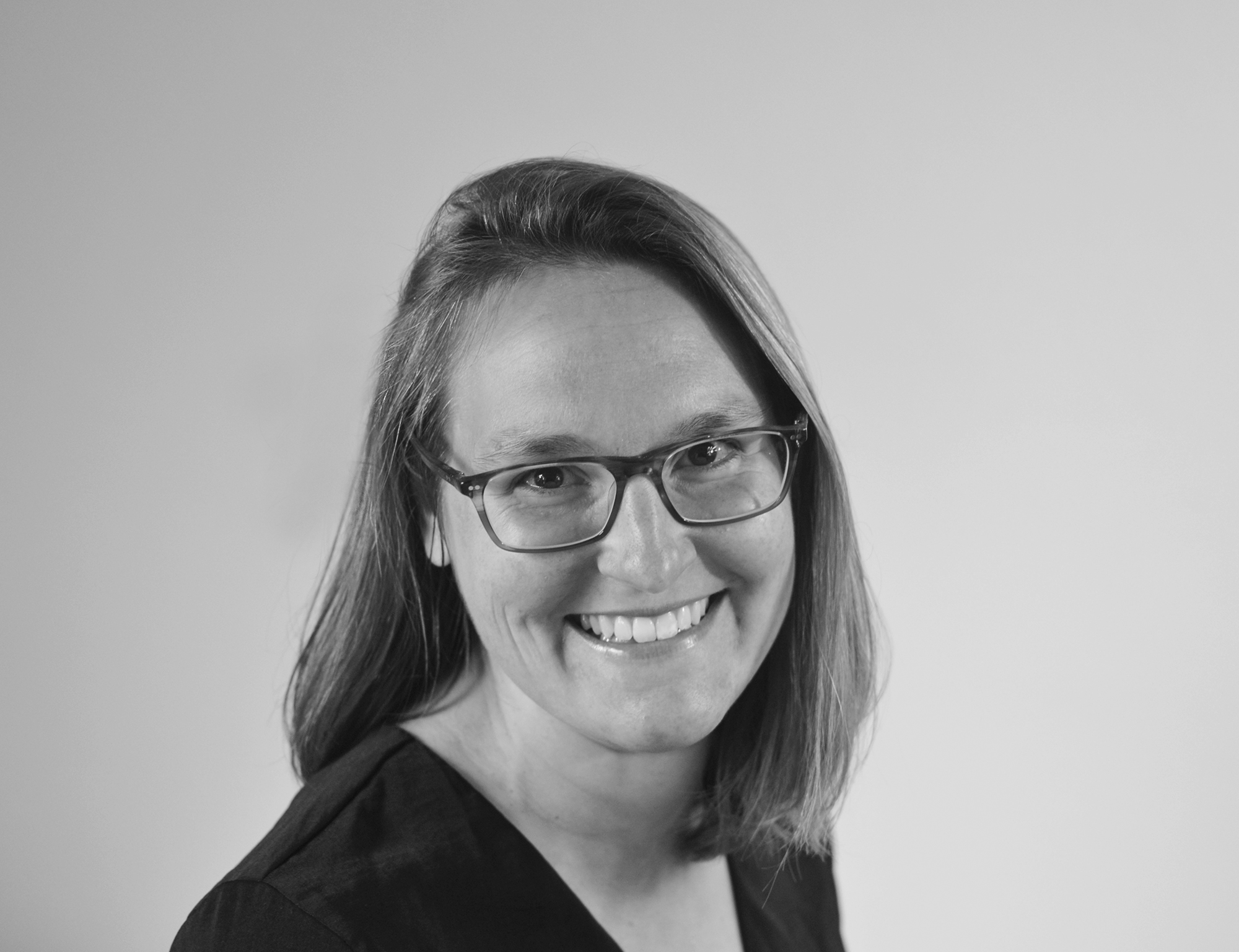 Sarah Ruediger is a postdoctoral researcher in the laboratory of Dr. Massimo Scanziani at the University of California San Francisco and the Howard Hughes Medical Institute. She studied molecular biology at the University of Basel in Switzerland and completed her doctoral training in the laboratory of Dr. Pico Caroni at the Friedrich Miescher Institute for Biomedical Research. Her graduate research focused on the function of structural plasticity in the hippocampus in learning and memory. Sarah was awarded with the ‘Best Publication Award 2011’ by the Swiss Society for Neuroscience for her research on the role of structural plasticity in memory precision and she received the Ed Fisher Award for the best Ph.D. thesis by the Friedrich Miescher Institute. Sarah’s postdoctoral research focuses on the function of visual cortical circuit elements in the learning and performance of visually guided behaviour. She combines intersectional viral approaches with state-of-the-art methods to record and perturb neuronal activity to reveal the neuronal substrate that underlies the emergence of perception and behaviour. Her postdoctoral studies were supported by postdoctoral fellowships from European Molecular Biology Organization and the Swiss National Science Foundation. Sarah’s research was published in major scientific journals and her work was highlighted by renowned leaders in the field. Sarah’s long-term research goal is to contribute to our understanding of the circuit mechanisms that enable the brain to link perception with action and to unravel how the transformation of sensory input to motor output is dynamically regulated from one moment to another. 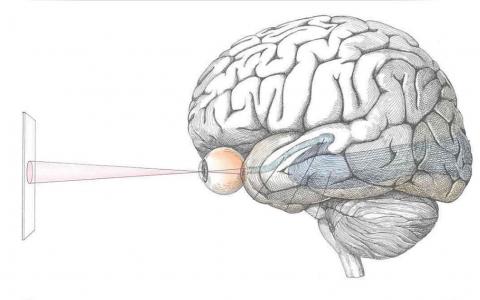