An international collaboration of neuroscientists have today published a paper in Nature demonstrating the breadth of neural communication in visual cortex using a combination of methods for tracing the projections of individual neurons across the brain.

In classical models of the visual system, information flows from ‘primary’ visual cortex (V1) to more specialized, downstream areas that focus for example on image movement or image form. However, the details of how individual cells carry this information are not understood.

Professor Tom Mrsic-Flogel, one of the senior authors of the paper and project leader at Biozentrum, University of Basel and Director of the Sainsbury Wellcome Centre commented:

“Understanding the fine-scale anatomy by which individual neurons distribute signals to their targets is a crucial step for forging the relationship between neuronal structure and function.” 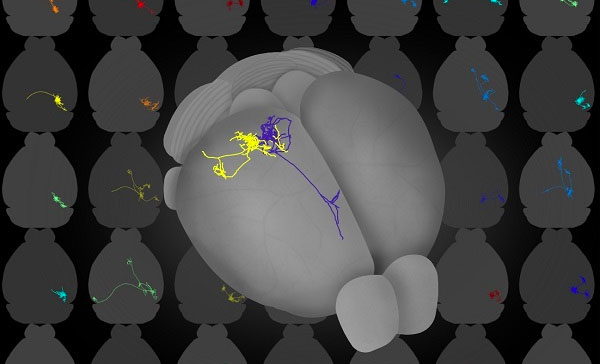 The diversity of single-cell projections from mouse visual cortex revealed by fluorescence-based tracing. Each panel in the background shows the traced axon of a single neuron from the upper layers of primary visual cortex. The grey outlines are the brain borders. The foreground brain contains two traced cells overlaid in different colours.

Up until now, it had remained unclear as to whether information transfer from primary visual cortex was largely “one neuron – one target area”, or if individual neurons distributed their signals across multiple downstream areas.

While the research, conducted by neuroscientists from the Sainsbury Wellcome Centre for Neural Circuits and Behaviour, in conjunction with Cold Spring Harbor and Biozentrum, confirmed the existence of dedicated projections to certain cortical areas; the scientists found that these were the exception and that the majority of primary visual cortex neurons broadcast information to multiple targets.

Justus M. Kebschull, one of the first authors on the paper at Cold Spring Harbor commented:

In the Nature paper, the team outline the two complementary methods they used to map the projection patterns. Firstly, they used whole-brain fluorescence-based axonal tracing by labelling neurons in the right visual cortex of each mouse with GFP and then imaging axonal projections by whole-brain serial two-photon tomography.

The Allen Mouse Brain Reference Atlas was then used to identify the areas in which axonal terminations were observed. The mouse primary visual cortex (V1) neurons were found to have a high degree of projectional diversity and most of the individual layer 2/3 neurons were found to distribute information to multiple areas rather than projecting to a single target. Such neurons were termed ‘broadcasting neurons’.

Secondly, the researchers used high-throughput DNA sequencing of genetically barcoded neurons (MAPseq) to determine whether the broadcasting neurons were targeting cortical areas at random, or whether they preferentially target, or avoid, specific subsets of areas thereby indicating a higher-order structure.

Thousands of individual V1 neurons were uniquely labelled with random RNA sequences, in essence barcodes. Each labelled neuron then transports the barcode into its own axonal processes where they can be read out by high throughout sequencing of a dissected target area to determine the projection targets of that specific neuron to higher visual areas.

“The RNA sequences, or ‘barcodes’, that we deliver to individual neurons are unmistakably unique and this enables us to determine if individual neurons, as opposed to entire regions, are tailored to specific targets.”

The researchers state that the results of the study “suggest a functional specialization of subpopulations of projection cells beyond ‘one neuron – one target area’ mapping.

“The next piece of the puzzle will be to understand what each of these projection motifs does for visual processing and perception and how these long-range connectivity patterns are established during development,” Professor Mrsic-Flogel concluded.

Read the full paper in Nature: The logic of single-cell projections from visual cortex By Yunyun Han, et al.