Up until now, few studies have measured and modelled the activity of multiple cell classes in parallel. In a new Nature Neuroscience paper a team of experimental and theoretical neuroscientists at the Sainsbury Wellcome Centre and Gatsby Computational Neuroscience Unit describe how they have begun to disentangle the web of neurons in the part of the neocortex that processes visual information. 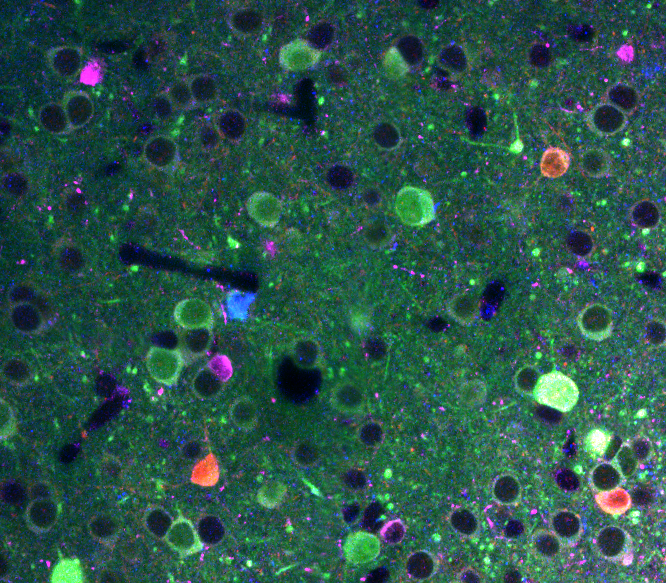 The neocortex consists of many different types of neurons that either excite or inhibit other cells, forming complex circuits. To start to understand how these different classes of neurons interact, Adil G. Khan et al. simultaneously imaged the activity of excitatory pyramidal cells, and three types of inhibitory interneurons while mice learned to discriminate between two visual patterns in a virtual reality environment, associating one with a reward.

The authors found that two specific circuit elements – pyramidal cells and parvalbumin-expressing interneurons - became much better at discriminating between the two visual patterns that were relevant for the task the animals learned. A computational model indicated that this increased stimulus selectivity resulted at least in part from the formation of stimulus-selective ensembles of neurons of the two cell types. Conversely, SOM cells became decoupled from the rest of the network during learning and the researchers propose that they act as a gate for plasticity.

One key element of the study was the close collaboration between experimentalists and theorists. “By condensing the experimental observations into a simple computational model we were able to isolate an essential set of circuit modifications that could reproduce a range of measured changes in activity”, commented Maneesh Sahani, Professor of Theoretical Neuroscience and Machine Learning, Gatsby Computational Neuroscience Unit.

“The changes that take place in visual cortex during learning probably make it easier for the animal to perform the task and to discriminate and respond to the behaviourally relevant visual patterns”, explained Sonja Hofer, Reader in Neural Circuits and Behaviour, Sainsbury Wellcome Centre. “This work has advanced our understanding of how the brain tunes-in to relevant stimuli in a constantly changing environment,” she continued.

In the future, the researchers hope to determine the changes in synaptic contacts between neurons that underlie the observed learning-induced changes as well as the role of input from other brain areas.