Our perception of the environment relies on information flow from the sensory organs to the brain. However, perception is also highly dependent on the context in which a given stimulus occurs, such as the sensory surround and the animal’s behavioural state, its intentions, expectations and actions. Such contextual signals can strongly modulate sensory responses and influence how sensory information is interpreted. Current research in the lab is focused on understanding how sensory information is processed by the brain in the context of behaviour, especially focusing on the role of thalamo-cortical and intracortical interactions. We are for instance interested in how different contextual signals are integrated with feed-forward visual information and how they influence perception, how such signals emerge during learning and by which pathways they are conveyed.

To study these questions we use a wide range of multi-disciplinary methods: in vivo two-photon imaging and other imaging approaches, extracellular and intracellular electrophysiological recordings, animal behaviour and circuit modelling, together with molecular and genetic approaches to identify different cell types, record and manipulate their function and trace specific pathways.

What is the organization and function of higher-order thalamo-cortical circuits?

Contextual signals are typically attributed to ‘top-down’ projections from other areas of the neocortex. Yet higher-order sensory nuclei in the thalamus, such as the pulvinar, interconnect extensively with many cortical and subcortical areas, and could thus act as an internal reference to link sensory signals to the visual and behavioural context. The functions of sensory higher-order thalamic nuclei remain unclear and the nature of the signals they convey to cortex is poorly understood. We are studying the fine-scale organization of higher-order thalamo-cortical pathways, and what information they bring to different cortical areas. By combining in vivo two-photon imaging of axonal projections, anatomical tracing, in vivo electrophysiology, optogenetics, animal behaviour and in vitro circuit mapping, we aim to determine the role of these pathways during visual processing. Moreover, we are investigating the different sources of inhibition of thalamic pathways to test their role in regulating thalamo-cortical interactions and controlling sensory information flow.

How is the communication between cortical areas dependent on behavioural context?

Cortical areas are interconnected through long-range projections that are almost always reciprocal, forming feed-forward, feed-back and lateral pathways. These complex networks are thought to support the integration of diverse sensory, motor, and cognitive representations and to ultimately generate our vast cognitive and behavioural repertoire. However, while the anatomy of intra-cortical projections is relatively well described, for many of them we know little about what information they convey, what impact they have on the target region and how they are influenced by context. One aim in the lab is to study inter-areal communication and the flow of behaviourally relevant information between cortical areas. We want to understand how dynamic cortical information flow is, and how it is shaped by learning and behavioural demands.

How is sensory processing changed during learning?

How a stimulus is perceived and what behaviour it triggers is strongly dependent on what prior knowledge is associated with it. However, it is still relatively unclear how learning the behavioural relevance and context of sensory stimuli changes their processing in the brain. How is the function of individual cells, their interactions and information flow through sensory and sensory-motor pathways changed by learning? To study this question, we are developing diverse behavioural paradigms for mice in which they have to learn visually-guided tasks. We are particularly interested in the following questions: How does synaptic and functional connectivity within and between different brain areas change with learning? Do primary sensory circuits change or are changes mainly expressed in top-down inputs from higher brain areas? How is the higher-order thalamus involved in the induction and expression of plasticity? How relevant are learning-related changes in sensory circuits for the behaviour of the animal? Is output connectivity from specific sensory circuits to motor-related areas changed by learning? 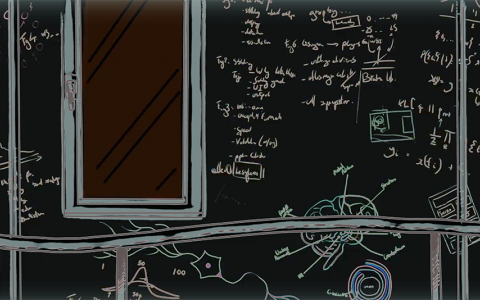 Understanding how brain areas communicate is one of the oldest questions in neuroscience. Researchers at the Sainsbury Wellcome Centre at UCL used causal techniques to uncover how two neocortical areas in the brain communicate with one another and found that their influence on each other changes over much faster-timescales than previously thought. 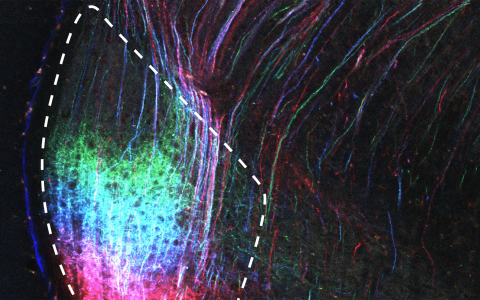 Researchers at the Sainsbury Wellcome Centre have discovered a brain mechanism that enables mice to override their instincts based on previous experience. 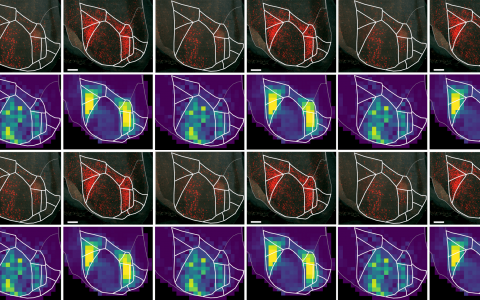 Sonja Hofer and her team at SWC are trying to uncover the precise organisation and function of a higher-order thalamic nucleus called the pulvinar, which is the largest thalamic area in humans and is strongly interconnected with the part of the cerebral cortex responsible for vision.