Memories guide most of our behaviours every day. We know that the hippocampus is critically important for forming memories of our experiences, but it has been challenging to understand how neural activity in this region represents the content of distinct memories. In a recent seminar at SWC, Assistant Professor Dmitriy Aronov shared his research studying the relationship between hippocampal activity and episodic memory in the black-capped chickadee, a specialist food-caching bird that stores food items at concealed locations and uses memories to retrieve their caches later in time. In this Q&A, Dr Aronov shares how studying neural activity in the hippocampus of black-capped chickadees can help us dissect the circuits for episodic memory.

What are episodic memories?

This definition of episodic memory is useless for animals, as they cannot tell you verbally what they did. Instead, episodic memory in animals is typically defined as a ‘what, where, when’ memory. If an animal can remember what happened, where and at what time, then that is an episodic memory.

How does the brain determine which parts of experiences to capture snapshots of to form episodic memories? Which information is useful to extract?

This is a big unknown! We experience thousands of things every day, but we don’t remember all of them. Valence is one thing that matters – if something is particularly rewarding, or particularly punishing, then it will be remembered. Experiences that are highly pleasurable or highly painful are remembered more than neutral experiences.

Events that are unexpected also get remembered more. For example, you don’t remember your daily commute taking the train from one station to another that you have done hundreds of times. However, if one day the line was closed and you had to take another line, then you would remember that journey.

Reward, punishment and unexpectedness are three things that are remembered, but also people do remember random things for no reason and we don’t fully understand why. We know that we don’t have the mental capacity to remember every little thing that happens in our lives. Also it would be a huge waste of resources in the brain to remember everything.

Is it known how long episodic memories last?

That depends upon the species and also the kind of episodic memory. In humans, some episodic memories last decades. If something is particularly salient, you can remember it for the rest of your life.

In birds, memories of caches can last months. Some birds will cache food in the fall and retrieve it the following spring to feed their babies. For chickadees that I study, these episodic memories typically last several hours because they tend to retrieve their food within a few hours after caching.

How much is known about the role of the hippocampus in episodic memory?

Since the work of Brenda Milner in the 1950’s, we’ve known that people with hippocampal damage, either due to injury or surgical intervention or infection, are unable to form memories. People who have hippocampal damage will remember everything that happened prior to the hippocampal damage including details from their childhood, but they won’t remember a conversation they had with you five minutes ago. We know that the hippocampus is critically important for episodic memories, but we don’t know how it does it.

Is the hippocampus evolutionarily conserved across vertebrates? Why is this important?

The hippocampus appears to be evolutionarily conserved across vertebrates. If you look at how embryos develop, you can find the hippocampus in every vertebrate starting from fish all the way up to mammals. While it was known that the hippocampus is important for memories across all these species, until recently it wasn’t clear whether neural activity in the hippocampus was similar. We have shown with our recordings in birds that the activity is also similar.

Why is this important? When something is this evolutionarily conserved, it has some fundamental function for the animal. Memories are a fundamental aspect of animals’ lives as they all experience events throughout the day that they need to remember. Episodic memories seem to be a feature that is important to all vertebrates. When a feature like that is very important, the organs in the body that participate in that function are conserved. It seems that the hippocampus is incredibly conserved in evolution across all these distinct vertebrates, so what it does seems to be very important for experience.

Why is it important to us as neuroscientists? It is nice to study structures that are conserved across animals as it means that whatever we find in birds will be directly relatable to the body of mammalian work, including clinical work done in people. It means that we’re not just studying a highly specialised system in birds, but just one example of a memory system that exists in us as well. That is not to say that if this was just a highly specialised caching system it wouldn’t have been interesting to study. Neuroscience is full of excellent examples of highly specialised systems that are very interesting to study and extract fundamental principles. But in our case, it’s really directly relatable to work on humans and other mammals.

Why does your lab study the black-capped chickadee to understand the relationship between hippocampal activity and episodic memory?

There are several reasons. Firstly, the black-capped chickadee provides us with an amazing example of episodic memory – it is one of the most robust examples known. Food-caching is how episodic memory was first discovered in animals by Nicky Clayton about thirty years ago. When a behaviour is this robust, it is very convenient to study in the lab. It is easy to get the animals to do food-caching and they don’t have to be trained to do so. Neuroscience has many examples of where scientists have studied an organism that is specialised for a particular function. Choosing specialists is often very advantageous.

Secondly, birds have a somewhat simplified organisation of the brain compared to mammals, so dissecting the circuit for memory should hopefully be a little bit easier in birds because there is a smaller number of brain areas involved and they are much more compactly organised and delineated than in mammals. 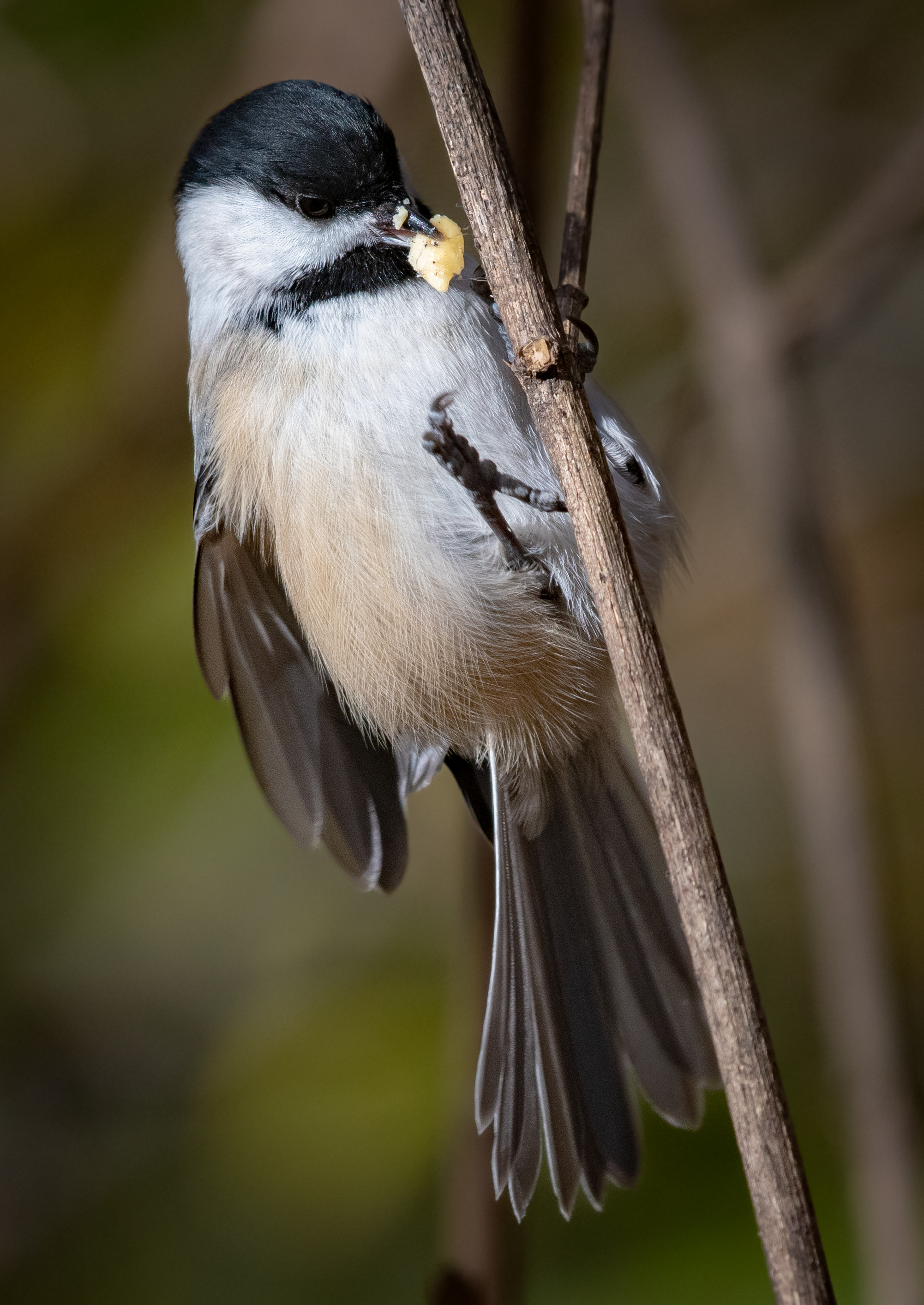 How does the chickadee differ from other food-caching birds?

We chose it mostly for convenience. They are local to New York where I work and they are extremely common there. It is also a tiny bird, about the size of a mouse. This means we don’t have to design gigantic enclosures where these birds will behave. For example, a raven is another bird that caches its food. But if I were to study ravens, my experimental set up would need to be much bigger.

The fact that chickadees are really well matched in size to mice, which are typically used in neuroscience, means that many of the technologies are transferable. Chickadees are also notoriously well-adapted to human presence and they are not stressed by captivity compared to many other birds so they are a pleasure to work with. 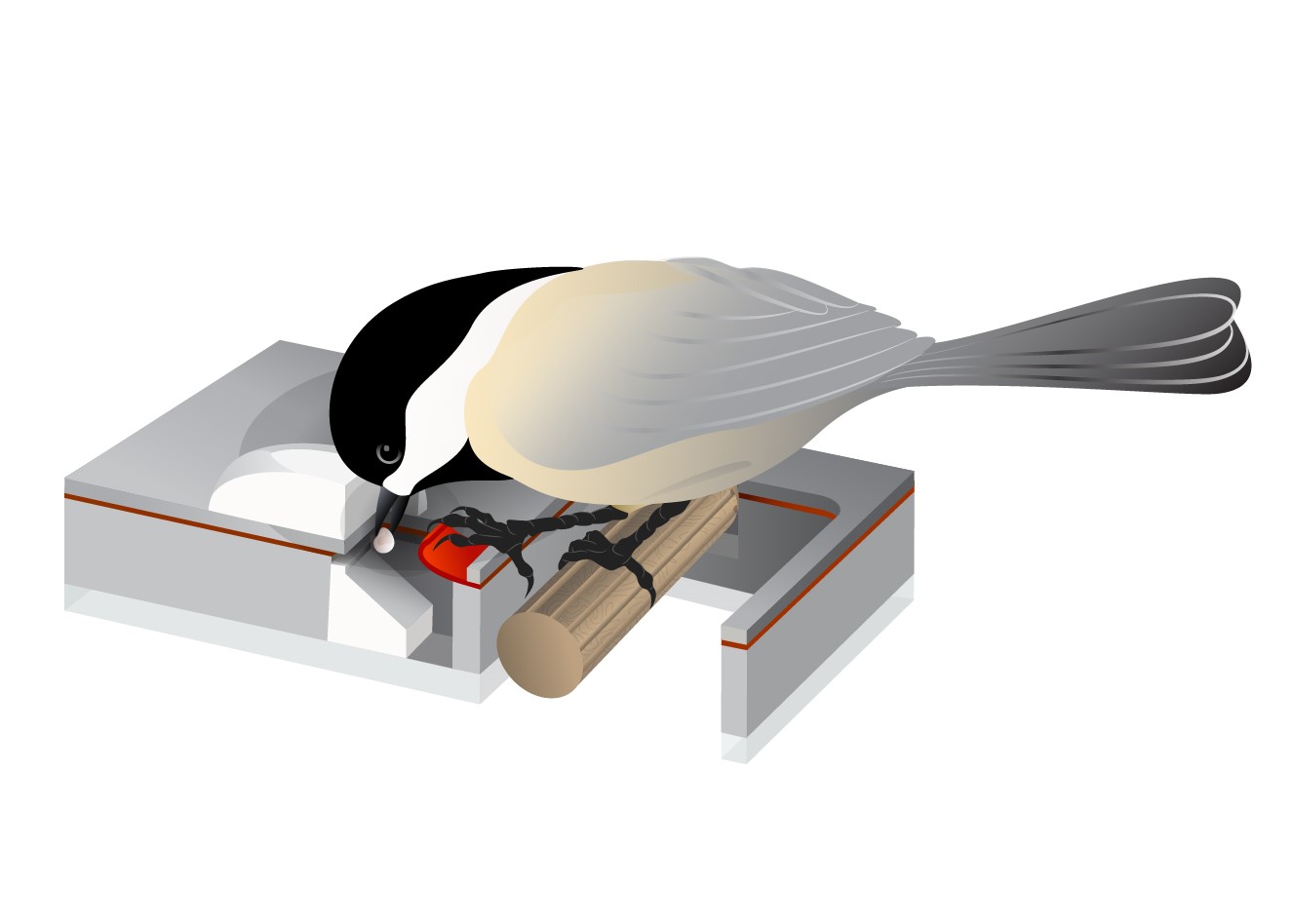 How have you designed behavioural arenas to study these behaviours in laboratory conditions?

We’ve been trying to observe birds as much as possible to understand what they do and don’t like. We needed the birds to guide us. Originally, we thought that we needed to build an arena with wooden structures similar to trees so that they could cache their food like they do in the forests of their natural habitat.

Upon observing these birds, we noticed that they were caching just fine in these tree-like structures, but what they really liked was going to the thermal insulation around the arena and pushing food into it. The thermal insulation was a soft, springy material under which they could store seeds. We realised that this was similar to the soft bark and birch trees that they put seeds underneath in the wild.

And so we designed an arena that was more similar to what they like, with little rubber flaps that the birds can pull open to cache seeds underneath. This naturally led my graduate student Marissa Applegate and I to come up with the idea of putting a camera underneath the arena and we realised there are many advantages to this. The arena was partially creative design and partly evolution as we allowed the birds to show us what behaviours they liked to do and we adapted to that. It involved many, many hours of observing chickadees!

What have been your key findings so far and what are the main implications?

The overarching key finding is that neural activity patterns during spatial navigation in birds are remarkably similar to the patterns we have found in mammals before. This was a big surprise to us, because if naively you looked at the bird brain and the mammalian brain, you wouldn’t say there was anything similar between them.

In spite of this divergence in brain structures and the evolutionary distance between these organisms, the firing patterns are remarkably similar. This has been a revelation. We think that many of the details that people have been studying in the hippocampus must be fundamentally important for memory, as they have been preserved in these food-caching birds that are so far apart in evolution. One key implication is that food-caching birds can be used as a very robust model. By studying these birds, we can learn about the hippocampus in general, not just about food-caching behaviour in birds.

What’s the next piece of the puzzle your research is going to focus on?

There are several pieces of the puzzle. One of the most interesting things to me is how are these memories used to drive behaviour? The hippocampus has these activity patterns that are related to memory, but the bird then acts on those memories. When a bird recalls the memory, it goes to a particular location to retrieve that seed. So somehow these memories that are recalled somewhere in the brain are translated into actions on the ground. I think that will be critical to understanding how those actions happen.

In humans, memories can lead to all sorts of behaviours. Most of your behaviours every day are guided by memories. Language is guided by memory. For example, if I asked you what you had for dinner last night, you will answer using language. Your memory drives the language output. In birds, the action is much simpler. The bird simply decides to go to a particular location and either retrieve a seed, eat it, or cache it. 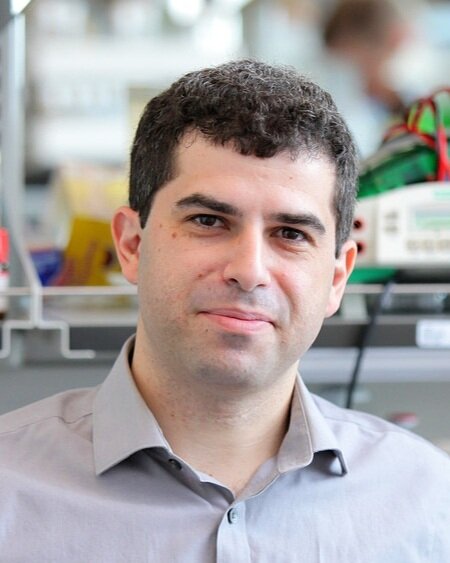 Dmitriy Aronov is an Assistant Professor of Neuroscience at Columbia University's Zuckerman Mind Brain Behavior Institute in New York City. He received an undergraduate degree in applied mathematics at Columbia, followed by a doctorate in neuroscience at MIT studying the birdsong system with Michale Fee. He then completed a postdoctoral fellowship with David Tank at Princeton University, studying the rodent hippocampus. In his lab, Dr Aronov has combined these past research interests to begin studying the role of the hippocampus in episodic memory using specialist food-caching birds. He is a recipient of several awards, including most recently the NIH Director's New Innovator Award. 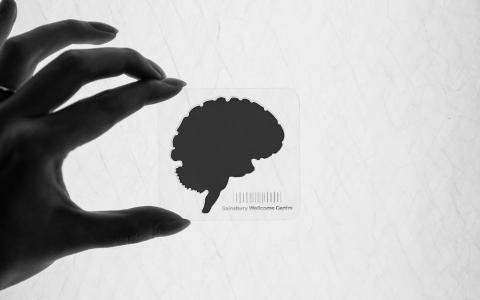 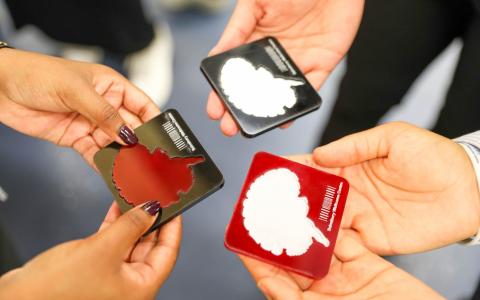