Neuroscientists discover changes in cortical mapping depending on behavioural state

Brain circuits are heavily interconnected, and during even the simplest behaviours billions of neurons send long-range messages to and from many specialised areas. While scientists have spent years mapping anatomical projections and monitoring activity from individual neurons, little is known about how signals sent by individual neurons relate to the larger, bidirectional communication that underlies complex behaviour.

Neuroscientists at the Sainsbury Wellcome Centre report today in Nature Neuroscience on a new approach that offers insight into these complex neural conversations. The authors find that some neurons act as local representatives of activity happening in distant areas, highlighting that individual neurons can shift their affiliation patterns depending on the animal’s behavioural state. 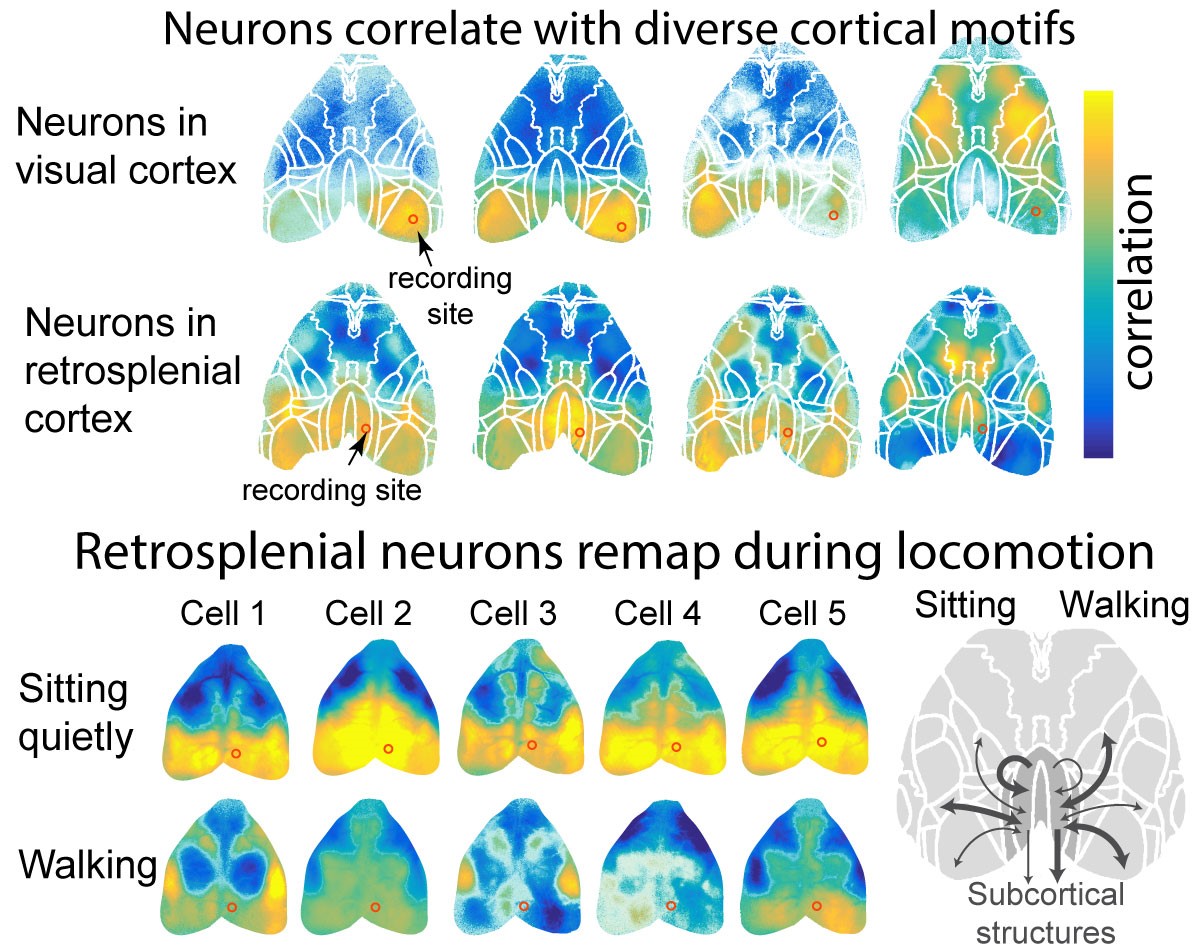 The spiking of neurons was correlated with cortex-wide calcium activity to uncover their affiliation motifs (example from four cells in visual cortex and four cells in retrosplenial cortex; recording site circled in red). Neighbouring neurons independently affiliated with diverse local and distal areas. These affiliations were dynamic-- particularly in retrosplenial cortex, where neurons were strongly locally coupled in sitting animals, but became affiliated to distal sensory, motor and sub-cortical areas when animals were walking . This remapping suggests that locomotion shifts cortex into a feedforward, sensory-driven processing mode relevant for navigation.

Non-invasive brain imaging techniques such as FMRI indicate that during certain behaviours, widespread areas of the brain can fluidly couple with one another. For example, the default mode network is a distributed set of brain areas that become active together when a subject is daydreaming but deactivated when the subject becomes mentally engaged. But techniques such as fMRI are unable to resolve the activity of individual neurons and so it remains mysterious how these flexible, state-dependent dynamics arise and are regulated.

To elucidate these mechanisms, the present study combined the much higher resolution approaches of electrophysiology and population calcium imaging to construct maps of the cerebral cortex during specific sensory and motor tasks, detailing how individual neurons link-up to more widespread brain activity. First author, Kelly B. Clancy, commented:

“We attempted to bridge cellular and brain-wide scales by imaging calcium activity across dorsal cortex while simultaneously recording spikes from individual neurons in primary visual cortex (responsible for processing our visual experiences) and retrosplenial cortex (involved in navigation and memory).”

“We found many cells correlated strongly with the area where they resided, as we’d expect (for example, visual cortex neurons correlate with others visual cortex).  But a minority were more correlated with activity elsewhere. Rather than diffusely modulating the activity of a population of cells, at least some long range projections may directly drive neurons in their target areas—so, in a local network, some neurons may act as ‘local representatives’ of activity happening in distant areas, in a small-world manner.”

The spiking of individual neurons was correlated with these cortex-wide patterns to determine how neural firing was affiliated with activity in distant areas (video courtesy I. Orsolic).

The researchers also found that the maps could change depending on the animal’s behavioural state. The changes in retrosplenial cortex were particularly dramatic. In animals sitting quietly, most neurons were correlated with the rodent correlate of the default mode network, but when animals started walking, the neurons in RSP became much less locally correlated and instead coupled to distant sensory and motor areas. This is evidence of something very like a default mode network in rodents from direct activity measures, and not just hemodynamic proxy.

“Individual neurons could also switch their affiliation patterns independently of each other, suggesting there must be a mechanism that dynamically restructures information flow --a neuron’s inputs can be sculpted on the fly. Interneurons are a good candidate for mediating this switch, and indeed, we found evidence that a class of inhibitory interneurons are involved in the network shift between walking and sitting still.” 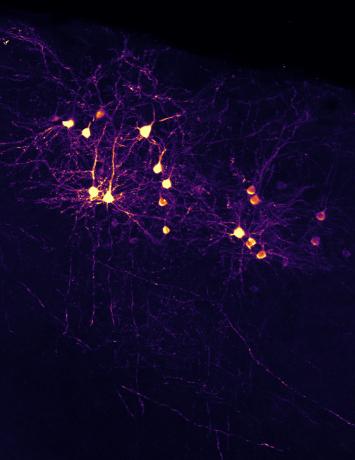